A Bottle of Rum Born Out of Battle 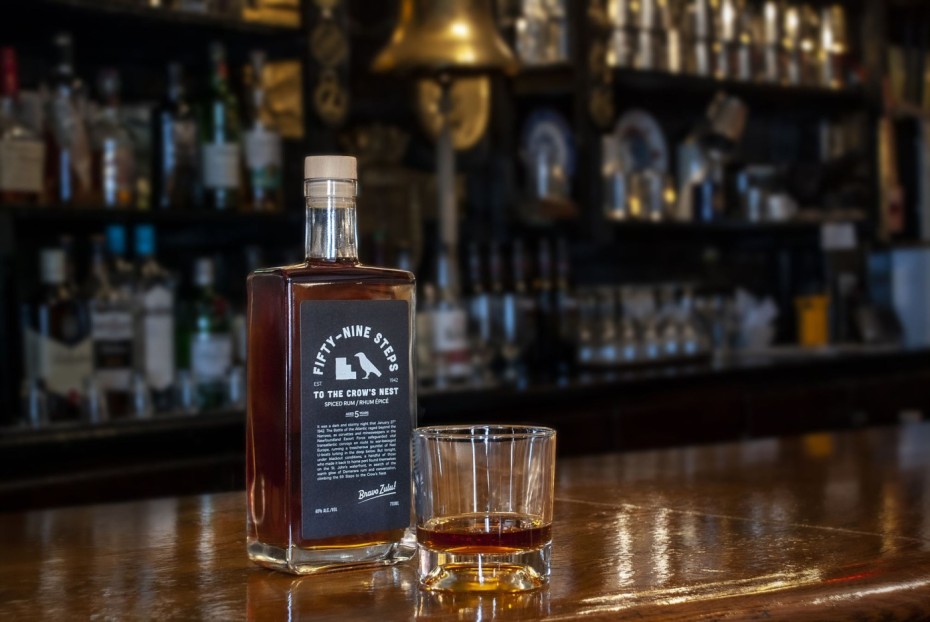 Rum is a decidedly maritime liquor conjuring images of pirates, the Caribbean, and, on occasion, Pirates of the Caribbean. Sea-faring folk have always appreciated the sugarcane-sourced libation, and, on a stormy night in January 1942, surviving naval officers of World War II’s “Battle of the Atlantic” arrived in St. Johns, climbed fifty-nine steps and sipped some in what they christened “a snug little crow’s nest.”

That rum serving refuge became Newfoundland and Labrador’s first Seagoing Officers’ Club—The Crow’s Nest. Designated as a National Historic Site and Registered Heritage Structure, the bar and living museum observed its 80th anniversary by creating its own brand of demerara rum as a tribute to its origins.

“We made the story of the Crow’s Nest the brand story. And the brand,” says Noel O’Dea, president and founder of Target. “The label itself we designed to be an honest reflection of the era— with the look and feel of handcrafted letterpress and woodblock.”

In a delightful bit of synchronicity, the story of the Crow’s Nest is also Target’s story. Both the Nest and the agency, the longest standing independent ad agency in Canada, reside under the same historic roof on one of the oldest streets in the oldest city in North America.

“Today, as then, people weren’t buying ‘rum.’ They were buying social lubrication. Comradeship. Community,” says Gary Walsh, Immediate Past President of The Crow’s Nest. “The Crow’s Nest was delighted to work with Target and the Newfoundland Distillery Company for this initiative. We produced a fine dark rum, with a creative and informative label, that has been a huge success. The Club greatly appreciates the outstanding contributions made by both.”

About The Crow’s Nest
At the height of the Battle of the Atlantic in World War II, in 1942, St. John’s was the home port for the Newfoundland Escort Force. The Crow’s Nest Officers’ Club served as a retreat, for the remainder of the war, where allied naval and merchant officers could relax, share their stories of victory and loss, and have a home-cooked meal. The Club has become a living museum, owned and supported by volunteer members, that commemorates the contribution of the Royal Canadian Navy, the Royal Canadian Navy Reserve, and the Royal Canadian Navy Volunteer Reserve during World War II. Learn more here.

About Target
Target is an award-winning and independently owned advertising agency and brand architecture firm. Founded in 1980, Target is based in St. John’s, Newfoundland, the most easterly point in North America. Beyond Newfoundland and Labrador Tourism, Target’s clients list spans many industries, including tech, CPG, higher education, and the emerging cannabis sector. Target was named Canada’s inaugural Small Agency of the Year and is one of only 20 agencies in Canada to win a Gold Lion at the Cannes International Advertising Festival of Creativity.
targetmarketing.ca