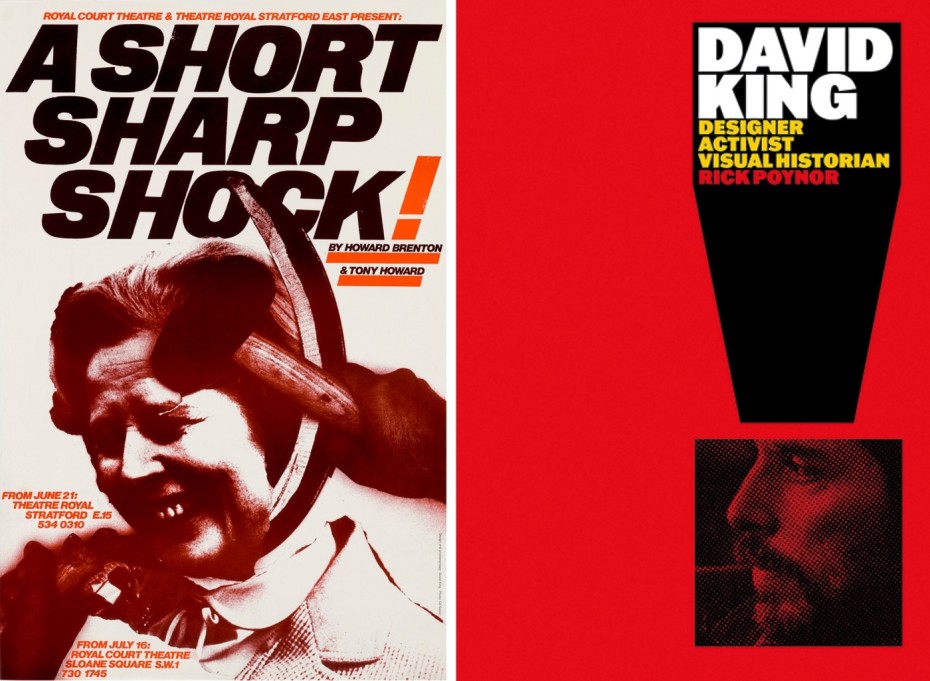 Talk about a short, sharp shock. The spectacular flame-out of Liz Truss – who now holds the record for the shortest tenure of any British prime minister in history (a mere 44 days) – was just as surprising for its naivety as for its brevity. Given Truss’s boundless adulation of the Iron Lady, one could easily imagine her face in place of Thatcher’s in the above photomontage, a piece of biting satire that pays homage to the tradition of Weimar-era German graphic activist John Heartfield.

The photomontage of Thatcher is by the late British designer/photographer/activist David King, whose career was comprehensively documented by Rick Poynor in the 2020 release of the book pictured above right. As a designer, David King is not as well-known on this side of the pond as he was and is in the UK, probably because of his socialist leanings. What he is known for in North America is perhaps the world’s most exhaustive collection of post-revolutionary posters, photographs and photomontages from Soviet Russia, a vast body of work amassed over four decades and smuggled out of Russia at great risk to his personal safety. It is now housed in the Tate Modern in London.

King was a lifelong leftist of whom fellow designer Roger Huddle said “I think the montages of Heartfield and the typography of David created the look of the left in the 70s and 80s.”

John Heartfield’s fierce critique of Hitler’s Nazi Germany forced him into exile, first in Prague and then London. He died in East Berlin in 1964.

Left: Heartfield’s anti-fascist protest against the Japanese invasion of China in the 1930s. Right: King’s variation on it, reporting on the Russian invasion of Czechoslovakia in 1968.

The ‘Short Sharp Shock’ title refers to the economic doctrine brought to life by the likes of Margaret Thatcher and Ronald Reagan, inspired by hardcore libertarian economists Ludwig von Mises, Milton Friedman and Friedrich Hayek. Activist journalist Naomi Klein’s 2007 book Shock Doctrine comprehensively documents the effects of this free-market philosophy when it was ruthlessly and violently imposed on countries like Chile, Bolivia and Argentina in the 80s and 90s. It has since spread like a virus across the planet. Liz Truss’s tone-deaf tax policies were but one manifestation of her wish to bring Thatcher, Reagan and their neoliberal gurus back from the dead. 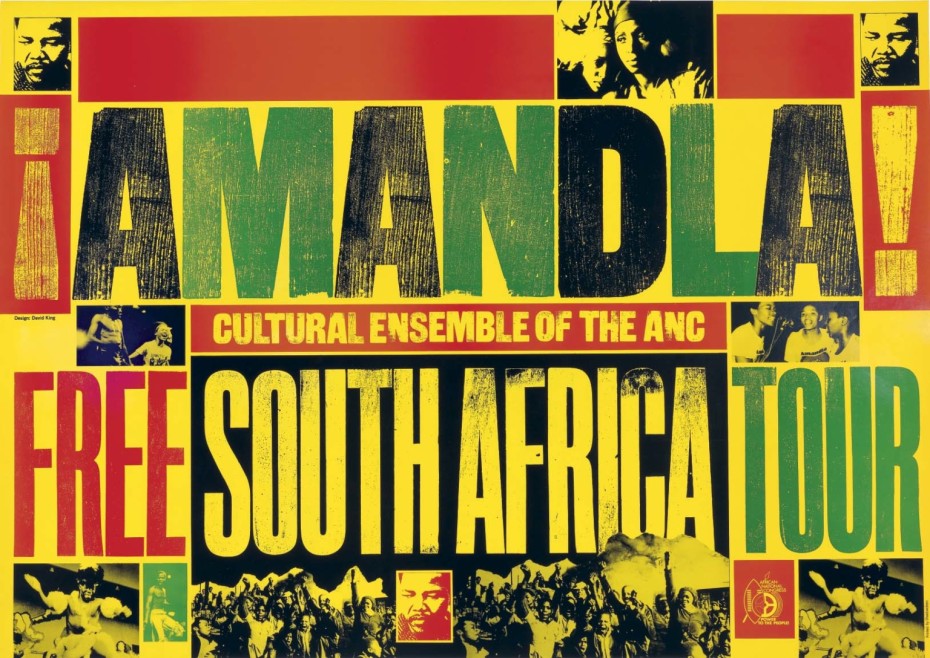 Above: King was a master of imbuing visual language with revolutionary urgency, as demonstrated by his signature use of vivid contrast, big bold distressed type and photomontage. Poynor points out that for his massive titles, he would photocopy woodblock type and paste the letters he needed onto the artwork, giving it an abrasive edge.

We are now living through the long-term effects of those free market policies: extreme income inequality, endless war, environmental disaster, the rise of authoritarian regimes, the slashing and privatization of social programs, and the disintegration of democracy. Looking back on how passionately and effectively King embraced causes like anti-apartheid, anti-fascism and anti-war, you can just as easily imagine his bold visual activism on the streets of today. As journalist Mark Porter pointed out in his review of Poynor’s excellent monograph, “At a time when the world is confronting immense challenges, and much graphic design has become a matter of pure visual styling, David King’s work is a reminder that design can be engaged with important themes and be driven by a passionate desire to make the world a better place.” 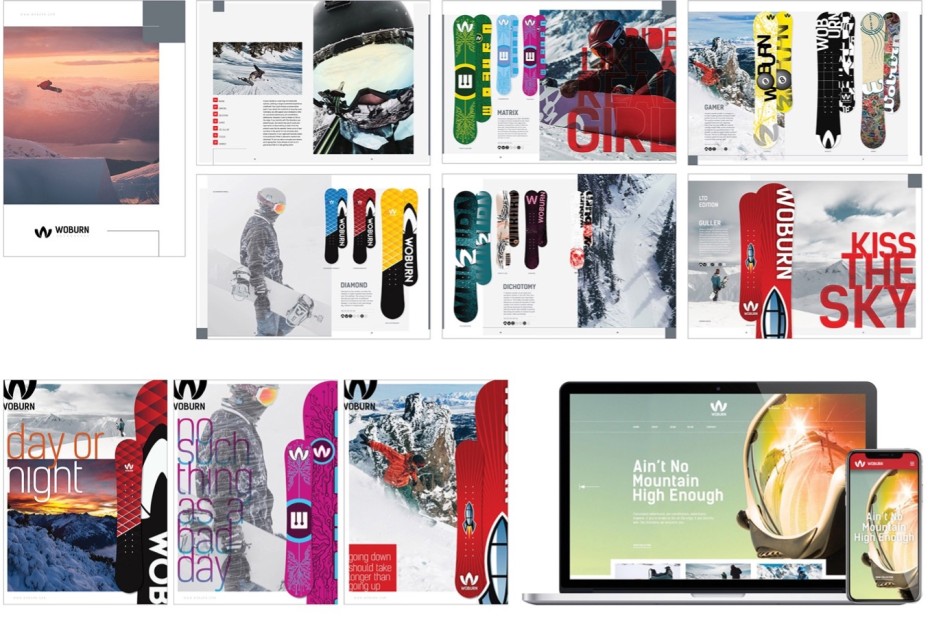 Those words can be found on the home page of the website dedicated to David King, created by Rick Poynor and designer Simon Esterson, who also designed the book. The site continues to build on the contents of the book, seamlessly reprising Esterson’s design, and enriched by a growing archive of blogs by Poynor (sixteen to date) that examine various aspects of King’s life and work more deeply. 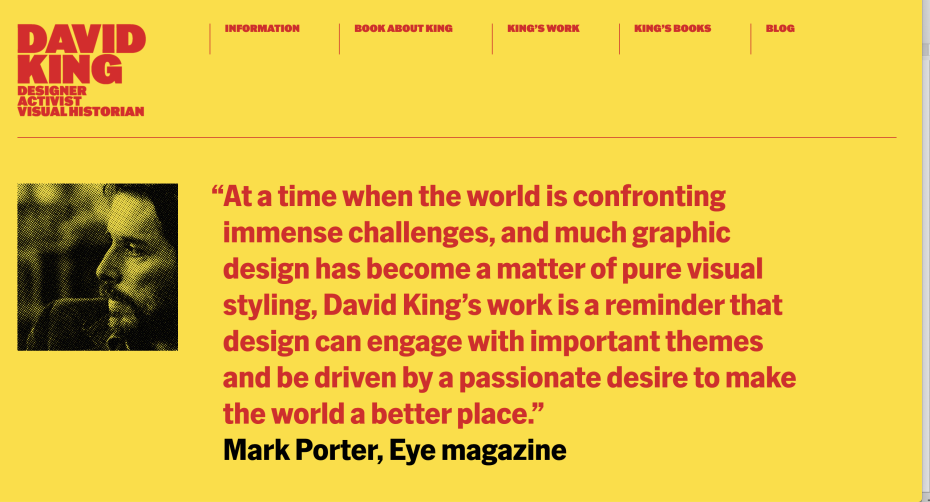 This work is just the latest in Poynor’s long list of accomplishments. I had the pleasure of writing for him when he was editor of Eye Magazine, back in the early nineties. His mission then, as now, was to build a critical discourse about graphic design. Eye was one of the few magazines in the world to embrace criticality, in stark contrast with most design magazines of the time which tended to focus on the superficialities of style, craft and celebrity without considering the broader socioeconomic context in which design operates.

As one commentator insightfully reminds us, although Rick Poynor was never a practicing graphic designer, his depth, reach and dedication have made him as visible and vocal as any design practitioner of the last 40 years. May his voice continue to inform and enrich the discourse he has worked so hard to build.