As a long-time writer, designer and brand strategist operating in a trade which, like many consulting practices, is often hobbled by a glaring gap between the recommendations it makes to clients and the client’s lack of will to execute them, I think I can count on one hand the number of companies which actually live their values.

Even as a corporate executive in charge of defining and executing against my own strategy, as I once was as VP Brand at an ill-fated Canadian mobile provider a decade ago, I hung my head in shame as my hopelessly idealistic brand promise was broken by the impatience of investors who forced us to launch the operation well before it was ready. For a brand that was built on a promise of putting the customer experience at the heart of its offer, going to market with a half-built network made us into unmitigated liars. It was the worst day of my career.

But that is a tale for another time. Today I was thrilled to find a company that actually—fiercely, even—lives up to its stated values. It is not a large company, which probably helps, but it is a shining example of how to do it right. It’s called Animikii.

Indigenous-owned and operated, Animikii is headquartered on traditional Lekwungen territory in what is now known as Victoria, BC. Founded by Manitoba-born Jeff Ward, a man of Ojibway and Metis heritage whose indigenous name means ‘thunderbird boy’ and whose team members call themselves ‘thunderbirds’, Animikii offers design, digital communications, custom software development and branding primarily to Indigenous clients. It works with leading Indigenous-focused organizations from all industries, “to drive positive change for Indigenous Peoples through technology.”

While Animikii’s extensive work over the last 18 years deserves more attention than this column can give it—a task I hope to undertake elsewhere in far more detail—I would like to focus here on both the nature of its values and how it lives them. 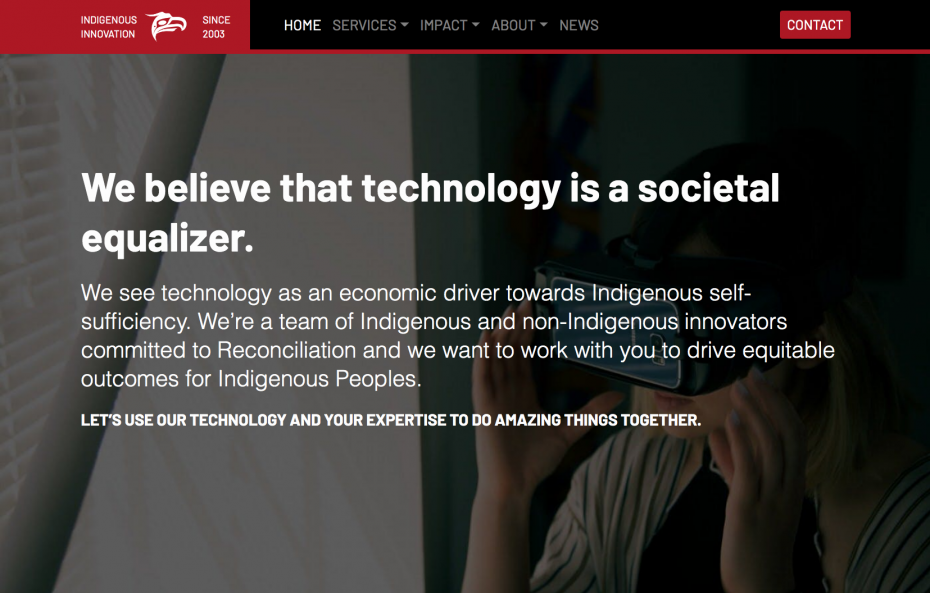 First of all, Animikii is a registered B-Corp, which, for those who may still be unfamiliar with the designation, means that it is not only committed but compelled to balance profit and purpose by meeting the highest standards of verified social and environmental performance, public transparency and legal accountability. That means it must live up to its values or lose its B-Corp status.

As you might imagine, there aren’t a lot of B-Corps on Wall Street. At a time when people everywhere are able to see through hollow corporate promises, many of the world’s biggest brand names continue to make them as they desperately scramble to sound like they are socially and environmentally conscious. Anyone who has watched the documentary The New Corporation knows that this is yet another example of high level, high stakes bullshit.

Frame from the website Animikii created for the 2017 film Indian Horse, based on the novel by the late Richard Wagamese

So what are the values professed by Animikii? They are based on what is known as the 7 Sacred Teachings. Jeff Ward enumerates them in a TED Talk: love, respect, courage, honesty, wisdom, humility, and truth. Now, you have probably seen some or all of these words in more than one corporate branding deck. They are so over-used that any meaning has been beaten out of them.

But Animikii takes them a few steps further. First they define what each means to them. Then, in fulfillment of their claim to B-Corp status, they report annually on what real actions they have undertaken to live up to them. And they are many.

Again, you may ask, what’s the difference between that and a typical corporate CSR report? In most corporate cultures, CSR is seen as a department, separate from the core business operation. It is seen as an obligatory gesture whose sole purpose is to protect a company’s reputation. But few investors would consider it a prerequisite of profitmaking, which is really the only outcome they are interested in. As Robert Reich says in The New Corporation, “There’s no such thing as corporate social responsibility.”

But here’s the difference at Animikii: it actually sees it as core to daily operations, and a prerequisite for day-to-day decision-making on everything from hiring to new business. They won’t take on a project if it goes against their values. They diligently track the benevolent actions of both the company and the individuals who work there. They hold their own feet to the fire.

This is what it means to live your values, not just articulate them. The world needs more Animikii. /wn