A Salute to Burton Kramer, Canada's Pioneer of Modernism.

Burton Kramer is a pioneer of Modernism in Canadian Graphic Design. 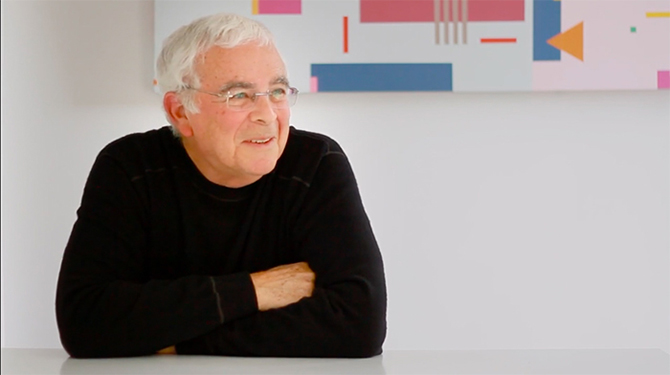 He is best known for his iconic design of the Canadian Broadcasting Corporation logo and corporate identity program in 1974 and his work for Expo ’67.

From 1967-2001, he was President & Creative Director of Toronto-based Kramer Design Associates Ltd. His time there encompassed design work for packaging, exhibitions, books, brochures, logos, Canadian stamps, record covers, posters, business forms. He did a two-year stint a President of the Society of Graphic Designers of Canada 1975-77, is an Academician of the RCA 1974-present, was one of the first Canadian members of AGI (Alliance Graphique Internationale) in 1974,  and served on the Canada Post Design Advisory Committee from 1982 to 1985.

For 21 years, Burton Kramer trained a new generation of Canadian Designers through teaching Advanced Corporate and Graphic Design, and Typograph, at OCAD.

His work has been exhibited in Canada, Switzerland, Tokyo, Czechoslavakia, Belgium, France, Italy, Mexico and the U.S., and is included in the collections of the Smithsonian Museum and the Library of Congress poster collection.

Archives of his work are in the permanent collections of the Royal Ontario Museum, Toronto and The Rochester Institute of Technology Vignelli Centre.  Recently, his design work has been featured in a number of important books and publications, including “Logo Modernism, Jens Muller, Taschen 2015; “Directions” 2015, Advertising and Design Club Canada; “First Choice”, Ken Cato, Images Publishing 2016; “The Moderns’, Heller & D’Onofrio, Abrams Books, 2017; “Neshan 42, Winter 2018“; “The History of Graphic Design / Vol. 2, Jens Muller, Taschen 2018.

According to Italy's Design Culture, Kramer's career encompasses a "clear, consistent, and dynamic communication through the use of rigorous geometry, meaningful expressiveness, and colourful energy."

Retired from graphic design since 2001, he has dedicated himself to his abstract painting. Kramer Design Associates is now run by his son, Jeremy.