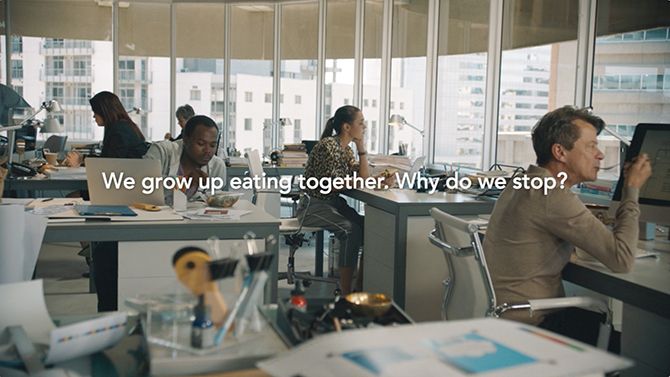 Here at Applied Arts, we’re all about promoting and showing off our junior winners! And with our Advertising Annual set to drop in early-December, we thought it would be a great time to highlight the Young Blood winners from our 2018 Advertising Awards.

Young Bloods are a series of categories open to entrants who have been out of school for five years or less. All YB’s are judged on creative excellence, technical merit and suitability for end use. However, our judges also take into account their level of professional experience.

The YB’s from our Advertising Awards covered a variety of topics within their pieces – nothing was off the table. Everything from love, acceptance, quality time, honouring and even mourning loved ones were covered. For our 2018 Advertising YB's we had three different winning creative teams.

Now without further adieu, let’s take a look at the winning pieces!

Tina’s design for Volkswagen Pride was picked up by VW Global. 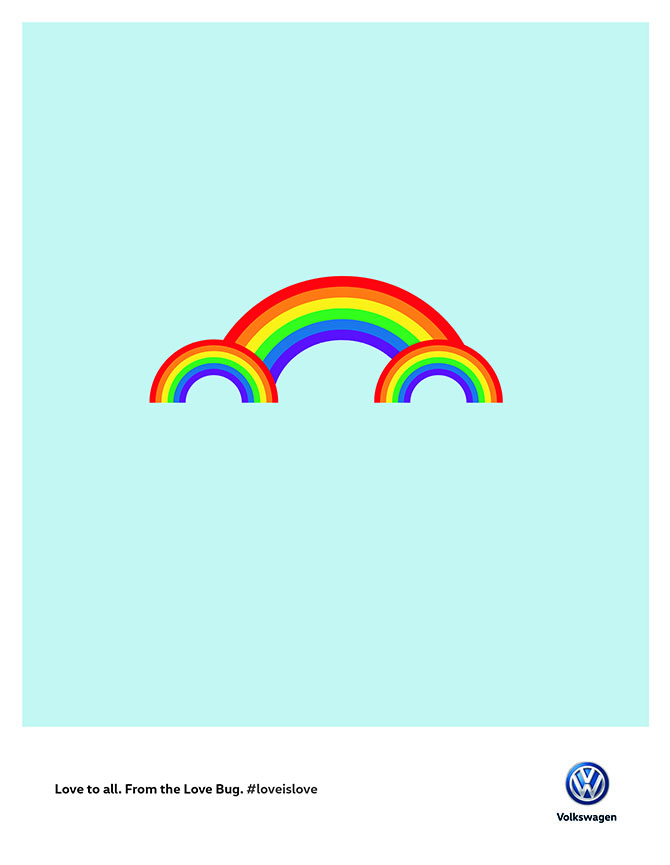 “This was my first project which was both fun and scary. We spent a lot of time on various rainbow designs. I think I did something like 24 different versions.” – Tina Peng

“It’s super simple and super iconic. Which is often the hardest thing to do. The team really got into the details of the design.” – Allan Topol, CD at DDB Canada.

To help combat the rates of people feeling more disconnected than ever before, PC is inviting us to eat together. This short film was viewed over 60 million times online – despite being only airing on TV three times!

“The scariest brief in the world is when the thing that came before it was awesome, and the brief is basically: make it even more awesomer. That’s what happened with Eat Together. But they found a really fresh insight- why do we eat alone so much at the office? – and turned it into this beautiful and almost haunting piece about loneliness in the workplace.” – Angus Tucker, CCO at john st.

"The entries that caught my attention were the one that had an actual advertising idea (as opposed to a tech gimmick), something pure, executed with superior art direction, writing, and overall craft. PC's #EatTogether is a good example of this." - Martin Belanger 2018 Advertising Awards Jude

Staying true to its client’s views, this radio campaign was created with the most cost efficient option – a free online text to voice reader. This allows for No Frills to keep their groceries at the lowest possible cost, instead of spending money on expensive commercials. This Young Blood team wrote the ads, recorded them using the text to voice reader and then shipped them directly. Listen to them here. 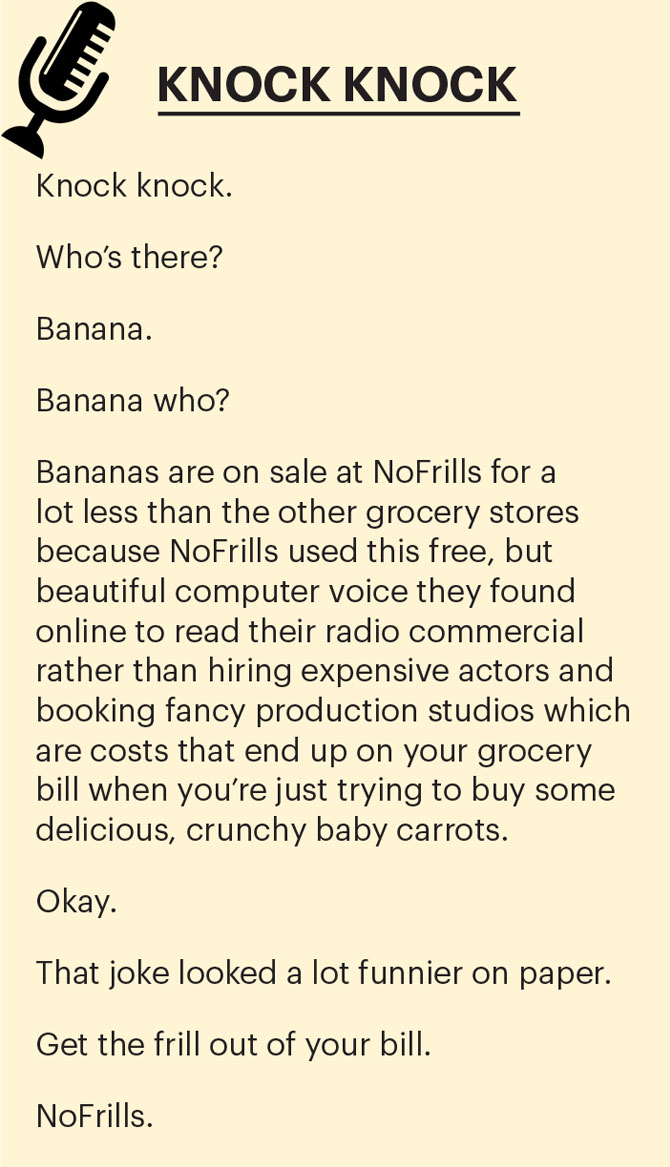 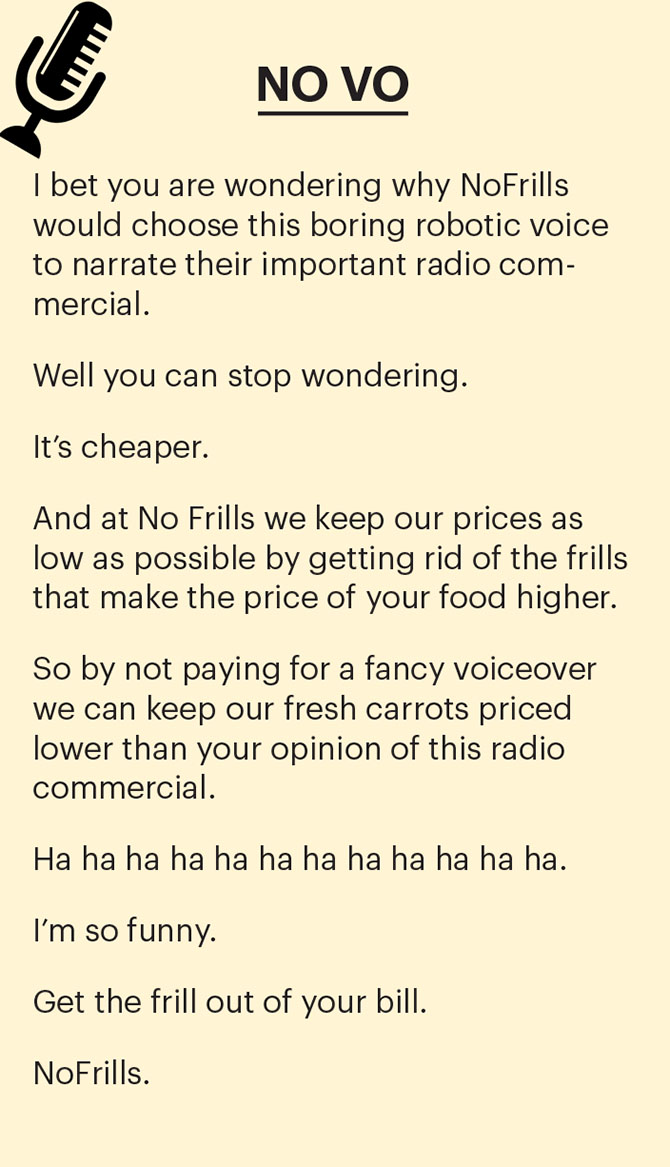 “As with so many great ideas, there was no brief for this project. It was just a young team who took it upon themselves to write a bunch of radio ads for our clients as a way of getting better at writing radio. (Young creatives, take note). This campaign came out of that. Simple, smart and so No Frills. Our client loved it from the get go – of course, the fact that it was called the “Cheapest Radio Campaign Ever didn’t hurt.” -Angus Tucker, CCO at john st.

To mark the National Day of Mourning, a day to remember workers who were killed, injured or suffered illness on the job, this YB team draped an empty Toronto streetcar in all black and sent it down the tracks during rush hour – to honour those workers who never made the commute home. Oskars and Cory worked with the Workplace Safety and Insurance Board (WSIB) for this campaign. 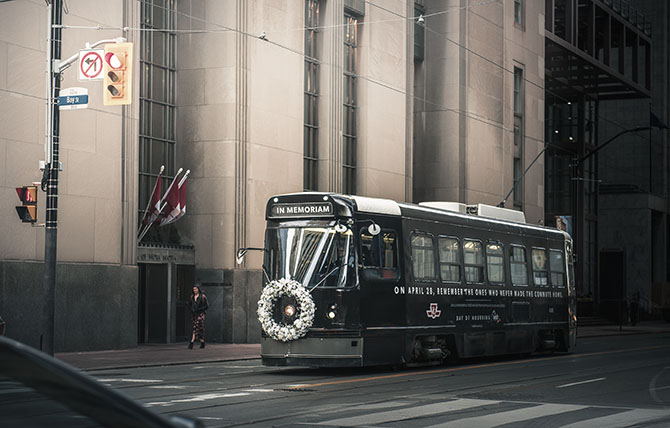 “Right from the get-go it felt like it was a fresh way to memorilazing someone. We felt that it was a really powerful way to memrialize those who died in the workplace since they didn’t make the commute home that they were supposed to.” Oskars Trinitis and Cory Hansen. 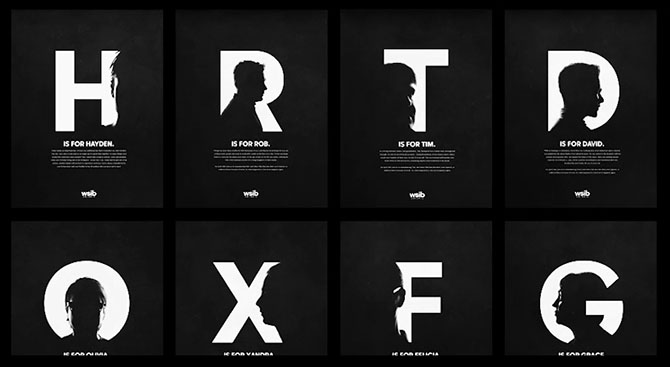 “This was a massive undertaking that honoured deceased people in a truly unique and artistic way. We personally have never created a functional typeface before- let alone use it as a storytelling device.” - Oskars Trinitis and Cory Hansen.

The rest of our 2018 Advertising Awards winner will be published in our winter annual, dropping mid-December. Stay tuned!