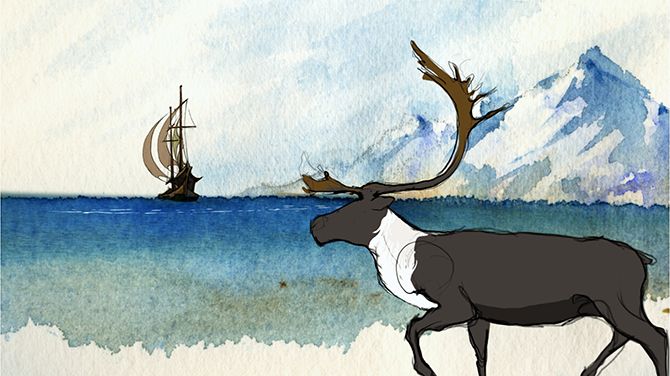 “It’s easy to feel isolated,” Iqaluit illustrator Jonathan Wright tells me over a somewhat crackly phone line. As the crow flies, he’s about 2,300 kilometres (1,429 miles) away from my office in Toronto.

Wright is living and working in Nunavut, both the largest in area and the least populous of the Canadian provinces and territories — we’re talking just over 31,000 people living in a region that amounts to 20 per cent of the country. With Iqaluit’s remote location at latitude 64° north on the eastern coast of Baffin Island, something as commonplace as an Internet connection may be at best spotty, at worst nonexistent.

For a freelance illustrator and motion artist who relies on uploading files for clients, this is particularly challenging.

“If the wind is too high, we get cut out. If it’s cloudy, we don’t have access. Watching videos for fun is nearly impossible. A lot of my illustration is based on the first page of Google results,” Wright says. “Another challenge is just being in contact with clients face-to-face.”

It’s a small price to pay to live in Canada’s true north, where the tundra stretches infinitely in one direction, the icy waters of Frobisher Bay flood the horizon in the other, and the stars seem to fight for room in the night sky. To call it an inspirational place for an artist would be an understatement. “I love it up here,” Wright says. “Everything is a much slower pace here. It’s very calming and soothing. I don’t know if that comes across in my drawings, but I try not to be too frenetic.” 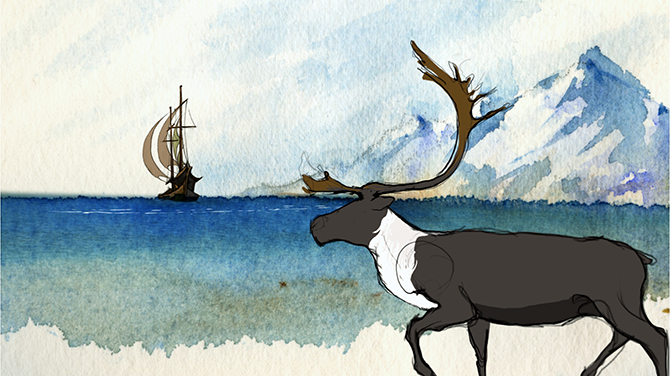 The Bear Facts © 2010 The National Film Board of Canada. All rights reserved

His work absolutely reflects that mentality. His style is immediately evident — hazy edges, muted colours, sparse landscapes, shadows. “A lot of people describe my illustration style as wispy,” he acknowledges. It’s not surprising for someone who had a keen interest in watercolours before he switched to digital-based illustration.

Above all, Wright focuses most of his attention on conveying the little details. “I love the emotion of characters, so I try to get that across more than anything. Facial expression is so important.”

He easily captures the personas of famous figures — see his caricature-like illustrations of Rob Ford and Stephen Harper. He also lends an anthropomorphic quality to the expressions of animals, from a moose thoughtfully chewing on rice to a frightened fish skewered by a fisherman’s ice auger. The tiny faces in “Boat People,” Wright’s drawing of a family arriving to Grise Fiord, are so lifelike they look like photographs. 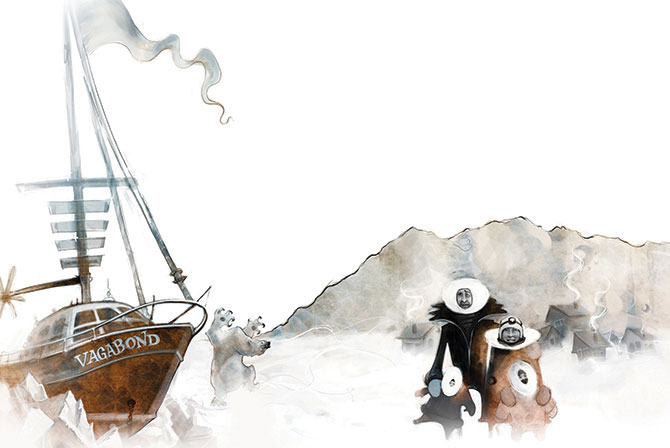 “It really bugs me when I see these gorgeous drawings, but the main character is just staring blankly at the viewer,” he says.

When looking for inspiration for his characters, Wright turns to the power of Google. “Google Images is paramount to my workflow,” he laughs. “Before I do sketches, I am scouring the Internet for keywords and key images to put me along the right path.”

Other times, he gets visual cues from those around him. “People are really nice up here, so it’s easy to make their characteristics shine through.”

Of the 10 years he’s lived in Iqaluit, Wright has been regularly drawing for only four or five of them — he started illustrating full-time a year ago. Asked about being a kid in Toronto, he says, “I was a really horrible student.” His mother saw he had talent and enrolled him in art school, but he had other plans. “I hated it. I didn’t draw for years after that. I guess it scarred me!”

He first studied engineering and architecture at Queens University and University of Waterloo before becoming an apprentice cabinetmaker. But in 2001, he was in an accident with a tow truck, which gave him lasting back problems. “I had to figure out something else,” he says. 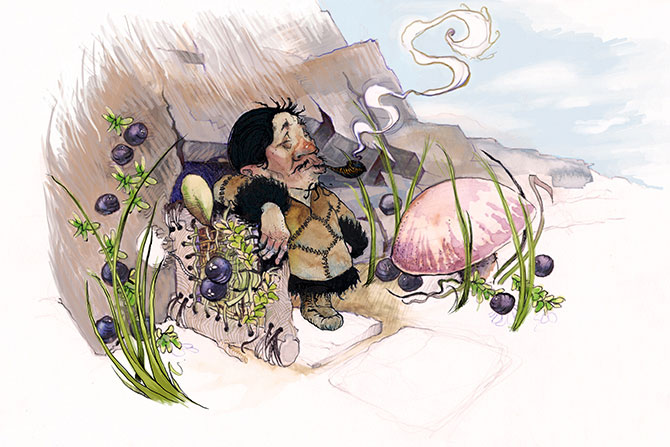 So he enrolled in Sheridan College’s illustration program and, in 2005, followed Alethea Arnaquq-Baril, his writer-director wife, to her home of Iqaluit. He worked as a carpenter before transitioning to freelance illustration, which he now practices out of a converted shipping container. “I can just pick up my container and move it!” he says of his unconventional, mobile workplace. He sourced a local container for a low price, installed heating and now uses it as his drawing studio and wood shop (he calls it his “studiop”).

He’s also the in-house illustrator and animator for Inhabit Media, a Nunavut-based publishing company that prints books about Arctic life, and its animation division Taqqut Productions. Before landing the permanent gig, Wright completed the illustration work for Inhabit’s Ava and the Little Folk, a children’s storybook about an orphan who encounters a group of magical dwarves.

Wright’s passion for making characters come to life on the page translates well to animation — he is the lead character designer for Qalupalik, an Oculus Rift horror/survival game currently in development by technology studio Pinnguaq. “Animation is a massive undertaking,” he says. “You can’t move ahead until you’ve completed the previous step.” 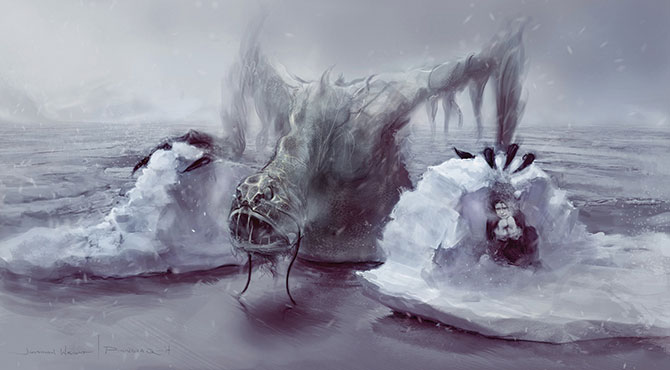 One of Wright’s earliest motion projects, The Bear Facts, combined watercolour and sketching. He and several other artists who participated in the National Film Board of Canada’s Nunavut Animation Lab workshop in 2008 were chosen to create their own short films. Wright’s clip chronicles an Inuit hunter’s amusing encounter with a European explorer, who, after rushing to settle on the land with his Western-style homes, learns he may not be cut out for Arctic life after all.

“[The film] was based on my experience as a carpenter, and on coming up north for the first time,” he says. “It was just really funny to see these southern houses supplanted in the North. I toyed with the whole idea of taking everything you know, and, without modifying it, putting it into this new place.”

Commenting on Northern stereotypes is a theme that runs through Wright’s still and motion work. In 2011, he animated the Bravo!FACT film Sloth, which his wife wrote and directed. Part of the network’s “Seven Sins” series, the short challenges a common stereotype about Inuit work ethic. “We got to poke fun at a lot of people’s preconceptions of life up here,” he says.

Life up there, for Wright, is perpetually changing. Currently, he is illustrating 10 books, animating a commission, working on Qalupalik, and has no less than five character designs underway. He has plans to produce stop-motion work for Inhabit Media, and still tries to make time for woodworking on the side. “I love the hell out of my shop,” he says. “I want to find a way to bridge my loves of woodworking and illustration, so maybe painting the raised panels on the cabinets I make with funny scenes.”

It’s a busy schedule that further shatters any prejudices about the pace of Northern life — and one that Wright plans to keep up. “A lot of people don’t work enough, so they don’t charge enough. It’s a huge mistake for the illustrator and for illustration as a whole,” he says. “Every artist has to really value their work.”

Split Run is a feature that uses the power of both print and the Internet. Featuring an original image-maker who does both stills and motion work, the portfolio appears in Applied Arts magazine and online.

We're making most of our print content available online, free of charge, for your enjoyment through the end of the year. In 2015, this content will be available to subscribers only.