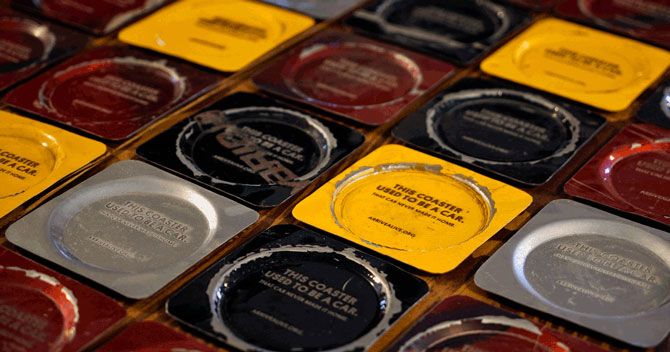 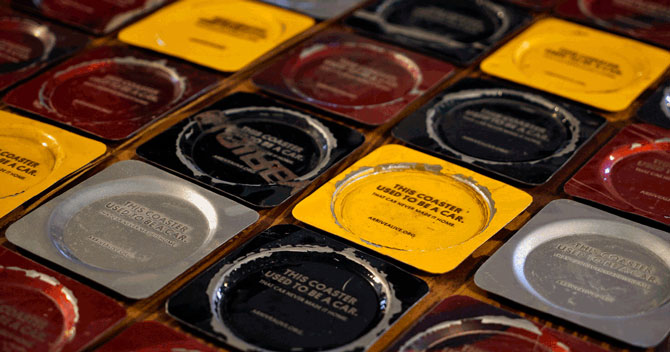 Ontario sober-driving charity Arrive Alive is bringing its Applied Arts Award–winning “Wrecked Car Coasters” back for a second year in order to educate drivers on the dangers of impaired driving on one of the year’s biggest party weekends.

One hundred coasters pressed from the metal of crashed cars will be distributed to patrons at Pipes and Taps Pub in Oakville, Ontario on Saturday, September 17, emblazoned with the tagline, “This coaster used to be a car. That car never made it home.”

“St. Patrick’s Day is one of the biggest drinking nights of the year, and it’s simple to plan ahead and get home safe by taking transit or a cab,” says Michael Stewart, program director of Arrive Alive. “It only takes less than a minute to plan ahead.”

Arrive Alive worked with Rethink last year on the concept. The agency is helping with media outreach again. Stewart says that bringing the campaign back was a no-brainer after it went viral last year. 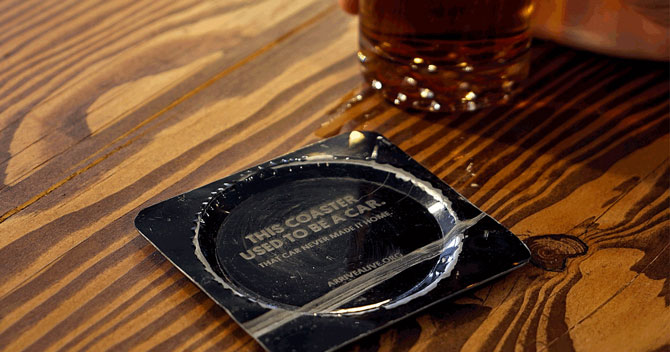 “People would comment on news stories to say that they lost a loved one to impaired driving, and they would thank us for raising awareness. That really helps it resonate with other people,” he notes.

Production-wise, Stewart says that it was a challenge to source sturdy enough parts of the vehicle that could be pressed down into the coasters. “The mechanic had to go through a lot of work to get down to the layer of metal used for the laser etching.”

This year, Stewart says Arrive Alive is bringing extra attention to its Operation Lookout program, which enables people to call 911 to report a crime in progress if they suspect someone is impaired driving or about to drive impaired.