Online games can expose your kids to more than you think.

Children of the Street and Will demonstrate the dangers of cute games.

In an era where going outside and playing with your friends isn’t always an option for kids, gaming has filled a gap for play and connectivity. However, there are more dangers than just the final stage boss lurking in polygonal places.

The connectivity of games, which allows kids to stay connected to friends, is also what opens them up to strangers who want to exploit them. In this new provocative campaign, Children of the Street and Will want to demonstrate that adorable can quickly become horrible.

“We wanted the advertising to parallel the subversive bait and switch tactic used in gaming platforms by sexual predators. These gaming characters seem cute, friendly and harmless on the surface but there is something sinister lurking beneath that isn’t immediately apparent,” said Lisa Lebedovich, Creative Director at Will. 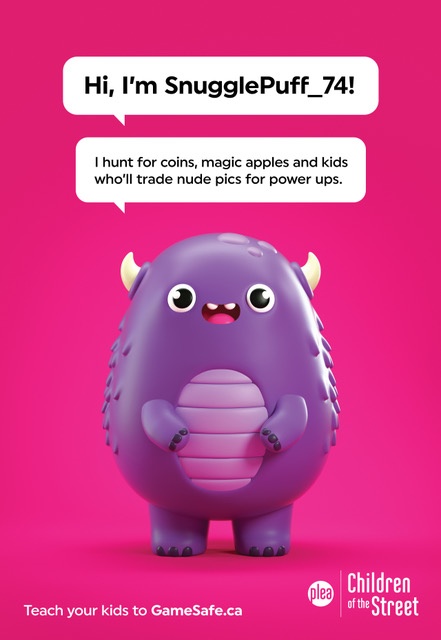 “Stranger danger” has extended to education around Internet safety, but games have been something of a blind spot. As a parent if your last connection to gaming was a coin-eating arcade machine, a dusty cartridge or even a jewel-bursting puzzler on your phone you may not be aware of the in-game chat features in most modern games.

“It’s surprisingly easy for people with ill-intentions to hide behind cute avatars and fake profiles to gain the trust and friendship of kids through online gaming platforms. This is often how the grooming process begins,” said Jen Graham, who oversees communications for Children of the Street. 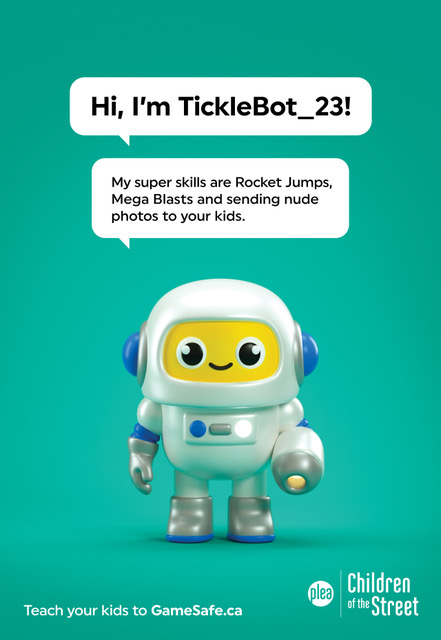 Exploiters bond with kids in-game as teammates working towards gaming goals, and subsequently shower kids with gifts, via in-game currency, admin codes or gaming gift codes, in a form of “love bombing” that builds a sense of debt in the targeted child. They are then enticed to move to other messaging apps or in-person meet-ups as the exploitation ramps up. Being able to identify the early signs of exploitation and see the bait before the switch is at the heart of this eight-week campaign, which runs in Greater Vancouver and directs parents to the gamesafe.ca landing page filled with tips and support materials to help kids game safely.

ABOUT CHILDREN OF THE STREET

PLEA’s Children of the Street program is a provincial leader in the fight to keep children and youth safe from sexual exploitation.  The program offers children, youth and adults the information and tools they need to keep young people safe from all forms of sexual exploitation.  Its initiatives engage a diverse range of individuals and groups throughout the province and, with over 500 workshops in approximately 30 BC communities, reach more than 25,000 participants annually. For more information, visit www.childrenofthestreet.com.