Color, by the Book

Until very recently, I have had in my personal library three books about color.

One is Johannes Itten’s classic text, The Elements of Color. First published in German in 1961 under the original title Kunst der Farbe (the Art of Color), I always wondered why the English edition translated the word ‘kunst’ (art) into ‘elements’. It’s not an altogether bad decision since the text and its accompanying illustrations provide a very thorough analysis of the phenomenon of color, which means it breaks the subject down into its constituent parts. But the reason for its original title is that Itten’s treatise relies almost entirely on examples from the history of painting, whereas the other books depicted above address the subject with a broader set of cultural references.

Then there is the book simply entitled COLOR, published by the Architectural Digest in 1980 – and that’s when it fell into my hands. It is a coffee table-sized tome, a sprawling, not very well-organized treatment of its subject, almost like a rambling encyclopedia whose pages you’ve torn out, thrown into the air, and then reassembled in random order. And like an encyclopedia, you don’t read this from cover to cover.

On to number three, The Secret Lives of Colour, by British journalist and historian Kassia St Clair. When not writing about color, she writes on design and culture for The Economist, House & Garden, Quartz and New Statesman. (I wanna be Kassia St. Clair when I grow up). She approaches her subject with the historian’s eye for narrative detail. But while her academic creds are visible on every page, there is nothing turgid about her prose. It is an absorbing, informative and enriching read. This is the only book about color in my collection that is entirely bereft of imagery. The richness of the narrative more than makes up for it. 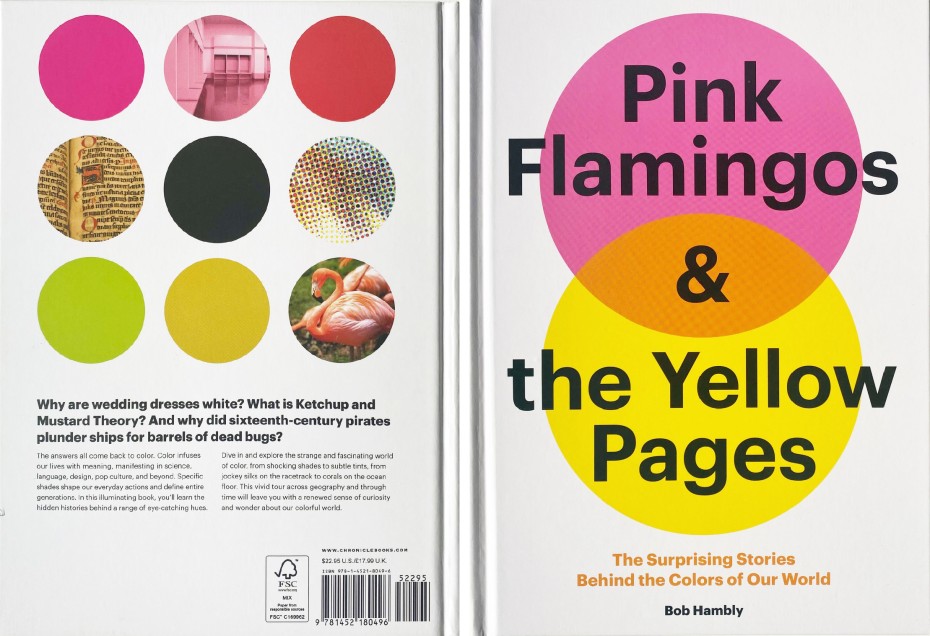 And now to my latest acquisition: Pink Flamingos & the Yellow Pages, by Toronto-based designer Bob Hambly. The blurb on the back cover (above) gives you a taste for what kind of book this is. By far the breeziest text of all four, its accessibility is a big part of its charm. As easygoing as its author, whom I have had the pleasure of knowing since the early ‘80s, Bob’s book is another example of a text that you don’t necessarily read cover to cover but that you delightfully snack on. Or gorge on, depending on your appetite.

The stories are as interesting as those of St Clair’s but nowhere near as detailed, and being a designer, Bob relies on imagery to enhance the narrative. His approach to the subject is far more folkloric and entertaining. I especially enjoyed the ‘colorful’ language. For instance there is a page entitled ‘crayon names’, in which the author shares monikers like Alien Armpit (pea green), Booger Buster (pale green), Wash the Dog (yellow), and Ogre Odor (orange), apparently names that were actually used. Another page of ‘groovy car colors’ from the sixties includes names like Anti-establishment Mint, Freudian Gilt and Thanks Vermillion. And if you ever wondered about how and why paint colors are named the way they are, this book will tell you.

Above: a visual snippet from the story of cochineal, or carmine red. This visual scheme is repeated throughout the book with different colors and images to accompany the text.

The content of the book is selected from the author’s website, colorstudies.com, which is well worth a visit. As with the website, Hambly’s book delivers its narrative payload with a refreshing economy of form and just the right amount of content. And like the first bite of a great meal, it inspires a taste for more. Take for instance the story of cochineal, or what we now call carmine red. It was originally sourced from the tiny white insects that could be found feasting on cactus plants in central America. It was as good as gold back in the 16th and 17th centuries, brought back to Europe by the boatload and used as a natural insect dye. Reading Hambly’s brief but informative account inspired me to read Kassia St. Clair’s more detailed rendering of the origin story, and then to go back to COLOR, the coffee table book mentioned above, for its take on the many different uses found for this color, from British military uniforms to Sarah Bernhardt’s lipstick and rouge.

As anyone who has made a study of it knows, color is a subject of enough complexity and richness to last a lifetime. Bob Hambly’s book and website are open-ended enough to allow us to indulge our color palate’s curiosity and to inspire an appetite for more.