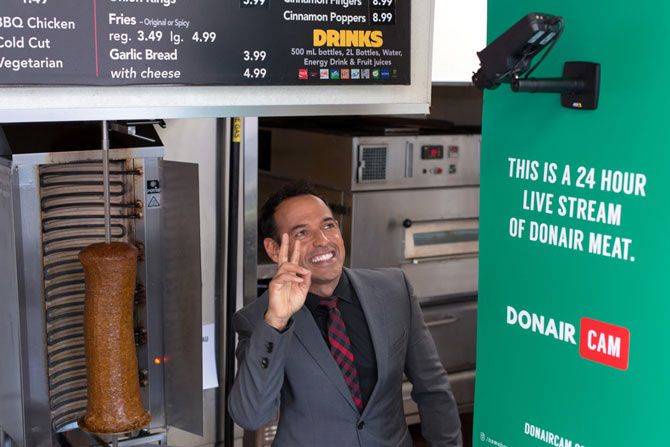 A simple way to boost a brand is to show the effectiveness of its product in action. Or, you can go viral, of course.

Nova Scotia Webcams recently managed to do both. The company maintains more than 75 cameras around the province, most of which film nature and scenery.

But after a decade in business, Nova Scotia Webcams needed a boost. So last fall, they worked with creative agency Wunder to create a webcam that was most definitely outside of its usual fare. The 24/7 “Donair Cam” consisted of a camera trained on a rotating hunk of meat in one of Halifax’s many donair shops.

“We realized that beautiful scenery and landscapes can only attract so many viewers,” notes the company in its online case study of the project. “So how could we make a webcam that everyone wanted to watch? After some digging, we noticed there was a common trend with previous viral live streams—they were all pretty weird.”

Turns out, meat cooking slowly on a spit is just weird enough. Within its first week online, the Donair Cam went viral in 159 countries, snagging more than 47 million impressions around the world and launching media reports from BuzzFeed, Yahoo, VICE, CBC, CTV and ABC, among others.

Check out the campaign below.

Donair Cam from Wunder on Vimeo