Design on the Way to Work

With a talent for snatching beauty from the jaws of decay, this young shooter reminds us that entropy always has the last laugh

Instagram turns some people into collectors, some into curators, some into voyeurs. It turns other people into diarists and yet others into encyclopaedists. Or maybe that’s the way these people always were but never had a platform like Instagram through which to reveal their true identity.

Most Instagram accounts tend to lack any visual structure and are just collections of visual bric-a-brac, rather like high school yearbooks or that box of family photos that is stuffed to the brim with thousands of prints that will never know what it’s like to be framed and admired.

But then there is the occasional treasure. One such can be found in an Instagram account named @dr.Hathaway. The ‘doctor’ in this case is Oliver Hathaway, a young fellow obsessed with the visual details of his daily perambulations throughout the downtown core of Toronto.

The first thing you notice is that this person has an eye for graphic pattern. He has a particular talent for extracting the most interesting visual detail from the most mundane visual moments, as if plucking gems out of a dumpster. The second thing you notice are the repetitive, quotidian themes: car tail lights and headlamps, basketball hoops, the backs of people’s heads, anything with duct tape, fragments of signage and branding, hands, all manner of patchwork, empty sign frames and the serendipitous sculpture created by random juxtapositions of industrial detritus. 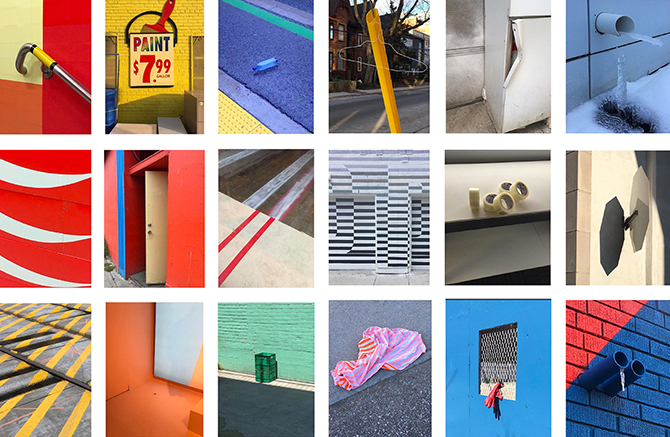 The patterns occur again and again, revealing a kind of encyclopaedic documentation of the chaotic underbelly of the urban landscape. There is a melancholic humour about these images - a reminder that entropy always has the last laugh. It’s a view into the diurnal routines of a person who walks to work and back every day with his eyes wide open for graphic opportunity in the midst of urban decay. And boy does he find it.

Despite the prosaic nature of his subject matter, Hathaway can find delight in the corner of a window or the fragment of an advertisement or the reflection in a puddle. While individual images are completely decontextualized, the knowledge that they were mostly taken within the radius of the downtown core gives them all a common context, and when they are seen together a kind of urban visual vocabulary emerges, encyclopaedic and diaristic at the same time.

Oliver Hathaway does not work as a professional photographer or designer, which makes this beautiful obsession even more interesting. One hopes he will continue this daily routine long enough to curate these images as a collection of unique visual narratives. That’s a book I would love to have and/or a show I’d love to see.