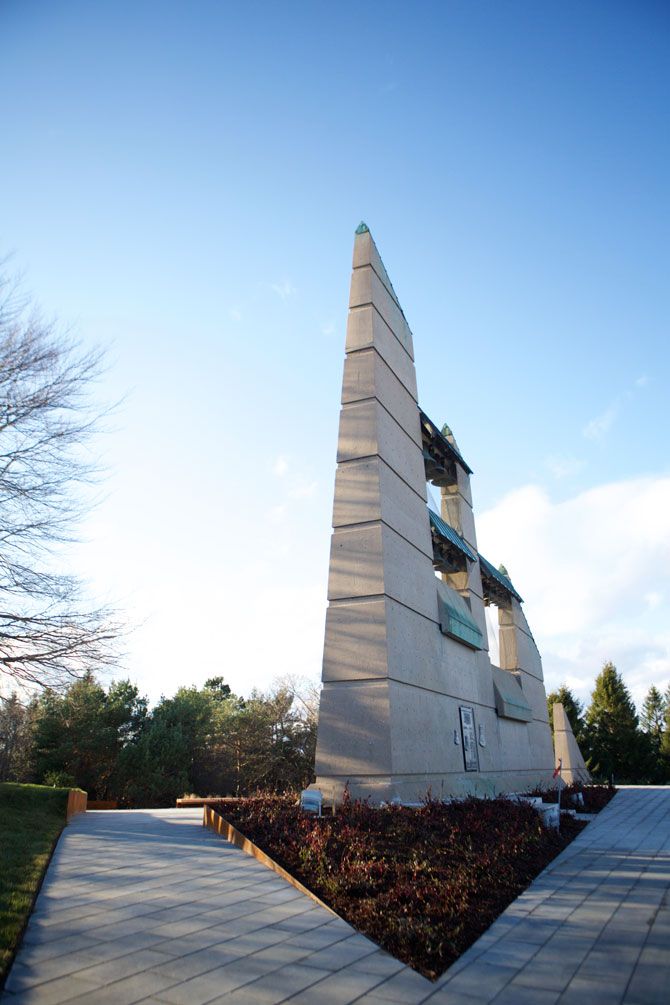 Ekistics Planning & Design and Form:Media come together to tell a tragic story through landscape and design

For the 100th anniversary of the Halifax Explosion, the Halifax Regional Municipality commissioned Ekistics Planning & Design and Form:Media for a permanent commemorative project at Fort Needham Memorial Park, the city’s green space dedicated to the explosion victims. Together, Ekistics and Form:Media created a landscape architecture project with experiential design elements atop Fort Needham’s hill.

The project saw improvements made to the park, including access to the hill with gently-inclining paths and a staircase from Richmond Street to the Memorial Bell Tower, which was built in the 1980s. The staircase includes commemorative features such as poles made of rusting steel, engraved with the names of lost local businesses and churches. There is also a memorial plaza in the park, lit up at night with different colours.

Avoiding traditional didactic panels, the project instead highlights the sheer physicality of the explosion. There are two retaining walls facing one another, built to match the length of the ships. Benches carry engravings of their dangerous, chemical cargo, such as wet picric acid.

Inspired by the image of the explosion’s aftermath, Ekistics and Form:Media created elements made of steel to represent the vertical pieces of ship masts and buildings that stayed intact after the blast. “This project is about two metal-hull ships that collided and dispersed for kilometres after the explosion, like splinters throughout the city,” says John deWolf, vice-president of Form:Media. “[Using] steel as a reference to those buildings, and specifically those two ships, was very important.” 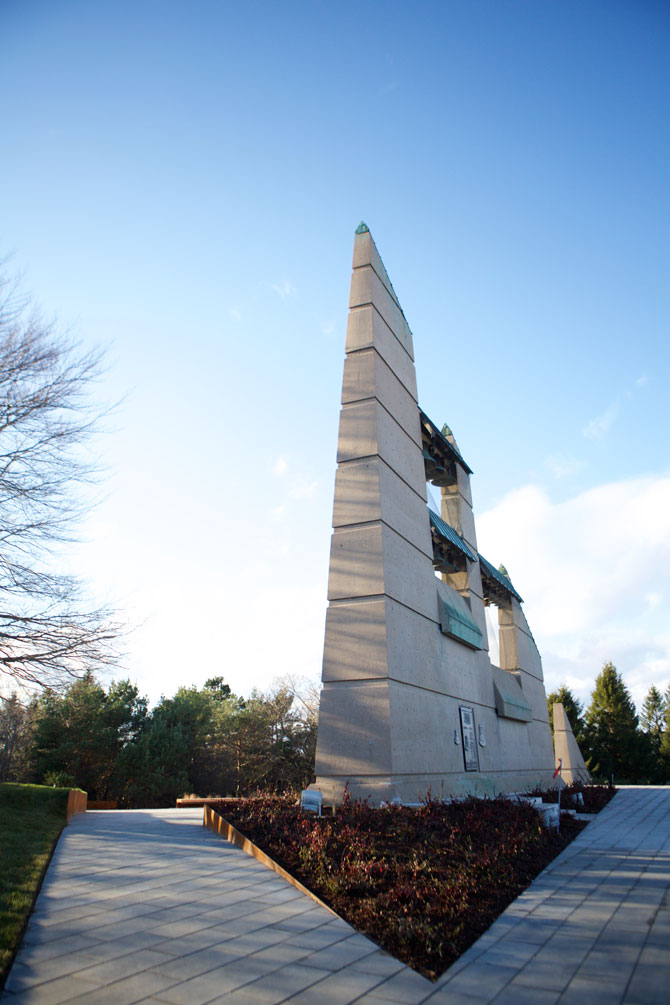 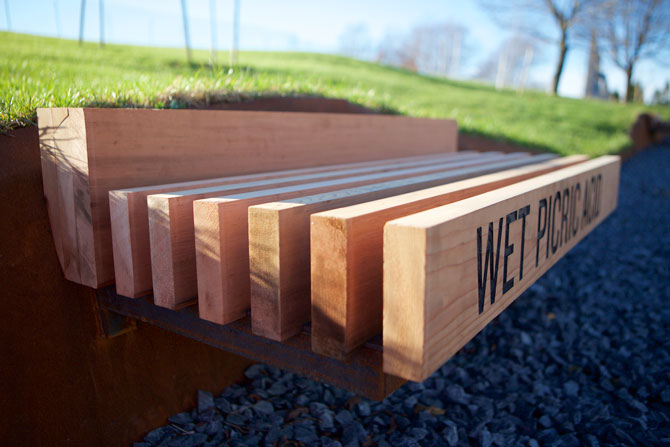 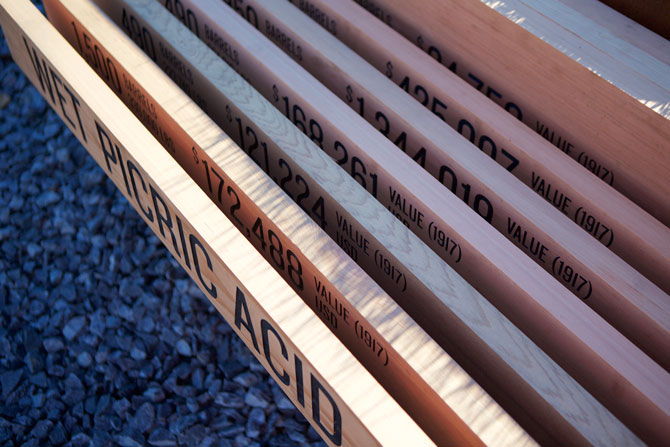 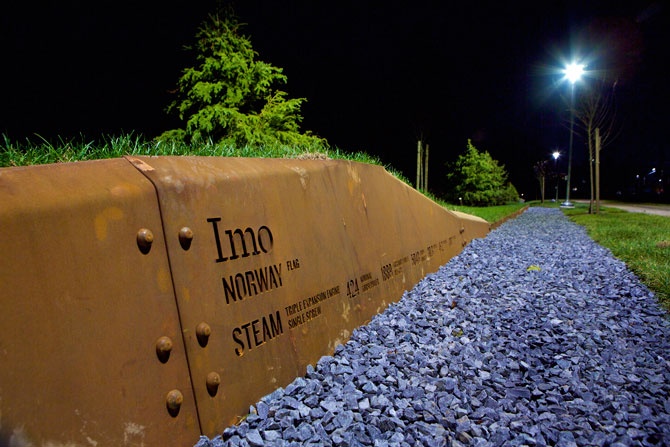 The team used CorTen steel throughout. They also used rusting steel to symbolize how the ships were stripped clean of paint during the explosion. Even the typographic elements are made of half-inch steel plate with text blown out of them.

“Many elements have a technical function in the park,” says Sandra Cooke, senior landscape architect at Ekistics. “But we use those elements as way to tell the story.”

On the steepest slope of the hill is the Richmond staircase. Standing at the bottom, you can see the word “Richmond,” each letter written on the ascending cement steps. As you walk up the stairs, the word disintegrates. Cooke explains, “It signifies the neighbourhood of Richmond, which was destroyed in the explosion, never returning again in name.” 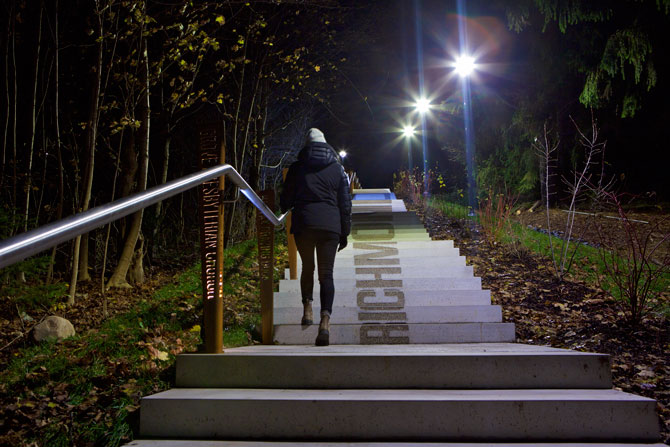 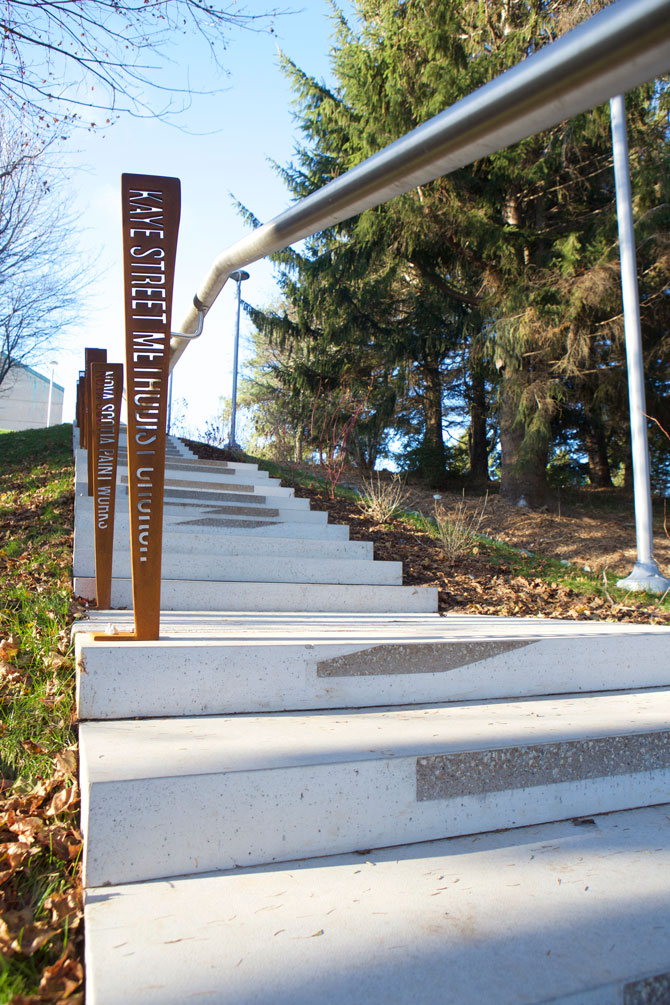 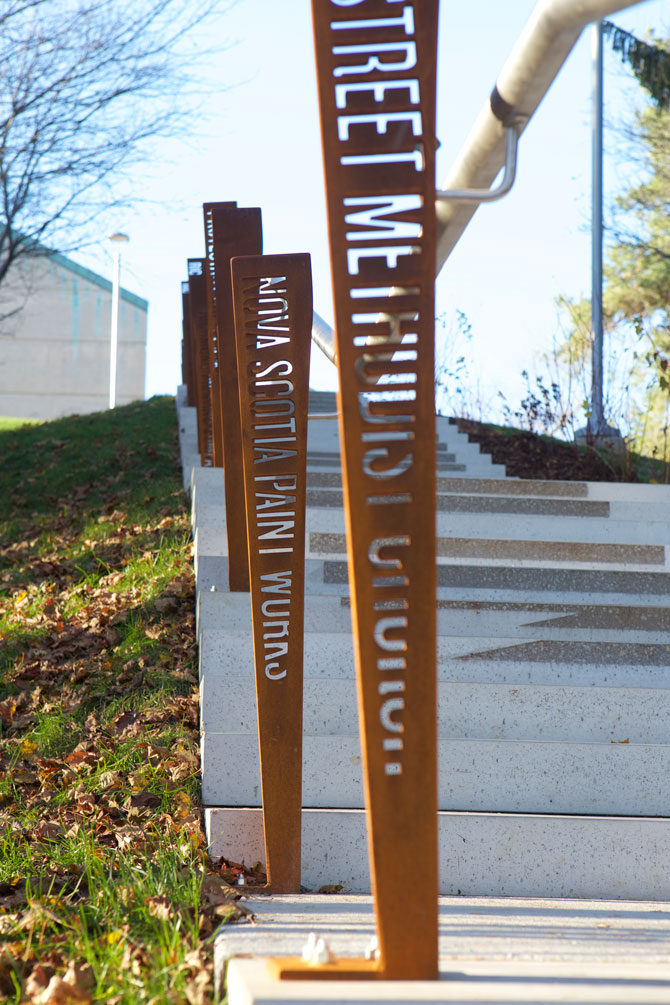 The staircase railing is constructed of pieces of bent half-inch steel, symbolizing shards. Explaining this choice, deWolf says, “It represents one of the terrible after-effects of the explosion, which was that the city was rained down upon by pieces of ships, buildings, rail cars, timbre, glass.”

There’s also a nighttime narrative light show, telling the story through waves of colour and gradations from white to red. “We worked with a script,” notes deWolf, “and it talked about midnight, dawn rising, people getting up to go to work, and two ships on the harbour signalling to each other—communicating through fog horn or perhaps light—leading to a collision, and then to a terrible explosion.” 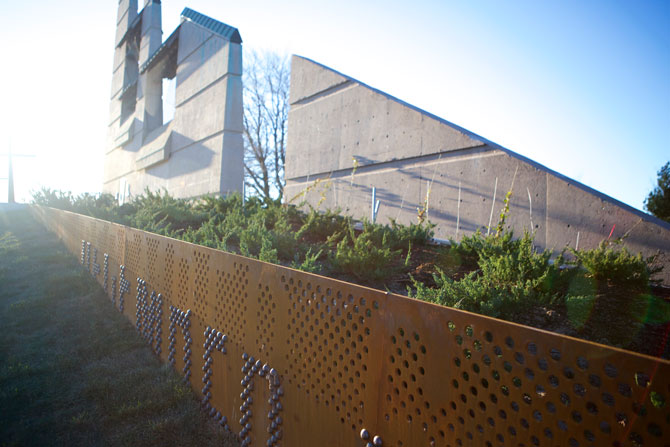 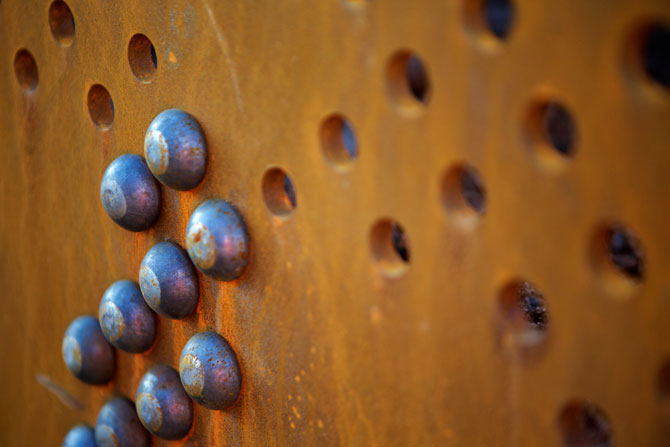 In spring 2016, Form:Media and Ekistics Planning & Design were awarded the Phase 1 project for Fort Needham Memorial Park. “The idea was to complete as much as we could for the 100th anniversary of the explosion,” says Cooke. “As a landscape architect, it was the first project I was part of that was so collaborative with someone like John from the experiential graphic design side, and with such strong interpretive thread through the whole design.”

Cooke joined the project after the master plan, which started in 2014, was already completed. “Altogether, it's been about a three-year project,” she says. “The team has changed, so you don't get the project fatigue the way you might had it been one person from the start. It always is helpful to introduce new team members to bring fresh eyes.” 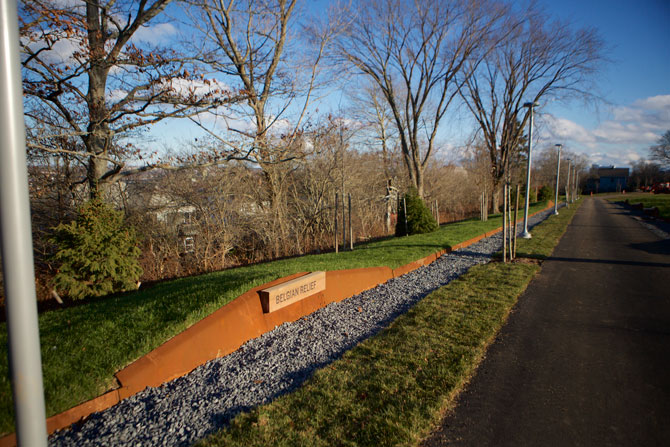 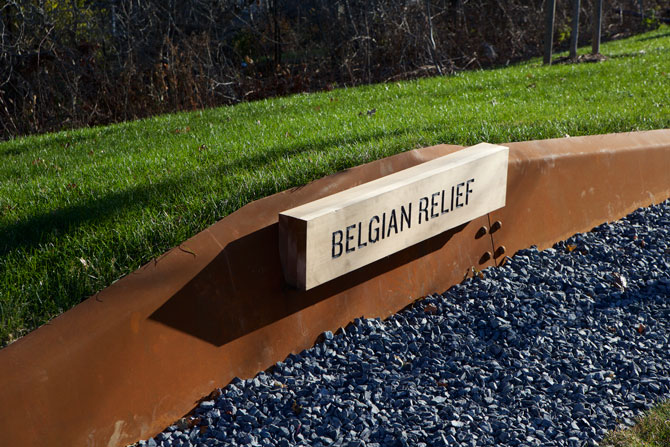 “The challenge we gave our team members to think about was, ‘How can we tell a sombre, traumatic story in such a way that it doesn't take away from the everyday experience of a public park?’” says deWolf. “That led us to things like avoiding didactic panels in this park.”

The Ekistics and Form:Media teams worked very closely with the commissioner. “Everyone from the Halifax Regional Municipality team was at the meetings,” says Cooke, “from the project manager to the person overseeing the construction phase, right through to the culture and heritage people who were closely tied to John’s work. It speaks to the collaborative aspect of this project.” 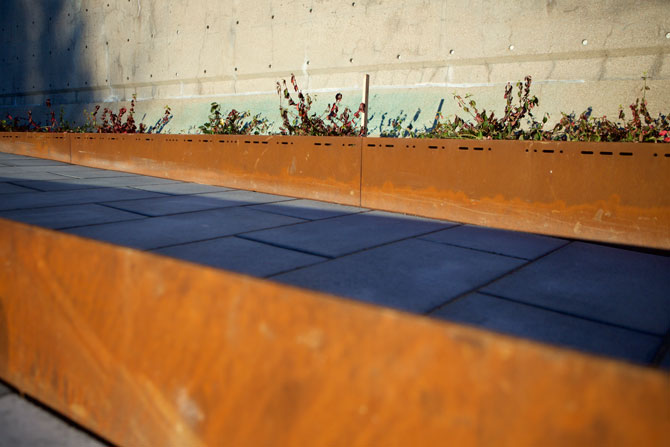 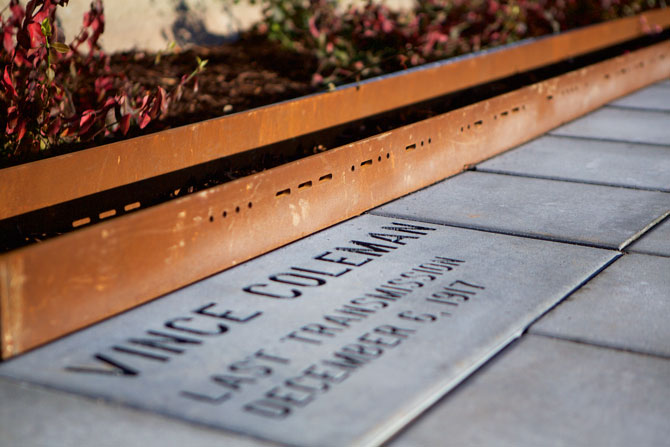 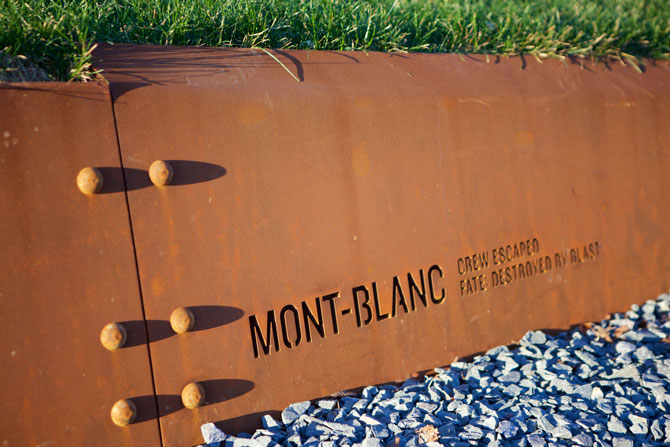 Every year, the city of Halifax has a ceremony on-site at the park to commemorate the anniversary of the explosion. For the centenary on December 6, the Fort Needham Memorial Project will be formally shown to the public.

“We really hope to get together with the people who have put in so much time—the steel fabricators, the contractors, all of the design team,” says Cooke.

With the addition of the Memorial Project, the park strengthens its place as a sacred spot for remembering the victims, while remaining a vibrant, public green space. “If someone’s going to the park to get an experience related to the explosion, I want them to come away with that through the interpretive elements,” she notes. “But if someone is going to enjoy a beautiful park, I hope that’s what they get.”

Nickie Shobeiry is a freelance writer.