DESIGNING FOR REVISION AND RESISTANCE

A book review by Will Novosedlik 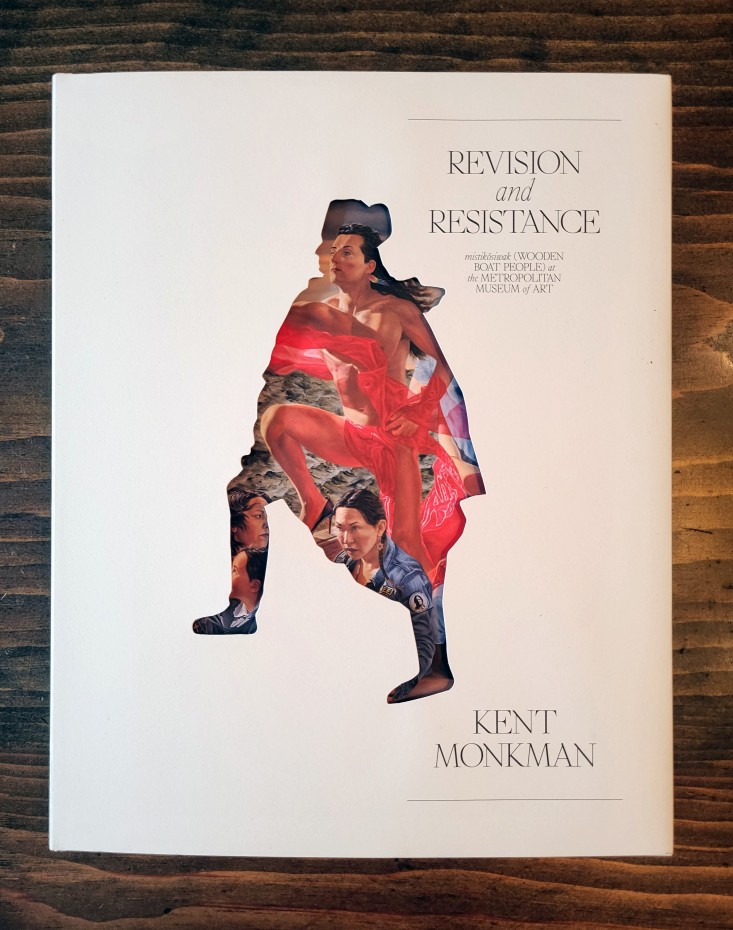 Underline Studio’s design for the cover of ‘Revision and Resistance’ uses a die-cut sleeve to reveal a detail from Kent Monkman’s ‘Resurgence of the People.’ The diecut is in the shape of George Washington, as represented in the painting ‘Washington Crossing the Delaware’ by Emmanuel Leutze, 1851.

Revision and Resistance documents the creation of a large-scale diptych conceived and painted by Canadian indigenous artist Kent Monkman. The diptych is entitled mistikôsiwak, a Cree word meaning ‘wooden boat people’. The work was specially commissioned to hang in the Great Hall of the Metropolitan Museum of Art in New York.

These paintings, as with all of Monkman’s work, act as counter-narratives to the colonialist myths that North Americans all grew up with. Monkman takes the tradition of history painting, which peaked in the nineteenth century, and appropriates both its content and its form to reimagine history through a decolonized lens.

As one of the essays in the book points out,  he has taken paintings by 19th century artists like Paul Kane, John Mix Stanley, Emmanuel Leutze and Albert Bierstadt, “and inserted subversive content that exposes the inherent racism of the originals.” To listen to the artist himself explain his practice in greater detail, this short video is both succinct and enlightening.

Washington Crossing the Delaware by Emmanuel Leutze, 1851. While he enjoys god-like status in the American origin story, the fact that he was also a slaveowner and an active contributor to Indigenous genocide takes the shine off his heroic profile.

The task of designing the book that documents these works fell to Toronto-based Underline Studio, founded by Claire Dawson and Fidel Peña. In the case of Revision and Resistance, the saying “you can’t tell a book by its cover” couldn’t be more wrong. The designers utilize the device of a die-cut sleeve to expose a key detail of one of the paintings in the diptych, The Resurgence of the People. The die-cut is in the shape of George Washington, as depicted in the 1851 painting Washington Crossing the Delaware by Emmanuel Leutze. In one fell swoop, the cover brilliantly captures the tension that animates all of Monkman’s work by revealing the Indigenous narrative behind the settler myth.

The Resurgence of the People, one of the paintings from the diptych mistikôsiwak, by Kent Monkman. As the book says, it is “a vision of the future, picturing a scenario in which Indigenous people and their values survive despite generations of genocidal colonialism.”

The written content of the book pivots between essays, interviews and a close look at Monkman’s studio practice, a throwback to the ateliers of the Renaissance, when the artist acted as creative director aided by a team of apprentices. In Monkman’s case a team of 18 artists worked on this project, with Monkman himself doing a fair share of the brushwork.

Monkman began the work with a careful tour of the Metropolitan Museum’s vast collection, selecting several works from the Western art historical canon as inspiration for his reimagining of history. The book does a thorough job of illustrating how these sources were used to inform Monkman’s vision. The sources are covered both in the essays and two sets of inserts, as seen below.

TOP: The original sources of Western art. Left, Mexican Girl Dying, by Thomas Crawford, 1846; middle, Massacre of the Innocents, by Francois Joseph Navez, 1824; right, Venus and Adonis, Peter Paul Rubens, 1630s. BELOW: how these sources are reinterpreted in mistikôsiwak. 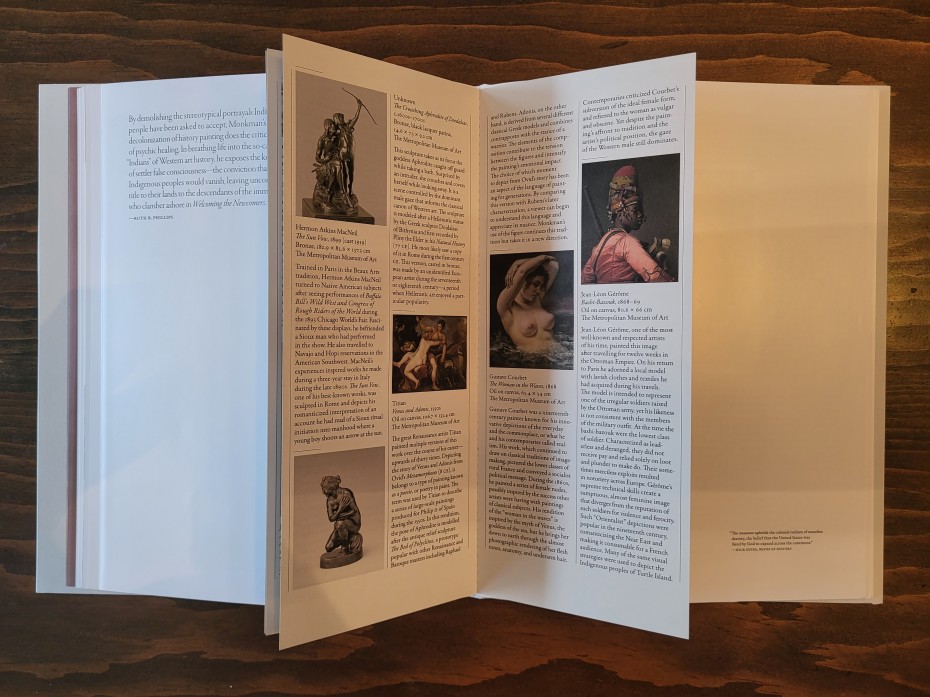 One of two sets of inserts that identify the items in the Metropolitan Museum’s permanent collection Monkman drew upon as source material for mistikôsiwak.

The most spectacular design element has to be the two roll-folded reproductions of the diptych. Each one folds out to a full size of 26.75”wide by x 11.75” high. Each roll-fold is positioned next to one of the aforementioned inserts, allowing the reader to read about the source material while studying the full painting. 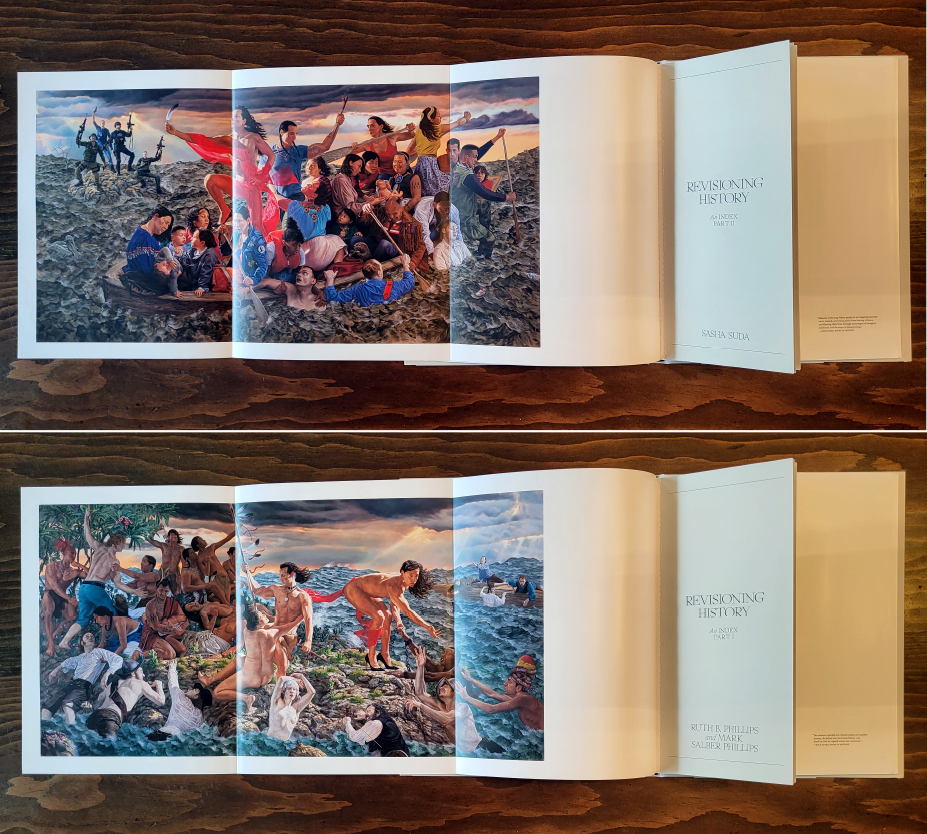 This review is rather late to the party, as the book was published in 2020, after the paintings were displayed at the Metropolitan Museum from December 2019 to April 2020. While this appraisal may be late, the work it celebrates is as relevant as ever.