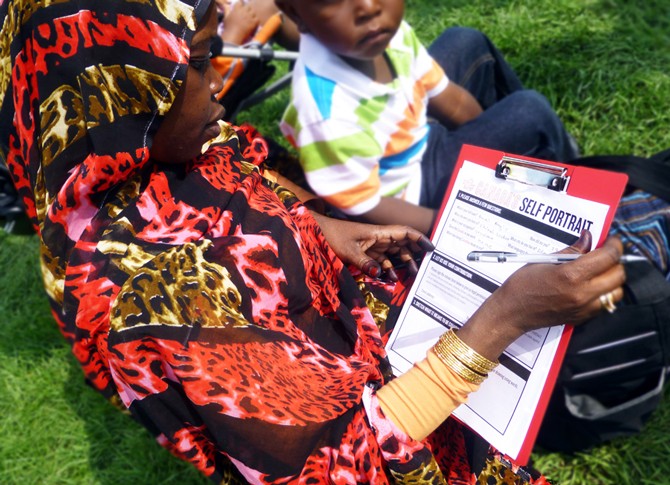 On Canada Day, July 1, Montreal artist and designer Aquil Virani will unveil his large-scale artwork incorporating more than 800 depictions of Canadian identity, submitted by Canadians coast to coast. For this collaborative project, called Canada’s Self Portrait, Virani and project co-founder Rebecca Jones trekked from St. John’s, Newfoundland to Victoria, BC in the summer of 2014, collecting and collating forms from everyday Canadians and notable officials that asked questions such as “What does being Canadian mean to you?” and “Describe Canada in one word.” Each participant was provided a box on the form to sketch his or her answer to what it means to be Canadian.

The gallery show takes place at Galerie Mile-End (5345 Park Ave.) in Montreal, July 1 from 5 pm to 7 pm. Virani and Jones also produced a short documentary summarizing their findings, which will be screened at the gallery and posted on Virani’s website.

Applied Arts recently spoke with Virani about the project and his findings. 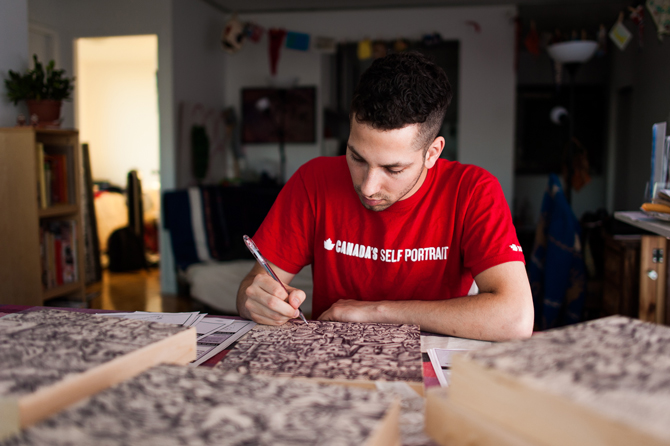 Tell me how you got the idea for Canada’s Self Portrait.

I’ve always looked for a way to include my “non” art friends in my art. Starting in high school, I wanted to do collaborative art projects so that my friends who were in calculus, English, etc. could do the kind of art I do. I would use a prompt or a restraint and use their drawing in my work. As the years went on, I did bigger and bigger projects, like the “We Are All Artists” project at McGill University, which had 300 submissions included in a 38” x 24” painting. I started doing these projects at school, and eventually different parts of the country after school.

Last year, I was hanging out with Rebecca [Jones], the co-founder and project partner of Canada’s Self Portrait. She found a note in my sketchbook where I’d thought of doing a Canada-wide project. She said, “Let’s do it, and we can do it big.” We thought about it and decided we could do it about Canadian identity and use the forms as a market research tool.

Two or three months before we left, we started an Indiegogo campaign. We started booking time with different organizations across the country to meet with them, because they could help us get submissions from a variety of people. We did a lot of couch surfing to keep costs low and the project more community based.

The Canadian Minister of Immigration and Citizenzhip and the Minsiter of Multiculturalism both participated in the project. Who else did you give the forms and sketches to? Did you hand them out at random in each city?

Pretty much! We wanted to have a representative sample size. We went to art galleries, but then the type of people who go to galleries might not go to grunge bars. We wanted different socioeconomic statuses and diversity of submissions in terms of ethnicity. We got First Nations groups in northern Quebec, in Winnipeg and in Northwest Territories. A lot of it was just going to somewhere public or a tourist destination, and asking people if they would participate.

There were a few trends with people’s responses to the project. The older people got, the less they trusted what we were doing. There was a notable decline in participants when we went to Quebec, particularly Quebec City, from people who identify as being Quebecois and not Canadian.

What else did you learn from the information on the form?

Some of it was biological information. About one-quarter of participants were born outside of Canada. We asked people to describe Canada in one word, and the main word used was “freedom.” When we had all of the submissions, Rebecca and I spent quite a bit of time cataloguing and theming them. We created an Excel file with information such as, this submission mentions diversity and Canadian weather, and this one mentions freedom. And from there we got percentages, which is one of the things we discuss in the documentary. 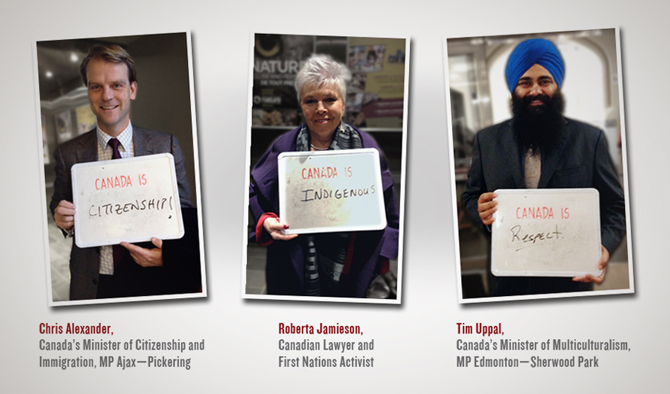 What has surprised you about the sketches you have received?

I was surprised to see some amazing drawings. With that kind of sample size, you’re going to get people who happen to be artists. There were a few that stood out. One that comes to mind was by a friend of mine who doesn’t consider himself an artist. He drew several shapes within a house — a triangle, a square, a circle. It was a simple drawing, but it represents Canada housing diversity. It was a really descriptive and cool way for him to express himself, and it didn’t require a lot of artistic skill.

I was still surprised, even knowing what I was getting into, at the diversity of opinion. There were positive, negative and profound things. Some people used pop culture. There was a lot of “I Am Canadian” from the Molson Canadian commercials.

What was really funny were the disparate ideas people had given where they grew up. In Saskatchewan, being Canadian meant wheat farming, whereas people in eastern provinces would say being Canadian means dealing with a crazy winter. On the West Coast, it was more about nature. It’s kind of funny to see that people with their own personal experiences have this idea about what the whole country is about, given their life in a particular province.

What was your favourite place that you visited?

Rebecca would say Winnipeg. I would say Winnipeg was tied for first. It is a really artsy city, very culturally rich, and just a cool, creative scene in terms of art, music and entertainment. We met a gentleman in Winnipeg who was an artist and teacher, and he paid for our dinner without telling us. You remember that.

The other place for me was Jasper. I thought I’d seen beauty before being on the West Coast, but this was 3D beauty. You’re just immersed in it, and these giant mountains are all around you.

Is there any one sketch that you identify with as a Canadian?

There were so many. There was one of an egg hatching. That’s referring to Canadian identity being young and unformed. We’re such a young country relative to others, so much so that it’s almost excusable that we don’t always agree.

Every single drawing is in the finished artwork, which is part of the inclusive concept of the projects. I want everyone to feel like they are a part of it — they aren’t going to be judged and they won’t be cut. 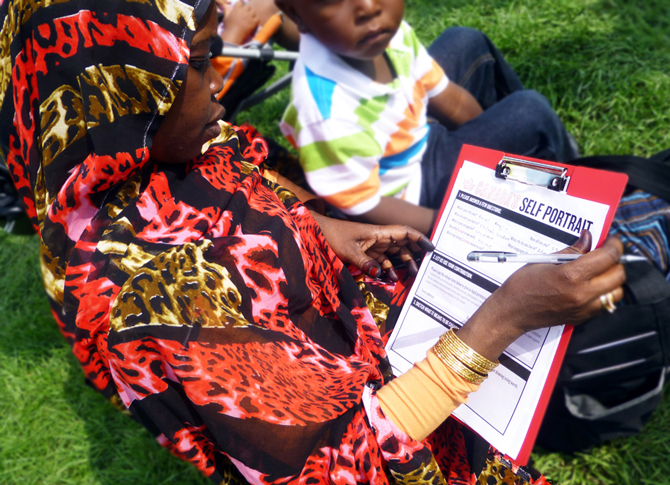 Tell me about your final art piece and how it’s come together. How do you tackle incorporating so many images into the finished product?

What I like to do is come up with a macro image. You want the doodles to form an image from afar to bring the viewer in. I decided to have a collage of portrait features, and the doodles go on top of the facial features. I use value and cross-hatching to make the features more pronounced.

I’m using ballpoint pen on 10” x 10” wooden birch panels. In the end, it should be about 6 panels by 3 panels. Those will be spread out with an inch between them. It has become more of a fine art piece to fill a wall. In the beginning I thought maybe it would be a mural or a wall painting. I made it in panels so it transports well. Once it’s created I can apply to more places across the country. We are applying to have the exhibit tour a bit.

I’m also making an additional body of artwork to supplement the main piece, to fill the gallery space and express a bit more about Canadian identity. If you try to cram too much into one piece, it doesn’t work. I wanted to communicate other aspects of Canadian identity, using some of the best submissions. There’s a gun with a bullet shooting out of it that says “sorry.” It’s an interesting juxtaposition of violence and warfare with Canadians being polite.

It’s hard to remember what I knew before. I think what I’ve learned is that Canadian identity is more about this light at the end of the tunnel, or a donut that’s right in front of you, just out of your reach. Given the reality of Canadian society, it isn’t perfect. We believe in diversity, but we have plenty of First Nations communities that are mistreated. There’s plenty of racism that still exists. We believe in preserving our beautiful nature, but some government decisions don’t support our environmentalism.

Some of our ideals aren’t necessarily reality but they are goals that help define us and take our society where we want to go. Multiculturalism and freedom are things that we should strive to do better at, not things that exist 100 per cent.

What would you say to those who say Canada has no real identity?

I see where people are coming from when they think that Canada has no one identity, and I empathize with that. By being a citizen of a country there is something about a shared set of values, and when you choose to spend your life here, you are making a decision of who you are and that should fit with Canadian values.

But some submissions said that Canada is a world country, or Canada is the first post-national country. I think Canada has the right type of patriotism or nationalism, in that we understand that idea is limiting. That comes from having a whole body of immigrants who get that the restraints put up by national boundaries are artificial. It’s too early to tell Canada if has no identity. These things take years and years and generations and generations to fully form. That’s why we don’t all fully agree…you get all these ideas and not a singular one, which you might get in a more developed and older country.

What’s next for you and the project?

One of the main goals is to turn the question around: not what does being Canadian mean, but what are you going to do to make Canada a better place? Let’s ask people about it and get the conversation going. In the end, art has a lot of value in motivating different types of actions. In the documentary, one of the things we wanted to end with was, if Canada’s direction isn’t going in a way you like, what are you going to do to stop it and make your voice heard?