Evolution: Life in the Land of the Dead

Behind the scenes of Coco with animator Brendan Beesley

Seneca College’s School of Creative Arts and Animation is clearly doing something very right: Six alumni recently celebrated their visual effects and animation work on the Academy Award-winning films Coco and The Shape of Water.

We asked Seneca 3D Animation graduate and Pixar animator Brendan Beesley to share some behind-the-scenes secrets about working with director Lee Unkrich and bringing Coco’s lead characters to life. The film—Beesely’s fifth project for Pixar Animation since joining the company in 2013—chronicles the journey of 12-year-old Miguel, a budding musician who defies his family’s generations-old ban on music. Beesley, whose previous projects include Inside Out, Finding Dory, The Good Dinosaur and Cars 3, animated Miguel and his great-grandmother Mamá Coco. He helped create a style language for expressions, body posture and movement, and spent six weeks working on the film’s pivotal scene, “Talent Show,” where Miguel performs onstage in the Land of the Dead.

By the time animators like Beesley are chosen to work on the film, character designs have been approved and early storyboards done, along with some scratch dialogue, says Beesley, who immediately connected with Coco’s story.

“The characters had so much depth, and I could already imagine a lot of these scenes being fleshed out and what they would look like; it just felt so real to me,” recalls Beesley. “When you go home at night and you're thinking about the scenes, what the characters are thinking, and you’re trying to get inside their heads and understand the subtext to their body language, you know you’re deeply invested.” 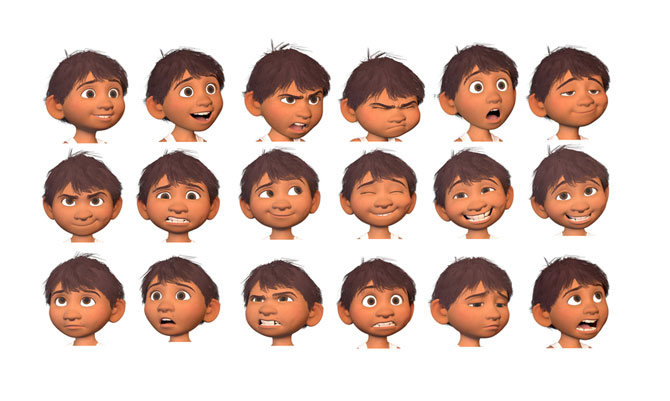 Sculpted by one of Pixar’s lead animators, various expressions are saved into the project’s Pose Library, explains Beesley.

“There are many poses for each character, including mouth shapes, hand poses, and eye and brow poses. When beginning a shot, we can click on any of these, and they’re applied to the character we've selected. This process helps give us a foundation for where we will eventually take our animation.” 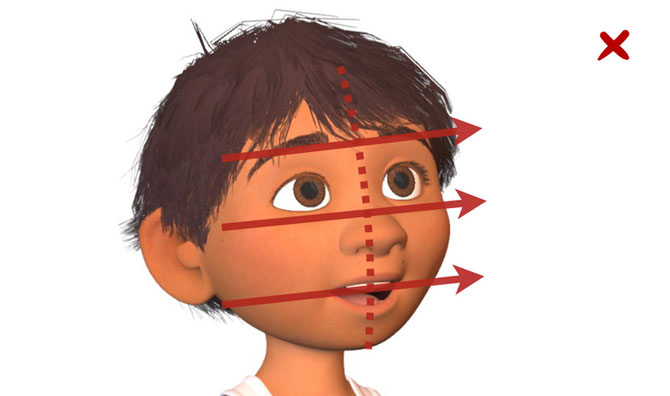 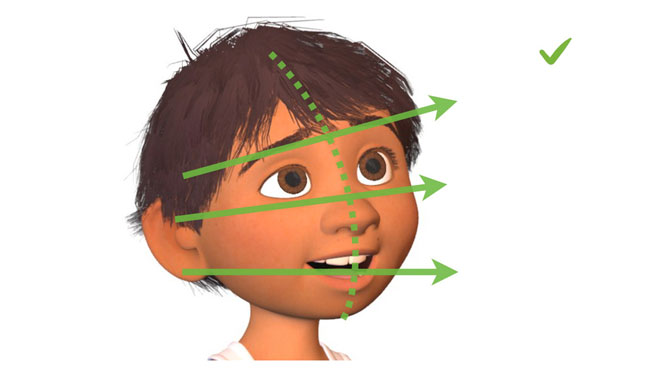 Incorrect and correct face proportions for Miguel, by Kristophe Vergne

Rules established by lead animators outline things to avoid when posing Miguel. “These images are taken from a 'model pack,' which is created for every main character in the film,” says Beesley. “These examples also illustrate shapes that add appeal to a character, such as the screen grab of Miguel's eyes.”

Beesley was tapped to animate the scenes where Miguel starts to sing, which proved challenging because he's not talking.

“There's so much subtext happening in this sequence: He's singing, but everything happening in his mind is being shown through his body. Lee wanted to see a growing confidence in Miguel’s body language, but he didn’t want it to feel choreographed. He wanted Miguel to wing it,” he says.

The “Talent Show” sequence was integral to the film, because that’s where Miguel comes out of his shell while performing for the crowd, notes Beesley, who drew sketches to figure out how Miguel would look when he’s nervous.

Seeing a special Mexican-inspired Cirque du Soleil performance of Luzia, which took place in Pixar’s atrium in December 2016 while the animation team was working on Coco, prompted Beesley to notice the show’s focus on silhouetting.

“They have to choreograph a performance that can been seen by an audience looking at their stage within a 180-degree range, so the angles in which they present themselves is paramount in conveying their ideas,” explains Beesley.

“While animating Miguel, I was constantly checking in to make sure my poses had strong readability. I did a few initial sketches to map out some of the poses I wanted to exhibit through my run of shots.”

“He’s proving to himself that he is a musician now, so it's a powerful moment in his own development,” he explains. “I like the arc that we see in Miguel: He does a complete 180 from when I started animating him. He tentatively begins playing and by the end of my shots in that sequence, he gets to a place where he's not even thinking about the audience. He's just in the moment.”

“I tried to capture Miguel’s growing energy in some of his dance moves, then I went into the computer and started progressing with choreography—how Miguel moved around the stage. I just did it as though I was onstage. I did the blocking pass, and Lee really liked the overall energy. He really loved the idea of a foot stomp that Miguel was going to do. It was tricky, but I worked it in.” 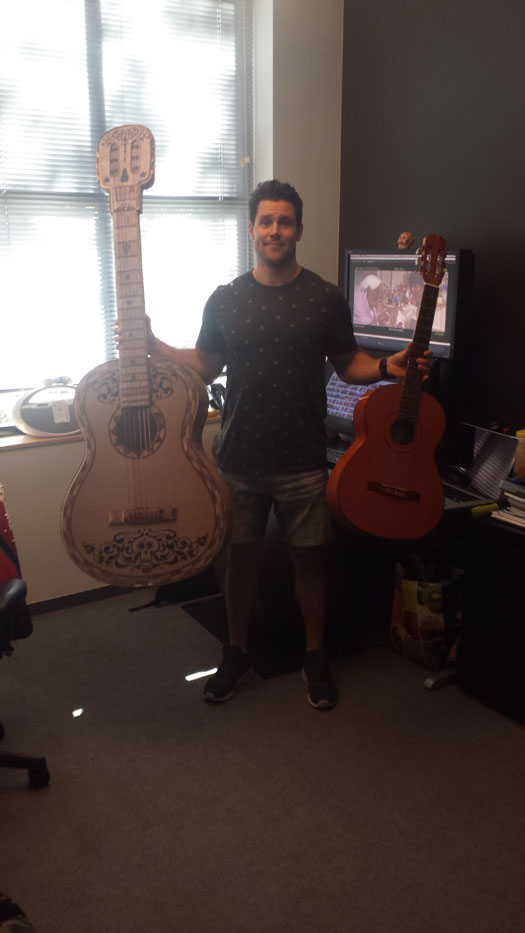 Beesley’s team had video references for all of the actual guitar tablature to which they could match Miguel's animation, making this scene even more authentic.

“When you watch that sequence, you don't even really see that detail, but it's in there, and it's probably what took me the most time to do: Just figuring out the guitar chords alone took a week and a half,” he recalls. 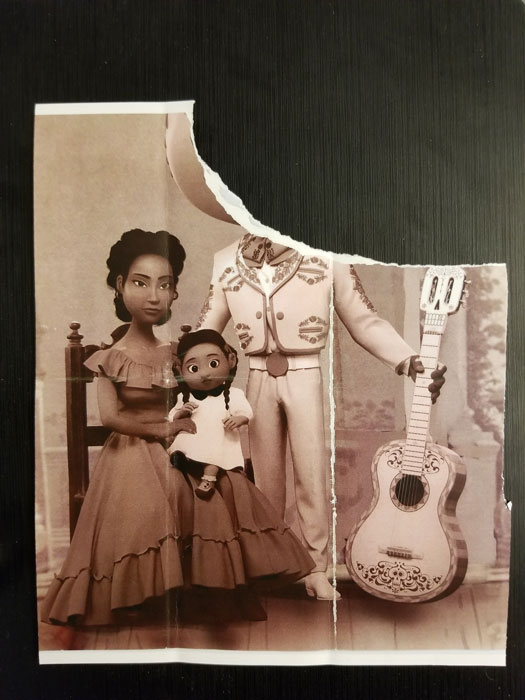 “Miguel carries this photo with him throughout the film, so we thought it would be a great idea to have a tangible copy of it, to see how delicately it would need to be handled or what it could withstand,” says Beesley, noting that the photo was printed on a similar paper as what appears in Coco, then folded and torn in the same spot.

“One nuance that was observed from holding this photo was a subtle, high-rate vibration on the corners of the photo. We included this in our animation, and helped infuse the performances with life, especially when there are 'keep alive' close-ups of the photo.” 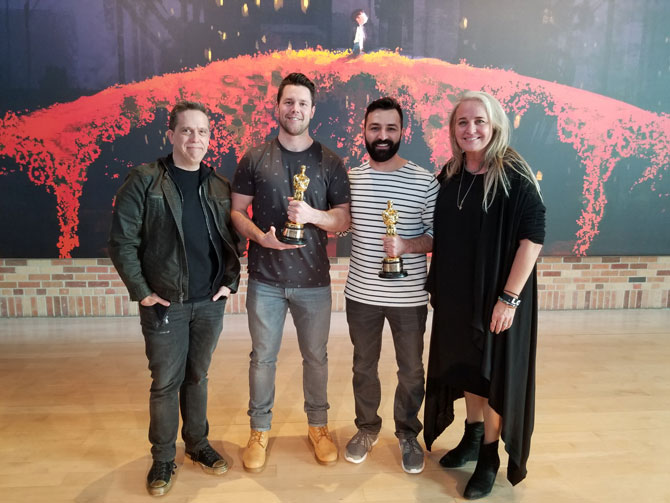 “They brought the Oscar back the Monday following the Oscars, and we had a big company meeting in the atrium with a champagne toast,” says Beesley, who recently wrapped up work on Incredibles 2.

“I still have lots of learning to do here at Pixar; it's one giant piece of priceless education and I just try to soak it up as much as possible. Probably once a day I just take a moment as I walk through Pixar’s atrium just to look around and remember where I am. I feel really proud to be part of this.”

See final stills from the film in the top slider.

Wendy Helfenbaum is a Montreal-based freelance writer and TV producer.