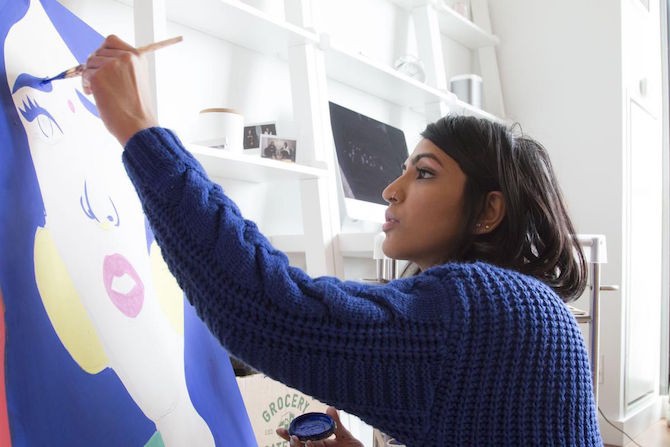 Painter and illustrator Maria Qamar talks about her work for The Yogen Früz Pinkberry Brain Project and the beginnings of her career.

When Maria Qamar aka Hatecopy was asked to create a piece for The Yogen Früz Pinkberry Brain Project, an outdoor art exhibit aimed to shed light on brain health and raise money for Baycrest Foundatin, she says “the opportunity was massive.” For its third year, Qamar has been chosen as one of the 43 artists asked to transform a blank brain sculpture into a unique design.

The Brain Project is just one of many upcoming projects for Qamar. Known for her pop-art style paintings and illustrations depicting life as a Desi woman in the West, she has created her own space in the often monolithic genre of pop art. Working from her own experiences of racism, appropriation and other themes, her work has garnered a large following. Now she’s branching out from her infamous Instagram account. However, her signature Hatecopy style follows her everywhere. 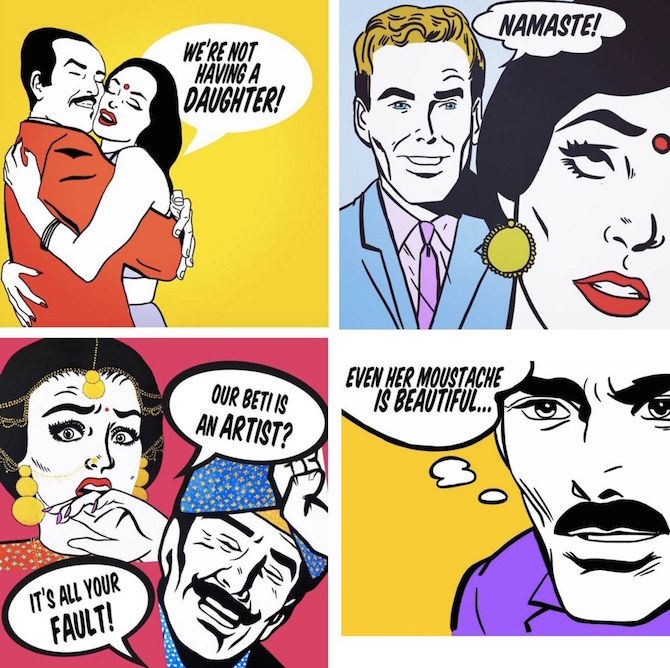 This is clearly evident with her piece for The Brain Project. Originally Qamar planned to cover her brain with her 2015 pattern ‘Get Me Out.’ Only after this was completed did she realize she wanted to do something entirely different. “This was very close to the due date,” she says while laughing. To redesign her brain, she took it outside and doused it in red spray paint. What emerged was a remix of her own pattern, this time with her original design shining underneath. “It kind of screams danger, the red has a lot of meaning to it, ignites fear and anger.” When one visits Qamar’s brain, which is on display at Nathan Phillips Square, she wants you to “inspect it closely and look at all the brush strokes and imperfections." Qamar has dedicated her brain to the women who helped her remember where she came from. 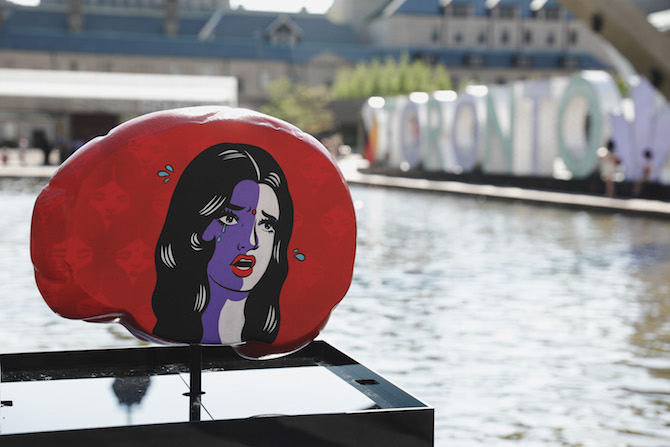 You could say that Qamar’s life began to shift after the release of her book ‘Trust No Aunty’ last August, she says its had a “chain effect.” But, it was the groundwork that she laid before that led to this shift. “For me to kind of get into this space, I had to make all these lanes by myself. It’s just me, not like a team of people crafting the next move, it’s really just me moving with the way things are going online and offline.” 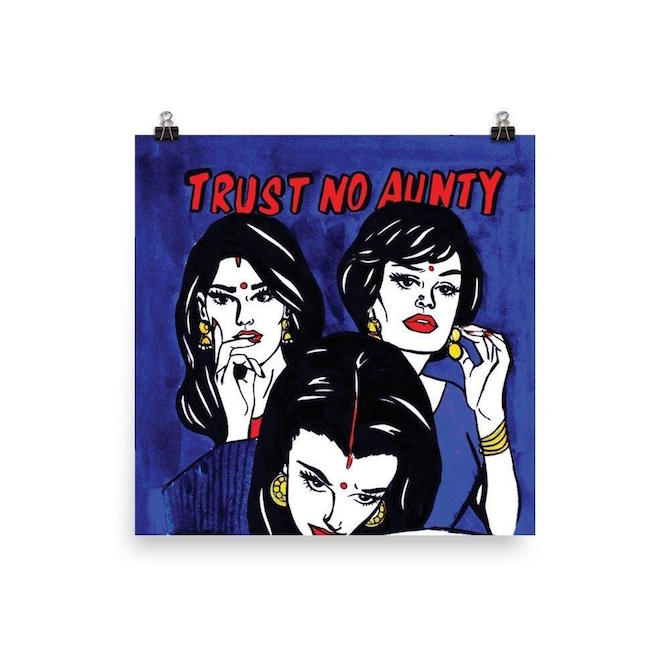 In the past three years since Qamar became known as Hatecopy, she’s designed clothes, created a painting for Mindy Kaling’s show ‘The Mindy Project’ and appeared on the cover of Elle Canada. She’s been interviewed by countless publications and appeared on morning talk shows. But things haven’t always been like this. Before her life as the artist Hatecopy, Qamar was working at a Toronto ad agency.

“I had always wanted to be an artist, it was circumstances that led me to end up in advertising,” she says. After high school, Qamar put herself through ad school, where during the second half of her program, she focused on copywriting. From there she was hired at an agency, despite having her mind set on becoming a painter. “I wasn’t the model co-worker but, I had ideas and they needed to be out there.” 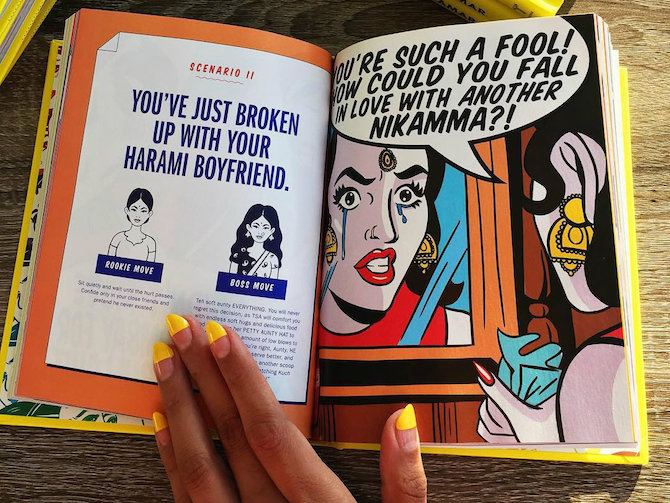 Working at the agency wasn’t Qamar’s goal or dream and thus she ended up experiencing a range of emotions. “I was angry at the fact that I was still working at a desk and answering to people, I was getting other people to approve my work and that didn’t work for me,” she says. Perhaps it’s this exact tenacity that’s propelled Qamar to where she is today. With her own work displayed at a public art exhibition. 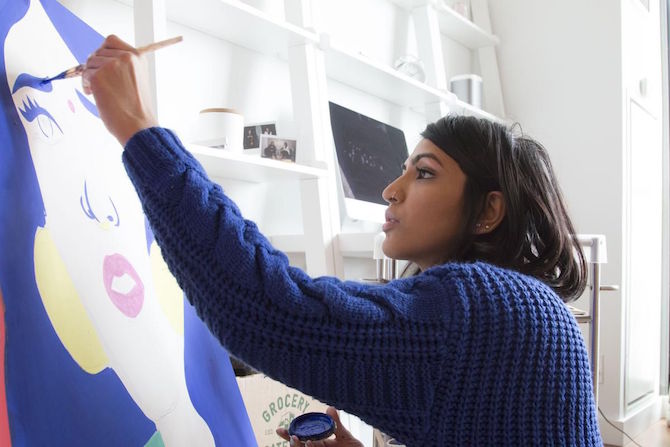 Despite this, she says working in advertising was beneficial to her career. “The first thing you learn in ad school is how to face rejection and how to face it often.” It’s also where she got her moniker Hatecopy from. “I wasn’t a huge fan of copywriting, it wasn’t something I wanted to do, I wanted to draw, that’s sort of where the name came from, when the art started picking up a little bit, at that point it was a little too late for me to change [my name],” she says.

Eventually Qamar left the world of advertising and started her dream career as Hatecopy. It may have been a long journey for her but, it was necessary and important nonetheless. "A lot of people don't understand that even before advertising, I always [thought] I had to do all of these things, go through all these hurdles, for me to get to something bigger," she says. 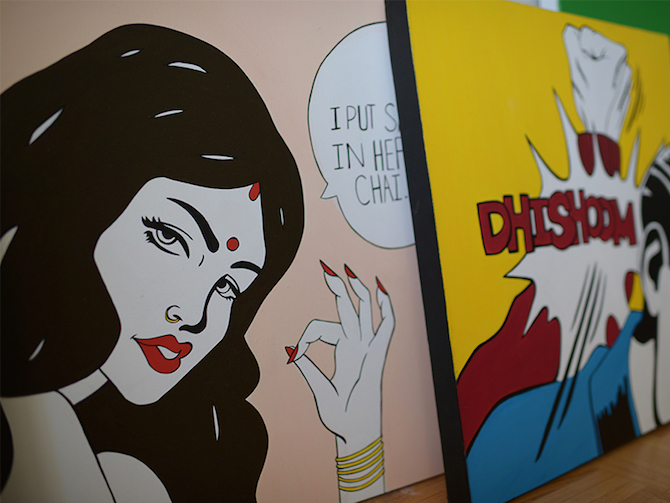 Learn more about The Brain Project and where the brains are located.