The award-winning, Nanaimo-based branding and design studio, which creates packaging for wineries, breweries and distilleries, shared with us their latest work for Wayward Distillation House.

The brand-new distillery, located in Courtenay, BC, is releasing its Unruly line of premium vodka and gin to local high-end liquor stores in September.

Richard Hatter, creative director at Hired Guns, says highlighting what makes Wayward Distillation House unique was paramount in his design. In a first for Canada, the distillery uses honey as the base for its spirits instead of neutral grains such as barley, potatoes or corn.

“The taste is really noticeable,” says Hatter. “We did a blind taste test comparing Smirnoff, Grey Goose and Unruly Vodka. Unruly was hands-down the best tasting.”

Hatter says he wanted to avoid the expected with his design. “I didn’t want to go with a fuzzy bumblebee with yellow and black stripes,” he explains. “I wanted to show the pairing of the distiller and bee that creates the Unruly spirit. One can’t exist without the other.”

The bottles are surrounded by housing that display Hatter’s vector illustrations of an oversized bee clutching the distiller mid-flight on one side, and a pair of distillers on the other (Wayward is run by a husband-and-wife team). “The unruliness comes through with the client — they’re off-the-wall and unpredictable and cool, and so are bees, in a way. We wanted to play up that whole side of it,” he says. 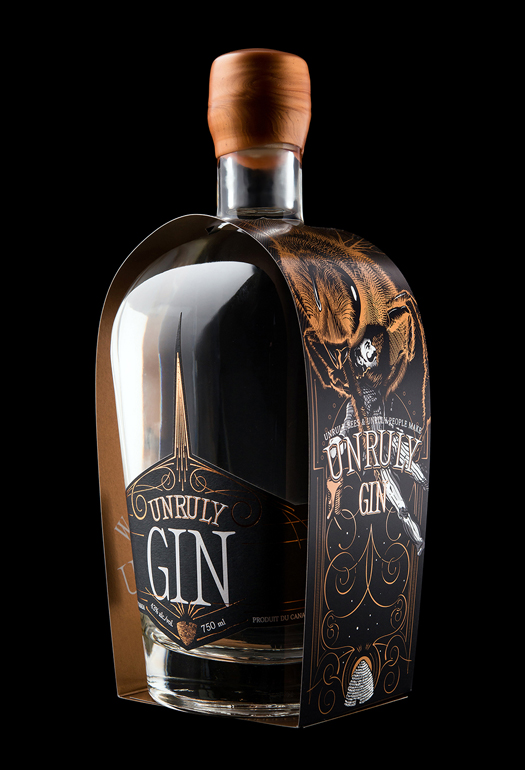 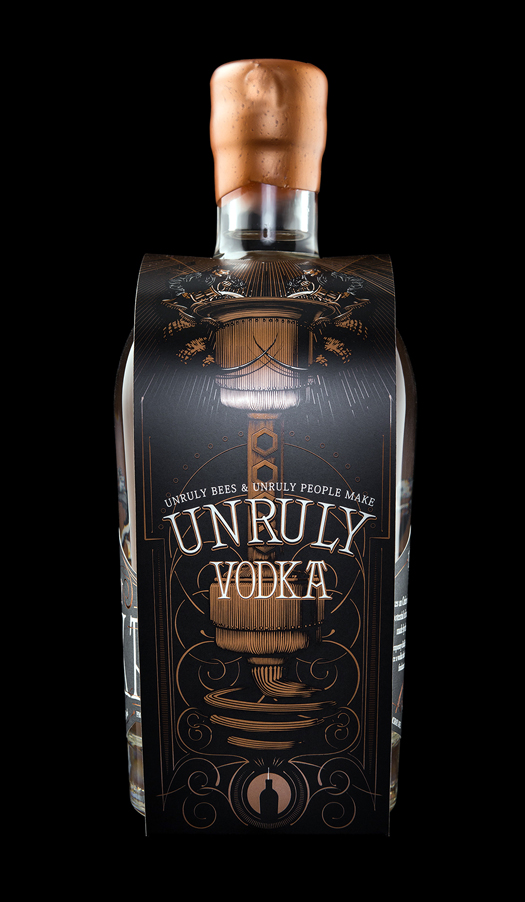 Leif Miltenberger, business director at Hired Guns, says that Wayward wanted to apply the labels to the bottles by hand, which gave Hatter more creative licence. “It freed us up from some of the constraints of an automatic labeling machine,” he says.

“I had to use this glass [for the bottle], which is unruly in itself. It goes from square to round,” Hatter says. “It was really hard to work with, but it didn’t scare me.”

He found a flat surface to apply the bottle’s sticker to, but wanted more room for artwork. “I had to think of how to increase the surface area, and came up with the concept of the housing that wraps around,” he says. 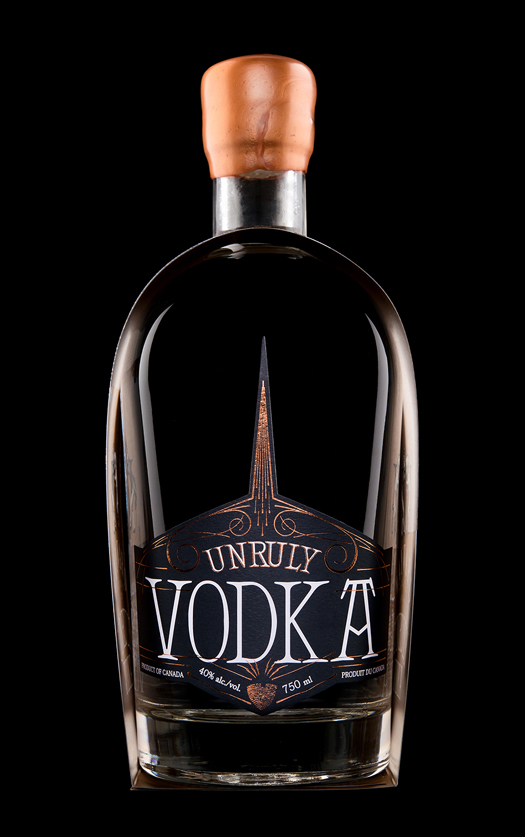 Hatter’s original intention was to wrap the housing in a foil stamp, but their printer advised against. “Hemlock Printers said it was not a good idea to put that much foil down with that much detail,” he explains. “So we came up with the idea to do the copper metallic ink, and hit it with their UV technology. It created a cool, shimmery effect.”

Miltenberger says the Wayward Distillation House team is delighted with the packaging: “We just presented them another line of spirit packaging in a different look, for a different product. They accepted it on the spot.”

His clients have also used the Hired Guns work to acquire extra funding from Community Futures, a financing and advisory group for small businesses. “The people at Community Futures said the packaging played a huge role in that decision,” Miltenberger says. “They could see how serious [Wayward] was and how well the product would do in a retail space.” 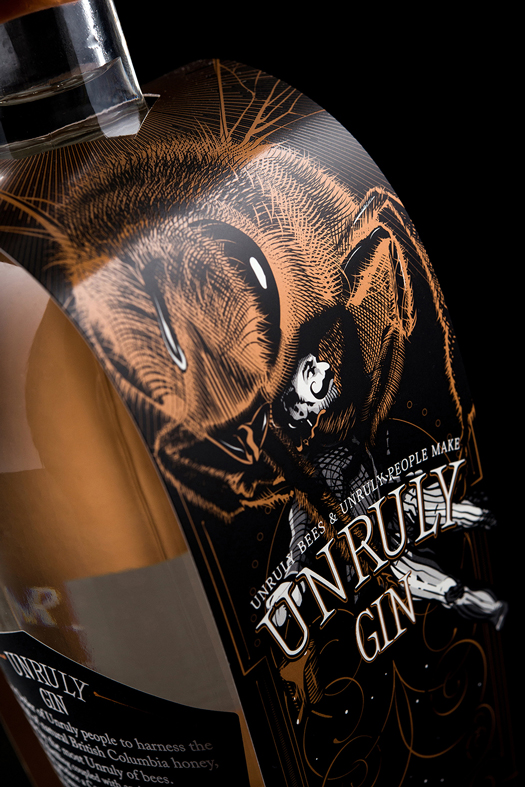 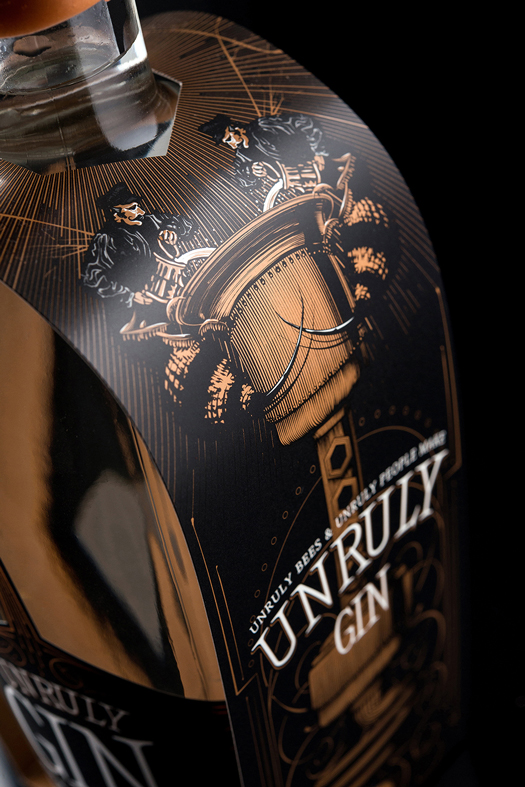 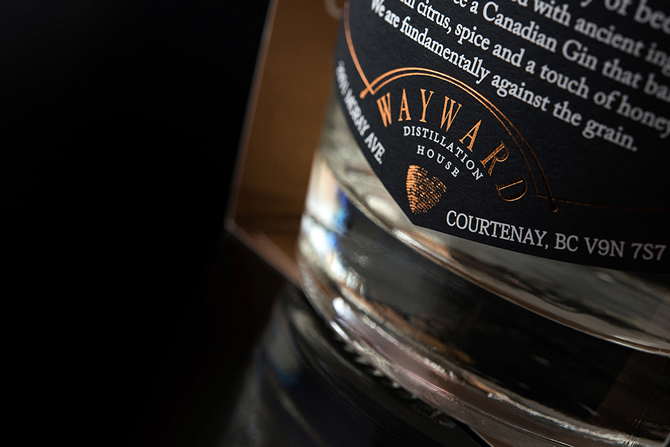