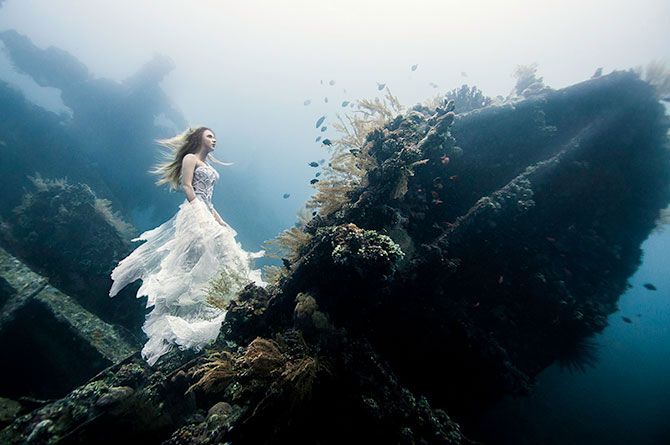 Last winter, Benjamin Von Wong was at the bottom of the Pacific Ocean.

Like many people who flock to the coast of Bali to scuba dive at Tulamben, a renowned site marked by the wreck of World War II cargo ship USAT Liberty, Von Wong had his camera. But this was no underwater disposable. Unlike his fellow divers, Von Wong was 25 metres (82 feet) below the surface setting up his Nikon D90 encased in Aquatica housing, surrounded by a crowd-sourced production crew and free-diver models in full hair and makeup and flowing gowns. One model had flown in from Jakarta, another from Dubai. A videographer came from Singapore. All were there because they love to create art — in this case a concept dreamed up entirely by the Montreal-based photographer.

That’s how it is for Von Wong. He puts out the call, and the people will come.

The resulting series of images is nothing short of surreal: fully clothed, open-eyed models, perched on a rotting, waterlogged wreck with mermaid-like finesse, their hair undulating in the current. “That’s what I wanted. I want people to disbelieve it, so when I put up a behind-the-scenes photo, you can’t notice what’s real and what’s fake,” he says.

Von Wong does more than create a perfect picture — in fact, he’s spawned a new category of image-maker altogether. He’s a photographer, yes, but he’s also a videographer, a virtual tutor, a sorcerer of photo manipulation, a master of social media and content generation, and an avid sharer of all things behind-the-scenes.

It’s a long resume for someone who is only 27 years old, and his multi-talents don’t fit neatly into a certain label. He speaks three languages, played the violin for 10 years and hopped between 13 schools as a kid. “The greatest challenge is to figure out how to tell people what I can do. If you say everything, then people just assume you’re a jack-of-all-trades, and that you’re not really good at anything. But it’s the concept that everything is inter-dependent,” he says. “It’s more than the photo itself. It’s about all the things you can do around it.”

That mentality is what led Von Wong’s agent, Suzy Johnston of Suzy Johnston + Associates, to coin the term “visual engineer.” It’s an apt descriptor for someone who believes that crafting the story is paramount, that visual stimulation without context means people quickly lose interest. “I always feel like there are two stories to every image,” Von Wong says. “There’s the image itself, and then the story of how that image was created.” 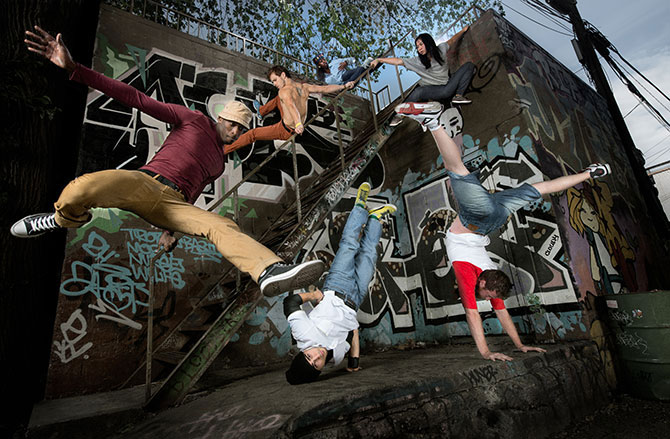 Sometimes, the story is more than a little madcap. One of his projects saw him coordinating a Where’s Waldo–themed photograph for the town of Traunstein, Germany. Von Wong acted as director, helping organizers plan the shots to create an 85-gigabyte image that, blown up, shows every detail of the 400 people in the picture. “You’re talking about this really tiny city in the middle of Germany, and there’s people dressed up in Batman costumes, in Bavarian costumes. We had everything from body painters to fire spitters to tam tams to a five-person bicycle. It’s this completely surreal thing.”

It wasn’t always like this for Von Wong. Less than seven years ago, he knew nothing about photography (he didn’t even own a camera). He was a different type of engineer, working in remote mines in Winnemucca, Nevada and Labrador City, Newfoundland. To kill time on weekends, he picked up a point-and-shoot camera to photograph the night sky. Once he upgraded to a DSLR, Von Wong turned to the Internet to learn how to use it and to teach himself photo-editing software. “For someone like me who’s never learned any of this in a school environment, it’s just about tossing myself in,” he says. “The fun thing about the Internet today is anyone can make it. You just have to be able to put the work into it.”

Event photography kept Von Wong busy in his spare time before he devoted his attention to the fanciful creative pieces he’s famous for today. He started a blog to document his endeavours, and recorded behind-the-scenes video to deconstruct the notion of the unbelievable he so often explores — a way of giving back to the web community that had taught him so much. “The response from [the videos] really skyrocketed my popularity in the blogosphere,” he explains.

After 3.5 years working as a junior mining engineer, Von Wong knew he needed to move on. He received his full engineer certificate, ticked the “I did it” box and quit with little idea of what he might do next.

But the answer was obvious: he quickly fell into freelance photography full-time and decided to turn his budding blog into a business by invoking what’s now become the Von Wong way — get the people to come to you. In 2012, he started a crowd-funding project, raising over $12,000 from supporters to travel through Europe for a month on a quest to produce a collection of phantasmagorical photographs. He turned to social media to source everything from potential subjects to local production crews, and to share everything about the process along the way.

“The world is changing and there is no rulebook to what we do and how we do this,” Von Wong says. “The ones pushing are the ones who we hear about, the ones trying different things and approaches. You can’t just be one thing now. You have to do everything.”

That sensibility is what pushes him to keep learning and trying new techniques, all in pursuit of the story. “If the machines can do it, you should be able to do it, too. People are going to expect it. They’re going to expect you to do everything your device can do,” he says.

Through his blog and social media, Von Wong has branded himself as someone who not only understands the need for new content, but who is just as comfortable in front of the camera as behind it. Any given project warrants a series of blog posts, behind-the-scenes video, on-location photo shares, tweets and product reviews. “My life is about creating content that is engaging and visual and interesting and compelling,” he says. “I get to inspire others to reach out…the fans, the following. All that stuff is really validating. It’s meaningful.”

Equally as important is Von Wong’s instinctive desire to do what he can to make a difference. Earlier this year, he was approached to shoot a video for Saving Eliza, a web-based fundraiser for a gene-therapy trial that would help a four-year-old girl in South Carolina with a degenerative genetic disorder. Von Wong shot the video, organized a talk and t-shirt sales, and provided the family with extra behind-the-scenes content and interviews that they could release on an ongoing basis to keep the story newsworthy. He also set up his own fundraising initiative for Saving Eliza on photo-sharing website SmugMug, asking photographer friends to pledge to sell $1,000 worth of prints. As of press time, the family had raised over $1 million of its $1.8-million goal. “It’s keeping it relevant, it’s keeping it current, it’s generating that traction and interest,” says Von Wong. “This entire idea of strategizing the content releases and the press releases is something I’ve been working on with [the family] to make sure that their campaign is successful.” 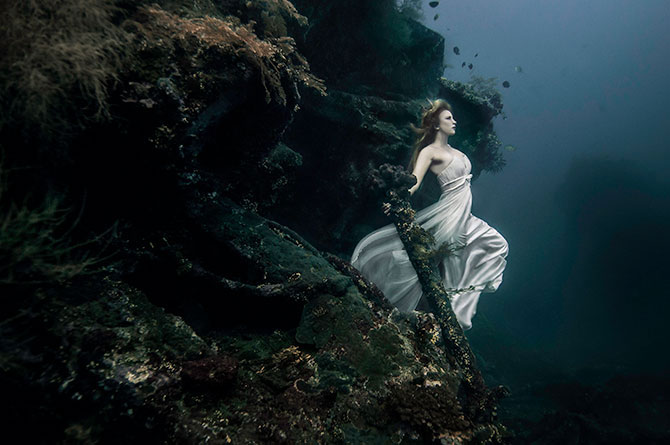 Von Wong’s unconventional style recently caught the attention of Adobe, which interviewed him for its “Creative Voices” video series. The nine-minute featurette follows Von Wong’s travels, pausing in Toronto for a fantasy shoot that crowd sourced everyone from models to a taxidermist. Von Wong further engaged his fans by inviting a few of them to join him on the shoot. “When you’re starting out, it’s so hard to find somebody who’s going to let you come and watch the process. People don’t offer the opportunity. For me, I just think it’s so nice to put it out there,” he says. 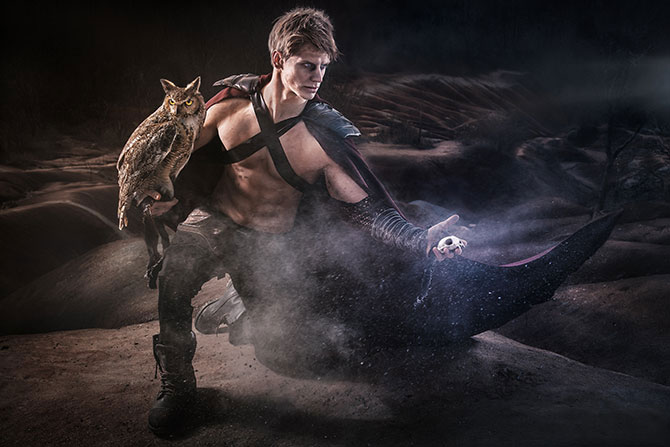 Fantastical creative visions and understanding of content strategy are key to Von Wong’s commercial appeal. Past clients have included Leo Burnett Chicago and the National Slovak Theatre. “You don’t want to sink half-a-million dollars into a campaign and only have one picture to show for it when you could have all the planning behind it,” he says. “If you build that into your campaign, then suddenly you have an entire year’s worth of content that you can space out and strategize.”

He applies this outlook to all of his projects. One of his seminal photographs is of himself as a fire-breather, shirtless and inked with henna. In an effort to garner new buzz and capitalize on users’ weakness for feline memes, he posted the fire-breathing picture (originally created to promote a henna artist) to his blog alongside another shirtless image of himself with a kitten on his shoulder, and appealed to his followers to vote on their favourite (in an unofficial count, the fire won).

“The work that I’m paid to do and the work that I do creatively have no boundaries. It’s all interwoven, which makes it, in my opinion, an authentic picture,” he says. “People don’t feel like they’re being sold to; they just see cool things pass by.” 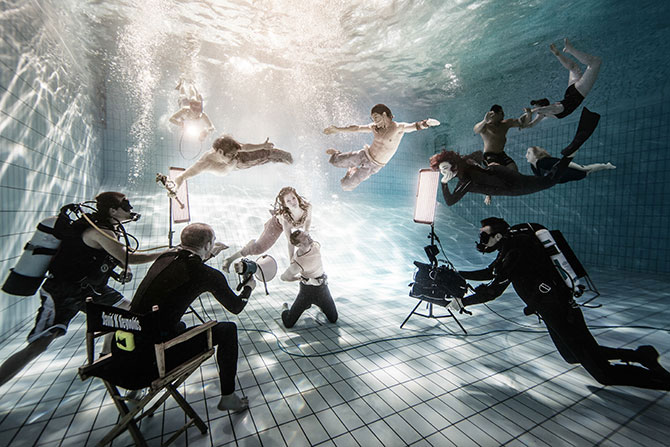 That can certainly be said of Von Wong’s photograph for The Underwater Realm, an independent series of short films depicting human encounters with the people of Atlantis. The photo, shot at the bottom of a pool, depicts an underwater production crew filming the actors. “It looks behind-the-scenes, but that’s actually the shot,” Von Wong says. “I think that’s the new way to advertise and push things out there. To generate engagement and interaction is more important than slapping things in people’s faces. They turn off as soon as they see it’s an ad. You have to create something compelling, engaging, exciting, that will get people to talk.”

Getting people to talk is hardly a worry for Von Wong, especially when it comes to his no-reservations attitude toward his personal work, whether it’s an image of a three-headed ghost under black light, or a motorcyclist engulfed in flames mid-wheelie, or “A Tale of Benjen Stark,” a Game of Thrones fan-fiction video. 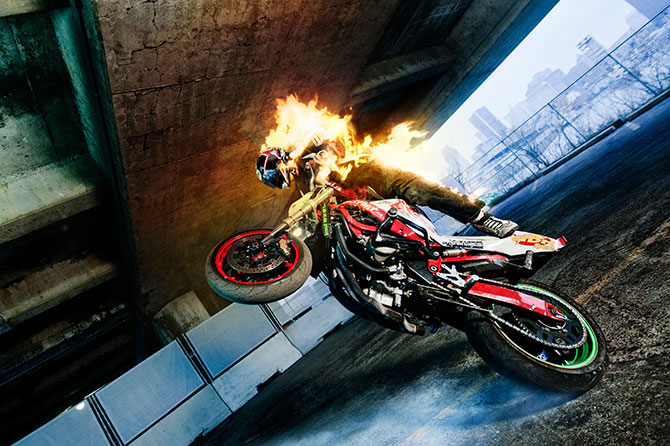 It’s this mix of commercial and creative that’s led Von Wong to increasingly greater things. A trip to Israel this spring saw him and a few other photographers documenting extreme sports athletes performing stunts around some of the country’s most important historical landmarks on behalf of Kinetis, a non-profit organization aimed at changing cultural perceptions about the country. Von Wong came up with the concept for the shoot: “It’s clashing extremes. If you can take traditional and mix it with new age, that’s where you get something exciting,” he explains.

And there’s no shortage of excitement ahead for him. In May, Broncolor, maker of high-end professional photography lighting systems, announced its new GenNEXT program to connect with a younger audience. For a year, Von Wong and four other photographers under the age of 30 will use Broncolor equipment to produce creative photos and blog about their experiences through posts, reviews and videos — all things Von Wong already does, but on a grander scale. “It’s a really fun spin [on marketing], with a company that sees the value of crazy, new-generation stuff,” he says.

“My life is planned around the next big thing. I can go anywhere. The crazier the project, the better it is,” he continues. “If someone says it’s impossible, well, then that’s what I want to do.”

Split Run is a feature that uses the power of both print and the Internet. Featuring an original image-maker who does both stills and motion work, the portfolio appears in Applied Arts magazine and online. Pick up the Jul/Aug 2014 issue of Applied Arts to see the print portfolio of Benjamin Von Wong.