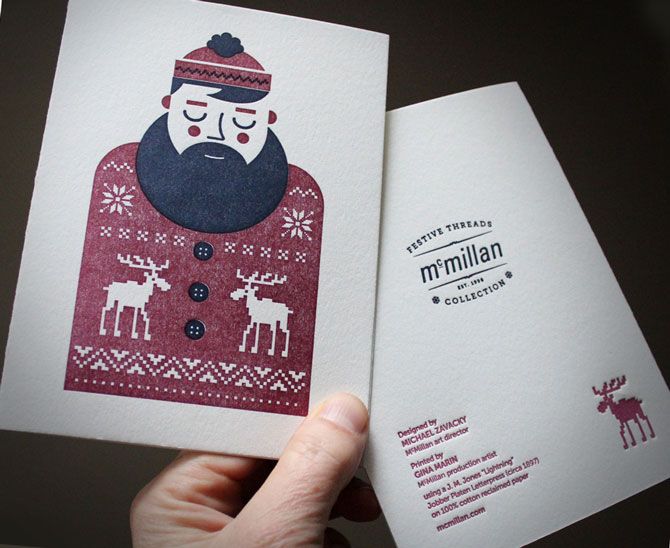 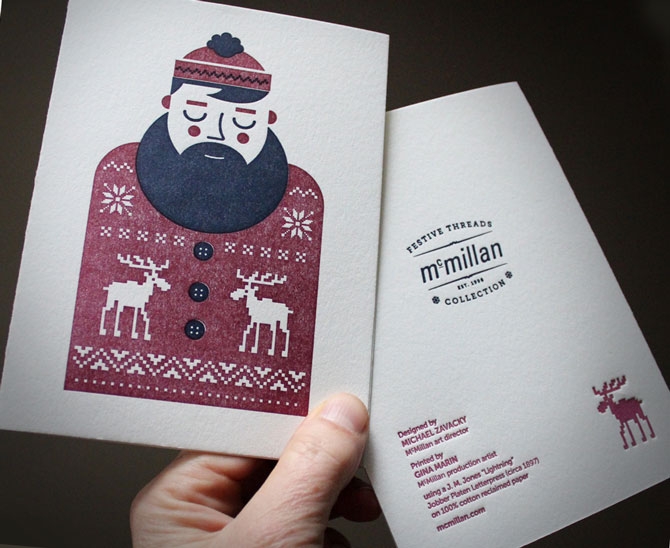 The “Festive Threads” letterpress greeting cards will be sent to clients and sold to raise money for the Ottawa Mission shelter (last year’s set pulled in over $1,000). It’s the fourth year in a row that McMillan has produced its holiday cards in-house — the 2013 “McMillan Christmas CARds” collection won both an Applied Arts Illustration Award and an Applied Arts Design Award earlier this year.

The story behind the “Festive Threads” set is full of heartwarming holiday cheer. Last year, McMillan art director Michael Zavacky received a special Christmas gift from his mother: an old sweater of his father’s that she’d knitted in the 1960s and only recently re-discovered.

“I do recall her working so hard on that sweater and my father wearing it with pride,” Zavacky says. “I absolutely love the naïve Canadiana folk art design and craftsmanship, and decided to base my illustrations on a series of sweaters like this.”

He and his colleagues decided to model the characters after McMillan staff members (and one staff member’s dog), assigning each sweater with beavers, moose, hockey players and maple leafs — those classic symbols of the Great White North. 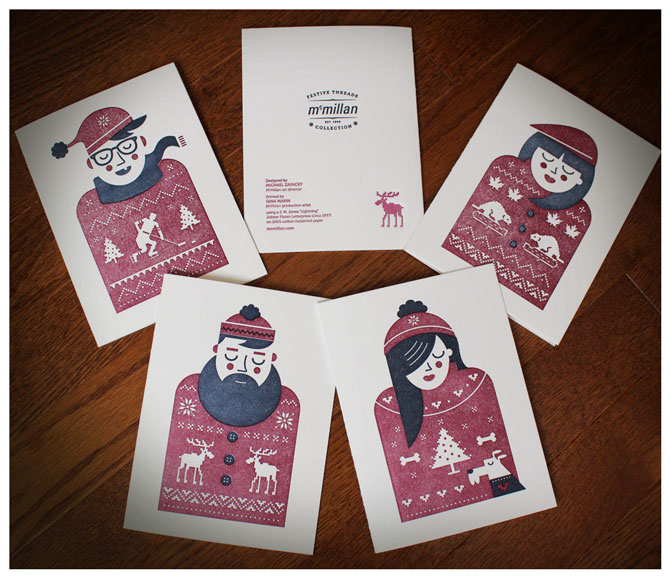 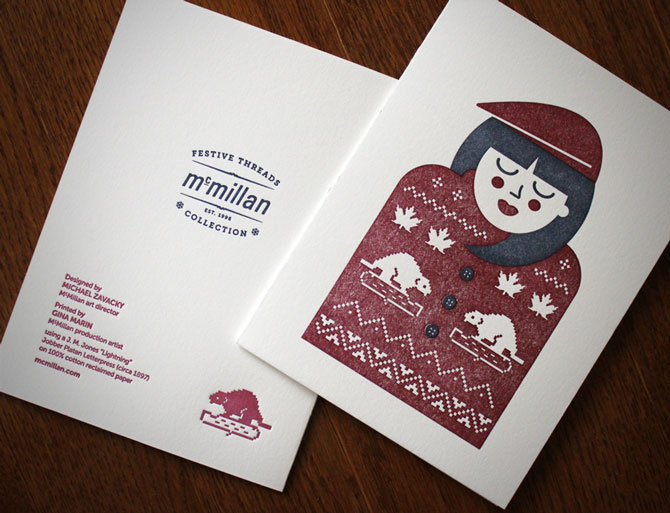 “To ensure that holiday, handcrafted, handmade feel, I decided that these cards would not be printed digitally or offset — we would have to go letterpress,” explains Zavacky. “It’s nice and therapeutic to get off the computer and make something with your hands, old-school style.” 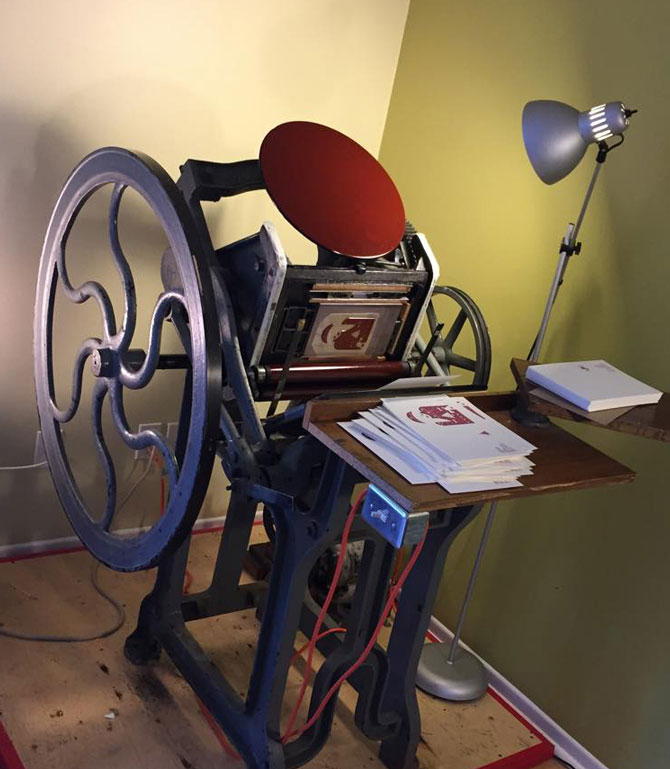 “It was a big project getting the art and plates made, ordering the proper paper, ink and then printing over 1,000 two-colour cards and getting them shipped out to clients on time,” Zavacky says.

Right before the final batch of cards, Marin’s printer broke down. A few calls later and Stephen Quick of Weathervane Press helped the McMillan team finish the project.

As for that relic printer? Says Zavacky, “[It’s] currently in the repair shop and with a bit of luck from the letterpress Santa, we hope it have it up and running in the New Year.” 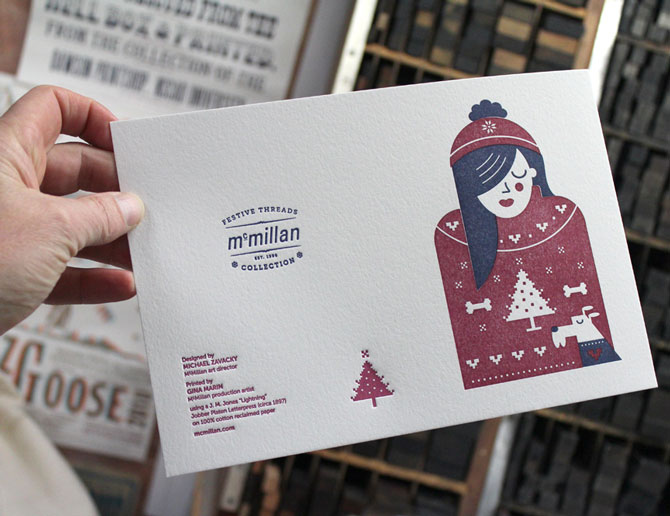 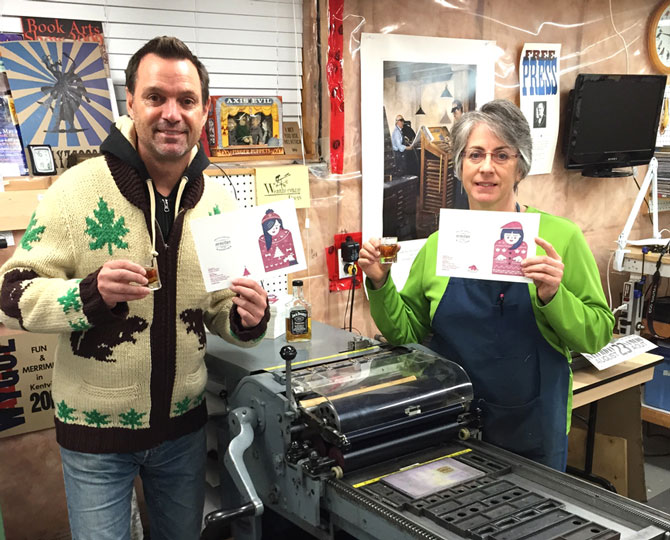