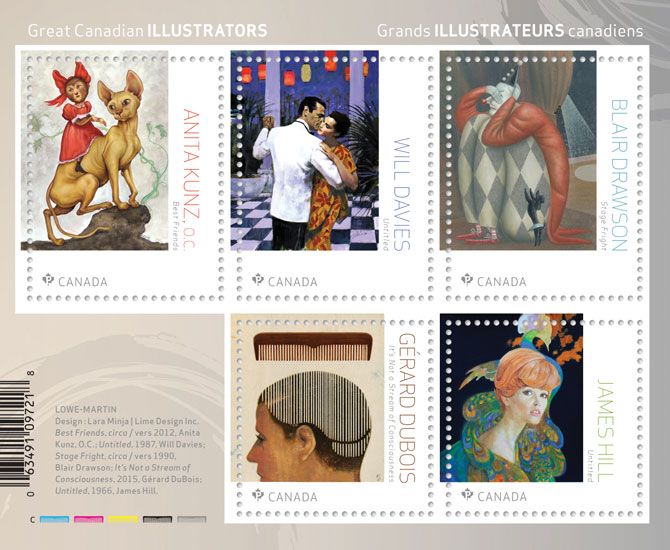 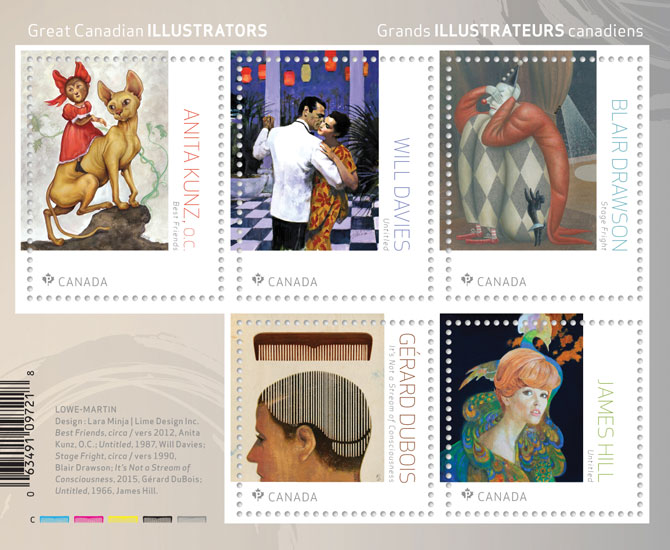 The stamps, which were released in April, each feature a single, high-impact past work by Anita Kunz, Blair Drawson, Gérard DuBois, James Hill (d. 2004), and Will Davies (d. 2016).

“I was really excited about this project because I love working with illustrators,” says Minja. “I love the possibilities of illustration in terms of marrying concepts with anything you can do.”

Over the course of a year, Canada Post selected the illustrators to be featured and went back and forth with Minja on the final details.

“One of the challenges of working with someone’s illustration in this context is you don’t want to manipulate it, and that has some bearing on what you can do with the stamp design,” Minja says. “I wanted to feature the illustrations as large as possible in a very consistent way.”

That led to producing three stamps at a larger vertical size and two others in a square format, so that Minja could feature all of the chosen works without cropping. She endeavoured to include the artist names prominently. “Illustrators, designers and photographers often go unknown. So this was an opportunity to highlight the creators,” she says.

Blair Drawson, one of the illustrators featured in the series, says Canada Post initially approached him to submit three pieces for consideration before they selected the final, “Stage Fright,” which he drew for a magazine in 1990. “The theme was shyness,” Drawson recalls. “I chose a clown—a personage representative of extroversion—who would suffer particularly if fearful. The little dog, his partner, is simply declaring, ‘The show must go on!’” 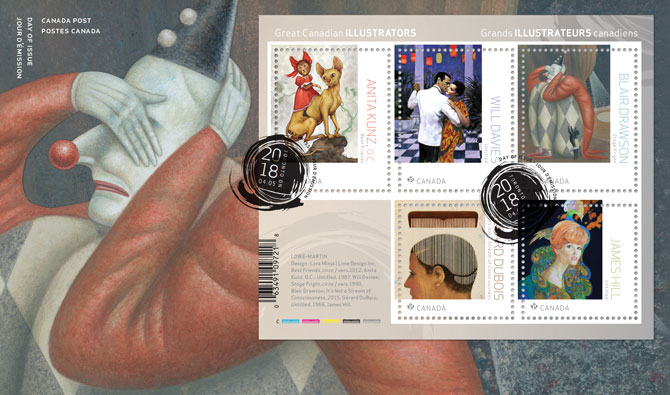 Minja picked Drawson’s piece to appear on the Official First Day Cover. “It’s dynamic in that format. The tonal range is complementary to everyone else’s work,” she says. She selected the Gérard DuBois image for the stamp booklet. “I find it intriguing and I love the cropping of it,” she says. “I hope it captures people’s attention because it’s different.”

She developed a hand-drawn element that appears on the interior of the stamp booklet and on the souvenir sheet. “I tried to come up with something complementary to the artwork that wouldn’t be overpowering, with a subtlety of background colours,” she explains.

The stamps were printed in CMYK with silver, and Minja says some work was required on the Lowe-Martin press to achieve proper colour balance, and to cut the stamps with the correct amount of bleed.

Drawson says he’s pleased that the stamp series represents Canada’s diversity in art. “The pieces selected for the stamp series are quite varied in tone, technique and subject matter,” he says. “It is a great honour to have one’s illustration chosen for a national stamp. I got messages from artists in the UK and USA that pointed out how virtually impossible it would be for a living artist to have their work commemorated in such a manner in their country. It speaks well for Canada that such a thing was possible here.”