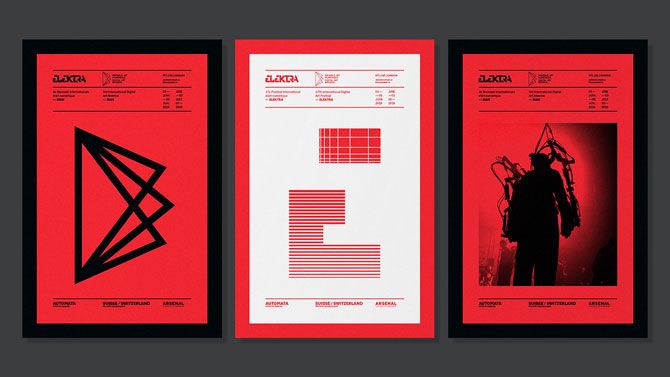 Elektra, Montreal’s annual digital arts festival, has a long-standing commitment to poppy visuals for its event collateral, and this year was no different. This year, Elektra ran concurrently with the third International Digital Art Biennial (BIAN), all under the theme AUTOMATA, or art made by machines for machines.

Baillat studio undertook the print and web visuals for the double-pronged festival, inspired by the main exhibition work Inferno by digital artists Bill Vorn and Louis-Philippe Demers, an interactive piece that renders participants’ arms useless to the beat of techno music. “For me personally, this was probably the best digital art exhibition I’ve ever seen,” says Baillat founder Jean-Sébastien Baillat. “This main piece was so striking visually that I knew we had to build around it.” 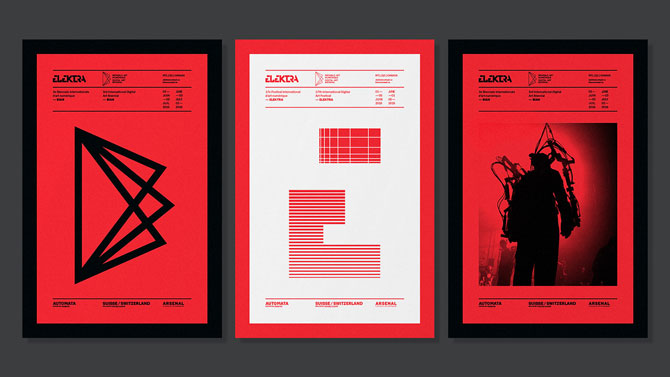 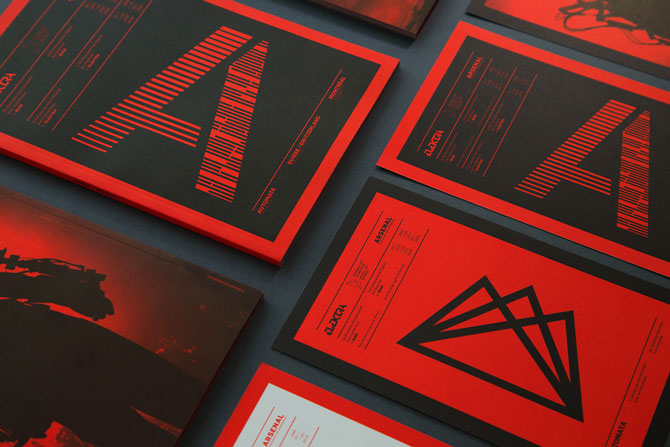 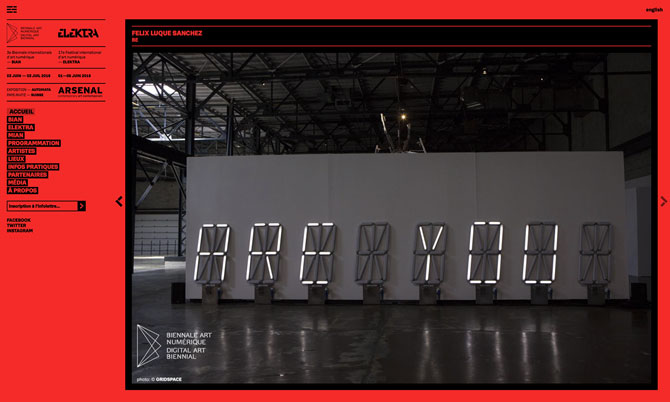 Three poster concepts use a powerful red-and-black palette and call to mind Dante’s circles of hell. “We built patterns and presented them through the letters A (for automata), B (for biennial) and E (for Elektra), along with pictures of the Inferno installation,” he continues. 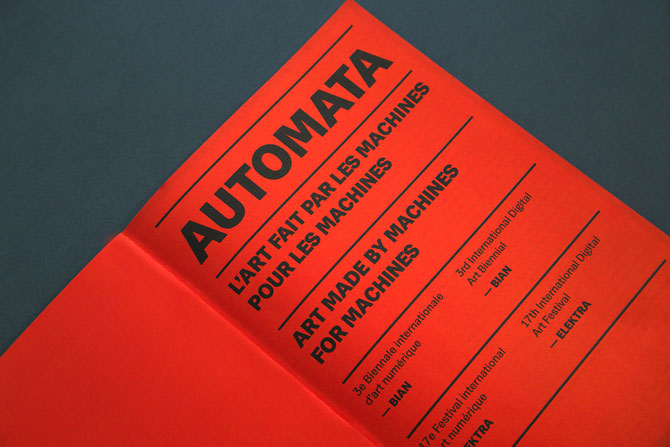 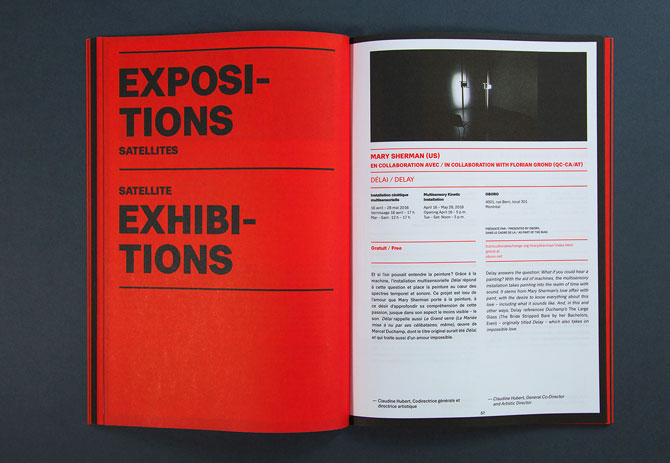 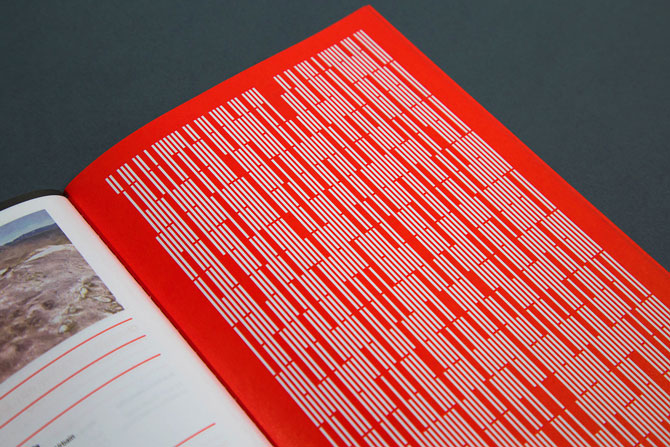 Two video executions echo the robotic, graphic look of the posters. Baillat says he always tries to incorporate an element of movement in client work after initially studying cinema. “Twenty years ago I fell in love with the electronic music scene—there was this famous club in Montreal called Soma, and they had this visual identity where the patterns related to the logo and to the music. It was a blast for me. That’s why I started graphic design,” he says. “Elektra is close to my DNA because of my interest in digital arts and music. And that’s what led me to Red Bull Music Academy, because they do work in that space, too.”

When Red Bull Music Academy (RBMA), a global network of lectures, workshops and festivals centred around music, descended on Montreal earlier this year, Baillat studio was tasked with the monumental campaign for the event.

For five months, the studio worked on more than 60 pieces of collateral for RBMA, including wild postings, transit takeovers, programs and souvenir booklets and social executions celebrating Canadian and international music culture. The 70 participants of RBMA Montreal had to apply to be part of the weekend-long event at the Phi Centre, held September 26 through 28, where they were able to sit in on talks and collaborate on music. It was the first time the RBMA rolled through Montreal, having previously been set in places such as New York, Paris and Berlin.

“RBMA is about creativity, collaboration and sharing things together,” Baillat notes. “For this campaign, we had to find the voice for Montreal. So we came up with an approach that was ‘between grid and gritty’—there are lots of gallery artists doing great, clean work in the city, nice typography, that kind of thing. But then Montreal also has this grittiness. There used to be brothels; we have a history with disco music.”

To illustrate the theme, Baillat produced more than two dozen posters for the shows, and also turned them into animated GIFs.

“The typography is all well placed and precise,” Baillat says. “But for the visuals—we tore them to add to that grittiness. The intention at the beginning was to make it look real, but it became complicated. The physical tearing wasn’t really working, so we went with a digital tearing look. With that, we’re expressing something about discovery.”

The disparate content of each of the posters speaks to the varying music heard throughout the festival, from pop to jazz to metal to funk. “We usually like to keep everything quite similar. This is something for a designer, to do something very different [in the same campaign], and we were a bit afraid at first!” says Baillat.

The unifying element ended up being that tearing effect. “While the posters all look quite different, it somehow fits together,” he says. 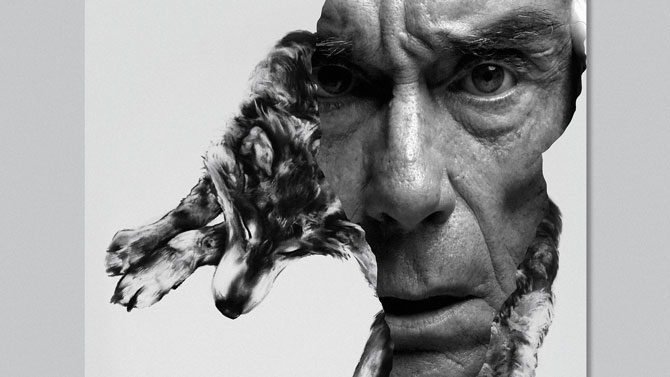 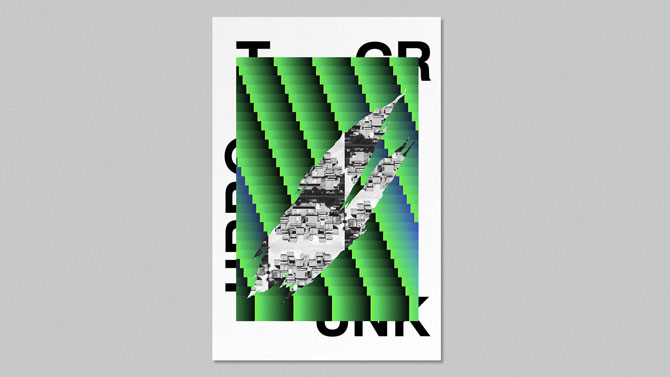 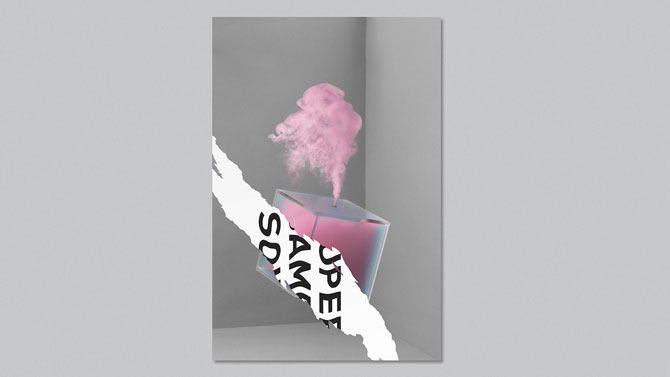 The look was extended throughout the RBMA space itself, transformed by architect Zébulon Perron, who regularly designs restaurant and bar interiors. “It was a fitting collaboration because while the Academy is a place to share, bars are places where people meet,” Baillat says. 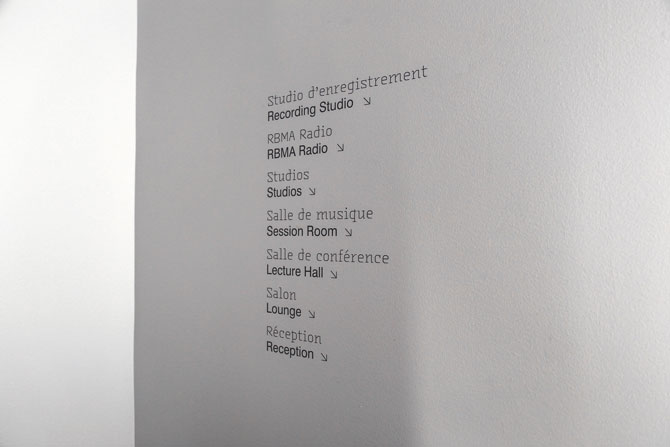 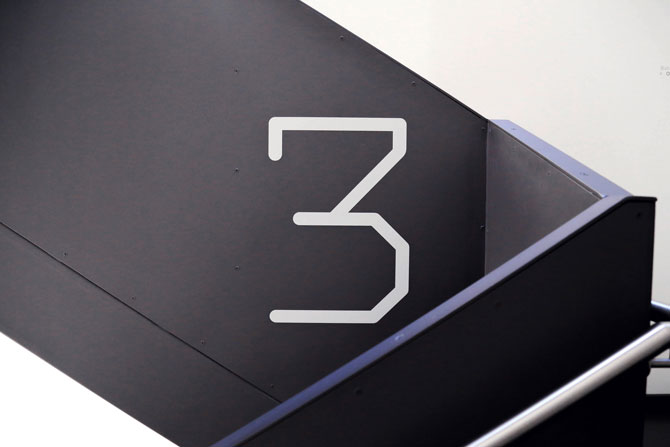 Wild postings and the transit takeover at Place-des-Arts metro station rounded out the public face of the festival. “This is not a commercial campaign,” Baillat notes. “The clients sees it as more editorial—they’re telling people what they are doing, but with heart and creativity. So they chose very carefully every one of their collaborators.” 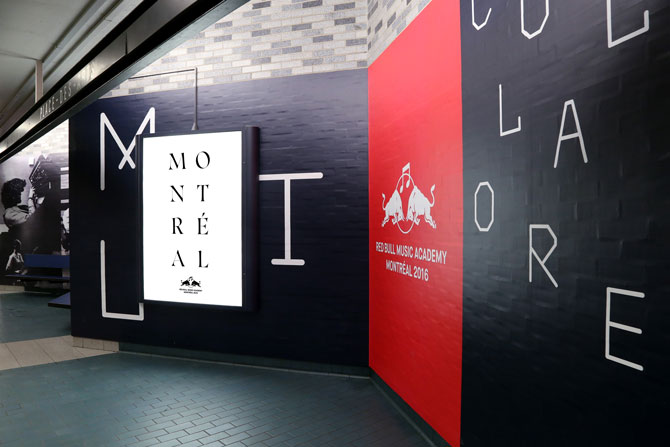 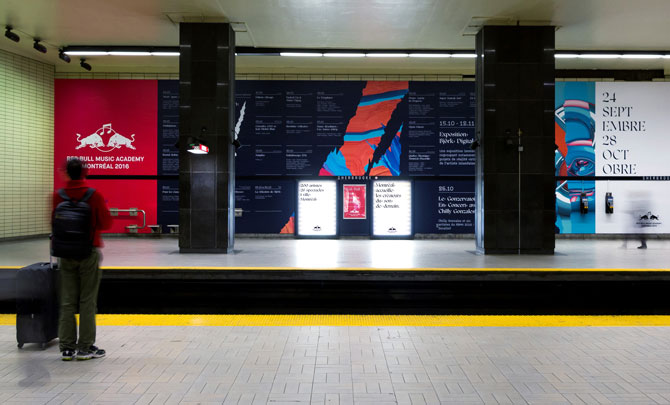 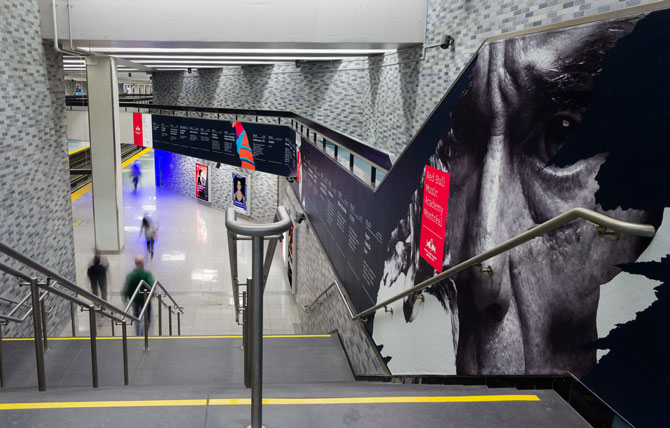 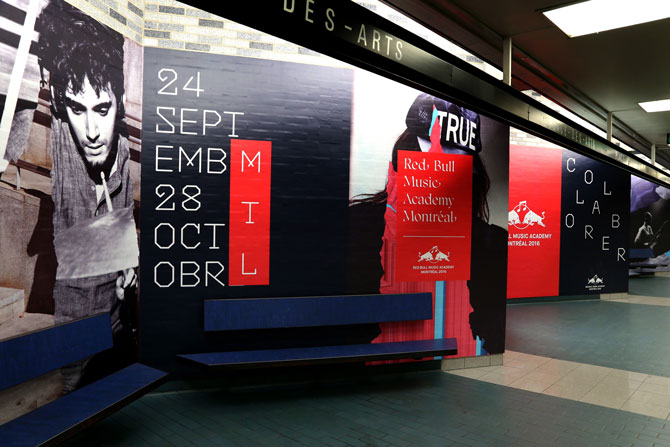 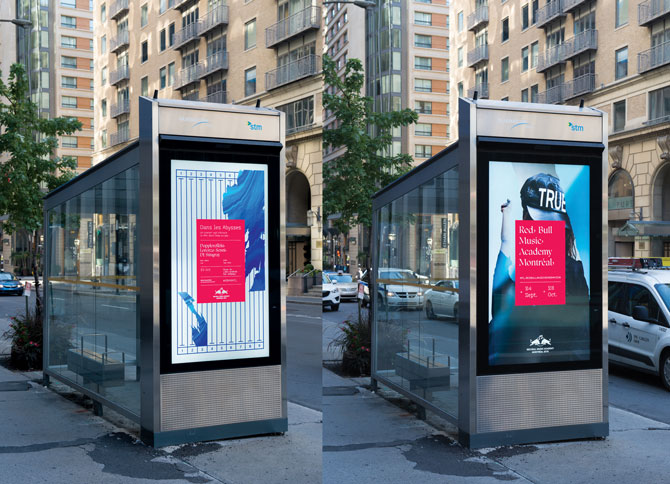 Atypical of a client, RBMA was open to the print collateral for the event to be singular from the show visuals. “They said we don’t need to feel forced to represent the campaign,” Baillat says. “What we created fits with the campaign but is able to stand as a whole piece on its own. The brief was to take the campaign collateral and do something even more artsy.”

The studio produced nine print pieces for the participants and media attending the RBMA festival weekend, with the key visual being a piece called “No Man’s Land” by Montreal-based graphic designer and digital artist Aaron Kaufman. Two large participant books feature words of welcome, information about the Academy, and elements of the campaign. “The cover is shortened so it gives a rhythm to the document,” Baillat explains. A slightly smaller art book featuring artist works and bios is topped with a torn holographic foil, and a turnable wheel chart with information on artists nestles into a sleeve to resemble a seven-inch vinyl record.

Baillat. also created an art map for an art exhibition in the RBMA headquarters at the Phi Centre, and a city guide for the 80-strong international RBMA team.

“The best part about this project was the client cared about who they were working with,” Baillat says. “They want those close relationships, so they avoid big companies. They want to speak personally all the time. It was really inspiring.” 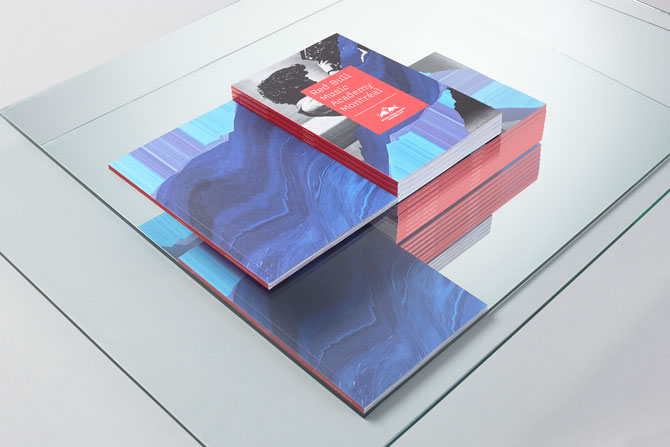 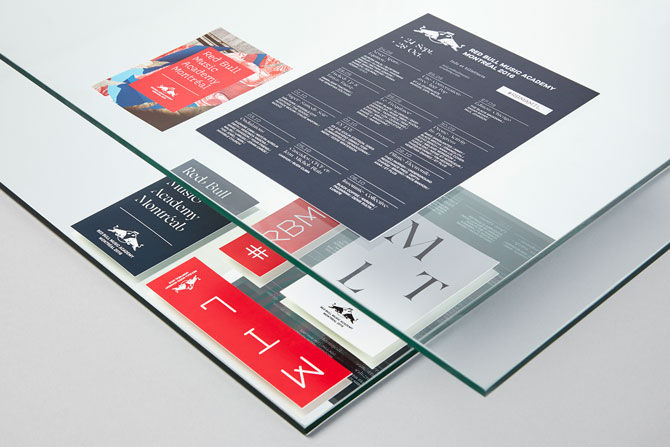 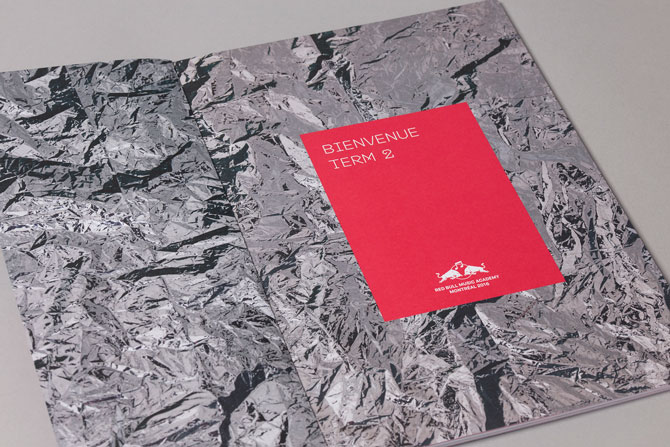 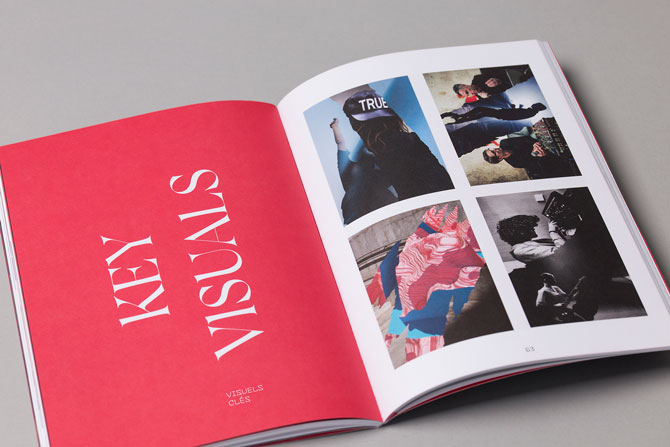 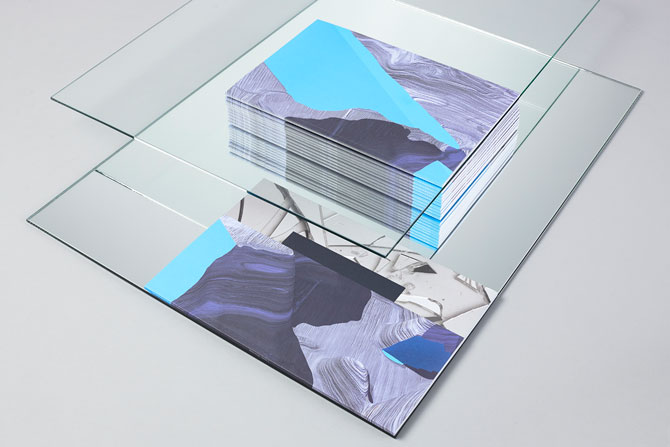