The Artist as Outlaw 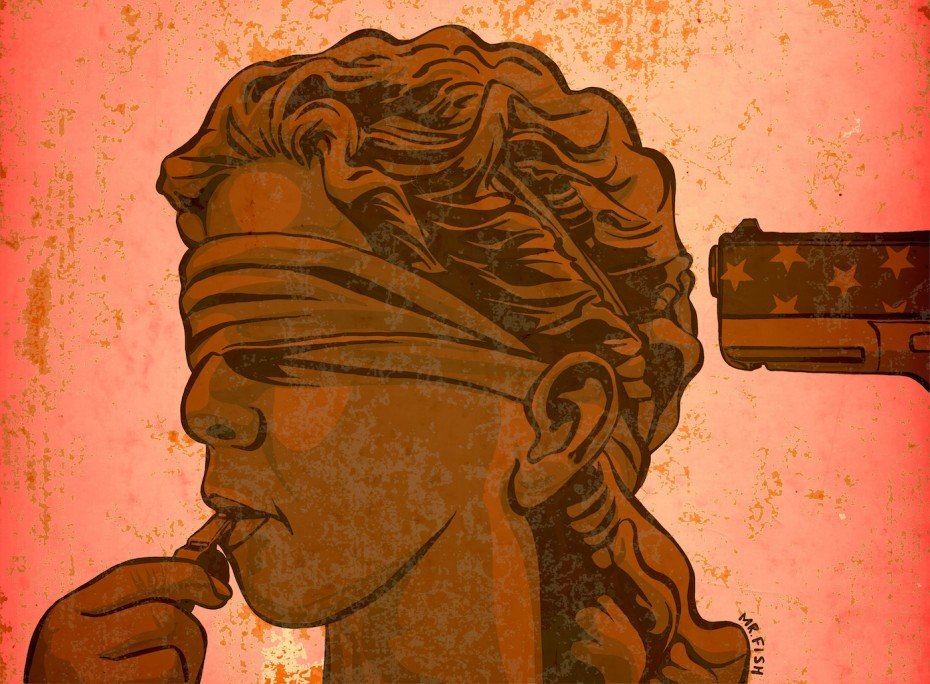 It’s tough enough to make a living as a commercial illustrator. For a political cartoonist with an uncompromising commitment to speak truth to power, it’s nearly impossible.

I first came across the work of Dwayne Booth, aka Mr. Fish, while reading a recent column by the American journalist, activist and social critic Chris Hedges. The column, which was about the threats faced by corporate and government whistleblowers, is accompanied by the image above.

Hedges, who for almost 20 years covered wars in the middle east, the Balkans and Latin America as a Pulitzer prize-winning foreign correspondent for the New York Times, is a leading example of what happens to those who dare to speak truth to power. The wages of doing so are constant surveillance, professional marginalization, unemployment, prison time, and if you’re considered enough of a threat, death.

Hedges continues to experience the first three of those punishments. Other prominent voices who have suffered similar fates include Noam Chomsky and Cornel West. Voices like Julian Assange are looking at life in prison. And as we saw with Washington Post journalist Jamal Khashoggi, if you push power hard enough, you’ll face death and dismemberment.

Mr. Fish has tasted the lash of mainstream disapproval for his biting critique of American culture and politics, and in this sense he is the perfect choice to illustrate Hedges’ weekly Substack articles and podcasts. In a documentary film on the artist, made by Pablo Bryant, Mr. Fish makes his intentions clear: “I want cartooning to be dangerous. And I want it to be something more than just on paper. The problem for me is there’s no longer any place to do this.” 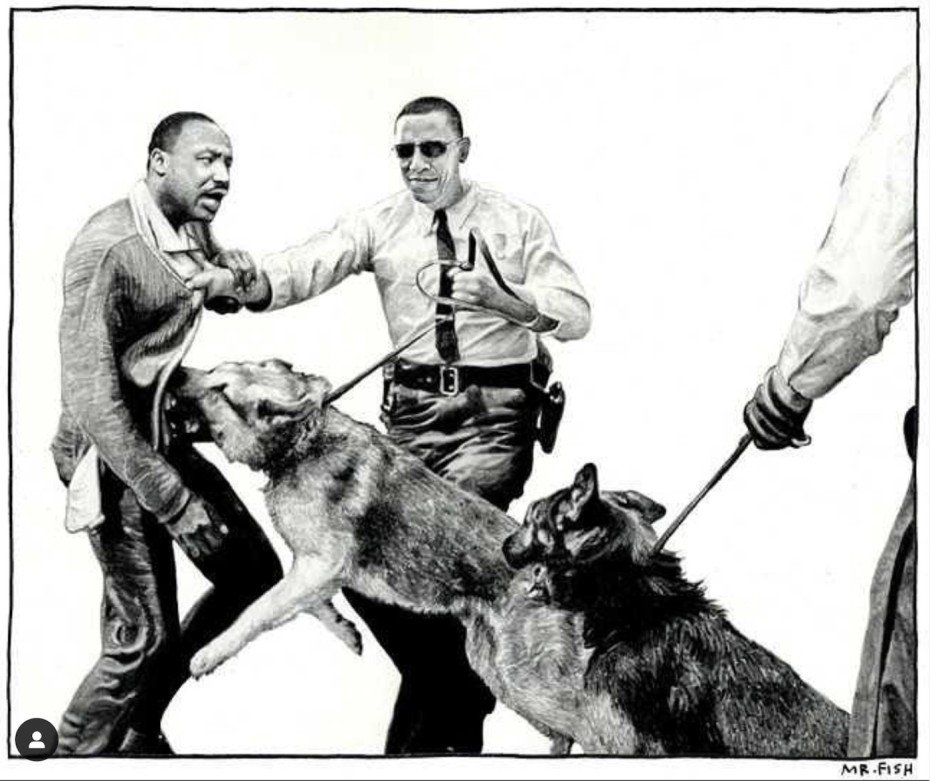 The image that launched a thousand nasty letters. This is Mr. Fish’s comment on the opinion, shared by Chris Hedges, that some of Obama’s policies were harder on civil liberties than those of George W. Bush. Espionage Act, anyone? Image courtesy Mr. Fish.

Mr. Fish pulls absolutely no punches. When questioned in the film about a particularly disturbing image of President Obama published by Harper’s magazine around the time the Martin Luther King monument was unveiled in Washington DC, he had this to say: “Do I want my art to be a threat to the dominant culture? Yes. I knew that there were rumblings about not saying anything negative about Obama. The cartoon I did got a lot of angry letters. The upper echelon at Harper's came down on my editor, saying next time we should be more sensitive to what's happening in the news before we run a cartoon like this and I wrote back, you're exactly wrong. Their policies do not have anything to do with each other. The only thing they share is the fact that they're both African Americans, that's it. And you do it on a day when the spotlight is on both those guys, and then you have an educated conversation about what all this means. When they let me know that they were discontinuing me, I was getting the most hits on the site. But the politics just got (to be) way too much.”

Mr. Fish deploys a wide variety of graphic styles to get his point across, from stick-man cartoons to realistic representation. Here, some of his comments on racism. All images courtesy Mr. Fish

This has been the story of Booth’s professional life. He is very fortunately married to a woman who is heroically supportive and respectful of his refusal to compromise, whatever the material costs. There is a very difficult conversation in the Bryant film where she struggles with the tension between supporting Booth’s unwillingness to compromise and shouldering the family’s mounting debts. He relents and takes a ‘day job’ doing merchandising signs at a Whole Foods store. After a year, he gets laid off, and the cycle begins again.

In another scene in the film, Booth is on a roundtable with other artists discussing the demise of newspapers and political cartoonists. Says Booth: “Newspapers are dying and there's no staff positions that are going to enable people to actually support themselves and have a family. It's the great return of the starving artist.”

His sentiments are echoed by another cartoonist at the table: “It's not a dying profession. It’s a profession that is being systematically murdered, like baby seals being clubbed to death. There are sites that can afford to run cartoons and should have them because of the kind of content that they publish. I mean, Salon, Slate, Huffington Post. These are big audiences, big budgets. They have staff writers. They're not hiring any cartoonists or running any cartoons at all. Even when they're the most popular feature in a publication, they still eliminate them. So it's not a money thing. It's political.”

If one of Mr. Fish’s trademarks is a multiplicity of styles, another is his use of rambling cutlines that add irony, gravitas and context to the humour of the imagery. All images courtesy Mr. Fish.

Since no taboo is too taboo for this artist, you can expect to see a lot of very graphic content. Depictions of the penis loom large over the corpus of Booth’s oeuvre, used as a symbol of both toxic hypermasculinity and masculine impotence and insecurity. And there’s no one he likes to compare to a dick more than Donald Trump. 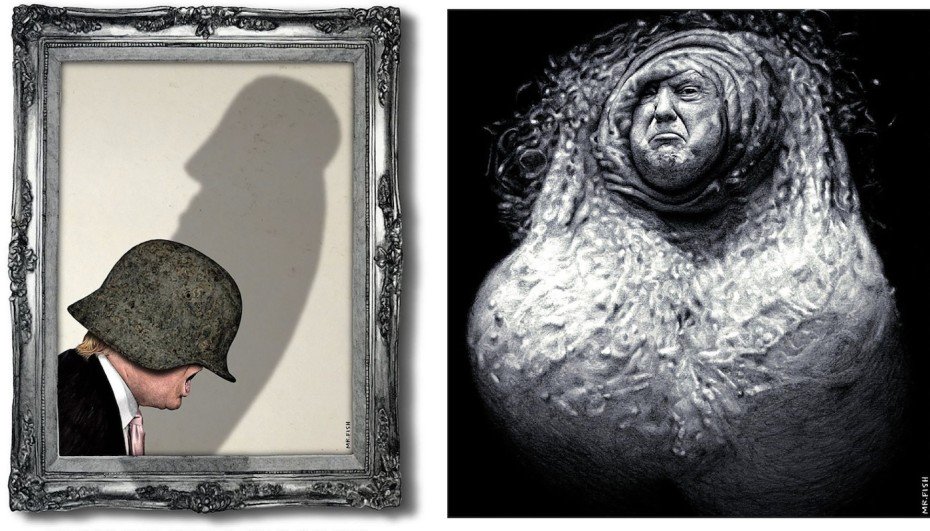 As one of his peers says in the film: “When I think of Mr. Fish, I think he's one of those people who said, no, I'm not going to sell out. You can't buy him. He's a throwback to Lenny Bruce or John Lennon who both said, wait a minute, this is wrong and I'm gonna call it out.” Long live Mr. Fish! 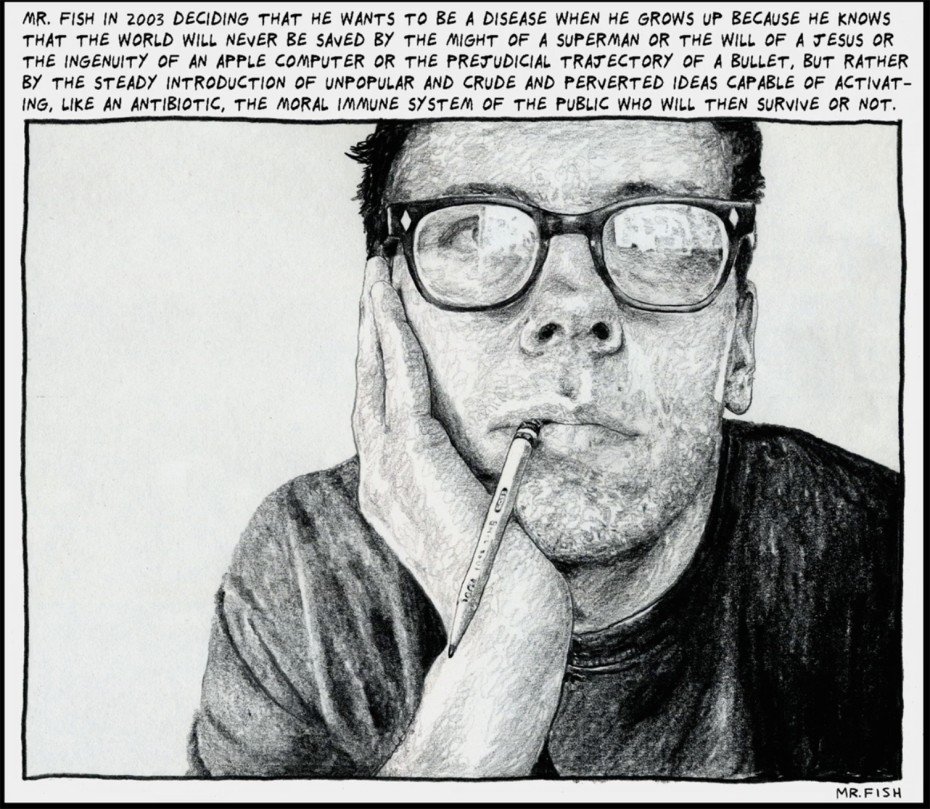