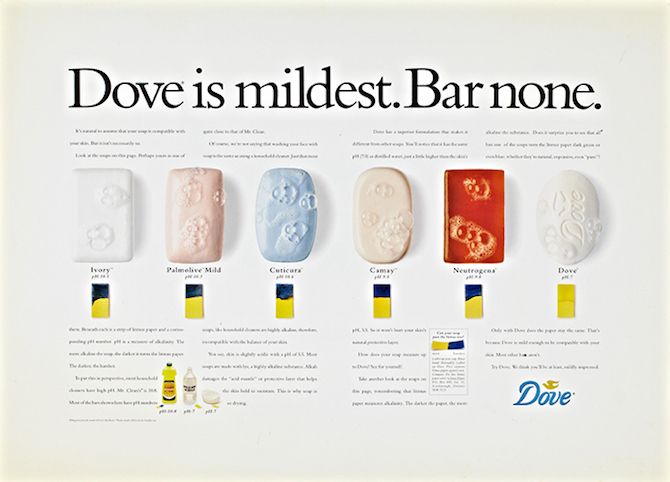 Every once in a rare while you hear a brand story that is actually based on an empirical truth which, when carefully told, turns out to be far more effective than any of the fantasies conjured up by ad people to sell you whatever it is they are selling. 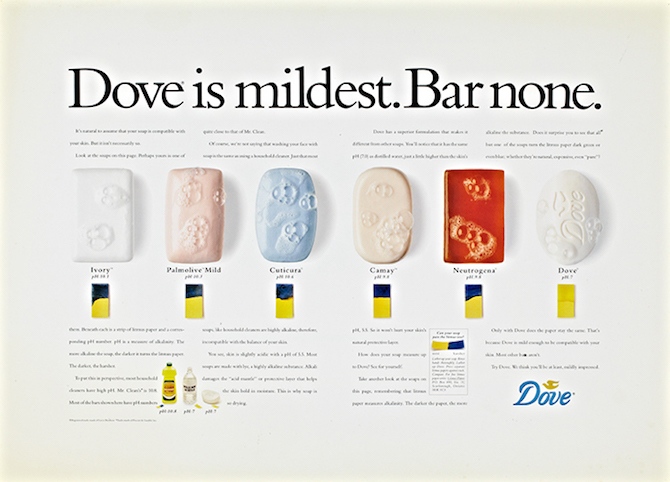 I had a chance to speak with Nancy Vonk who, along with Janet Kestin, is known for the ground-breaking work they did on the Dove brand in the 90s and noughties. We were talking about one ad in particular, in which the headline is “Dove is Mildest. Bar None.” It was the very first campaign in which Vonk and Kestin had worked together, and it was with the then new brand director for Dove, Peter Elwood. Elwood was facing two potential threats: the Dove patent was coming due, and for the first time in its history, there were challengers ready to claim a similar formulation. Elwood needed a different approach and a different story to keep the brand alive.

With an eagerness to learn everything they could about the product formulation, Vonk and Kestin made a significant discovery?Dove was technically not a soap like any other. Its formulation was based on a World War II technology used to develop a much milder soap that could be used on burn wounds. It had to be a soap that did not strip any oils form the skin.

For 35 years, Dove had relied on testimonials by customers who were only too happy to say how much they liked the product. Many similar products used the old “my husband just loves how soft Product X leaves my skin." But Vonk and Kestin thought it was time to speak to women in a more contemporary way, one which recognized their intelligence and their ability to judge products on their own merit.

They learned from the client that one way to demonstrate that Dove really was different was with a litmus test. If the formulation had a neutral Ph balance, the litmus paper would not change colour. But if the soap’s Ph was too alkaline, the paper would turn blue. What you see in the ad is evidence that the only soap with a neutral Ph balance was always Dove. When they found out that Mr. Clean had the same Ph as most soaps, they turned that to their advantage too.

They also hit on the idea of inviting customers to write in (this was 1991, folks) for a sample of the soap and a piece of litmus paper for them to do the test themselves. That massively increased sales around the world. The campaign was deployed in 33 countries, and put Vonk, Kestin and Elwood on the global map. Not to mention it cleaned up at Cannes, CA, the One Show and everywhere else.

As Vonk pointed out to me, this may never had worked had they been in New York and not Toronto. Elwood got a lot of flack from Lever’s head office for taking a chance on an idea that was totally against the tried and true testimonial approach of the previous 45 years. But, faced with watching the brand decline, Elwood drew a line in the sand and said “we’re going to do it our way.” Because it was Canada, the brass at Lever probably thought the market was small and insignificant enough to take the risk. So what if it didn’t work? It’s only Canada.

If you are Canadian, this is where you smile. If you are in Canadian advertising, you owe a lot to Vonk and Kestin.