A post-colonial reimagining of the role of typography 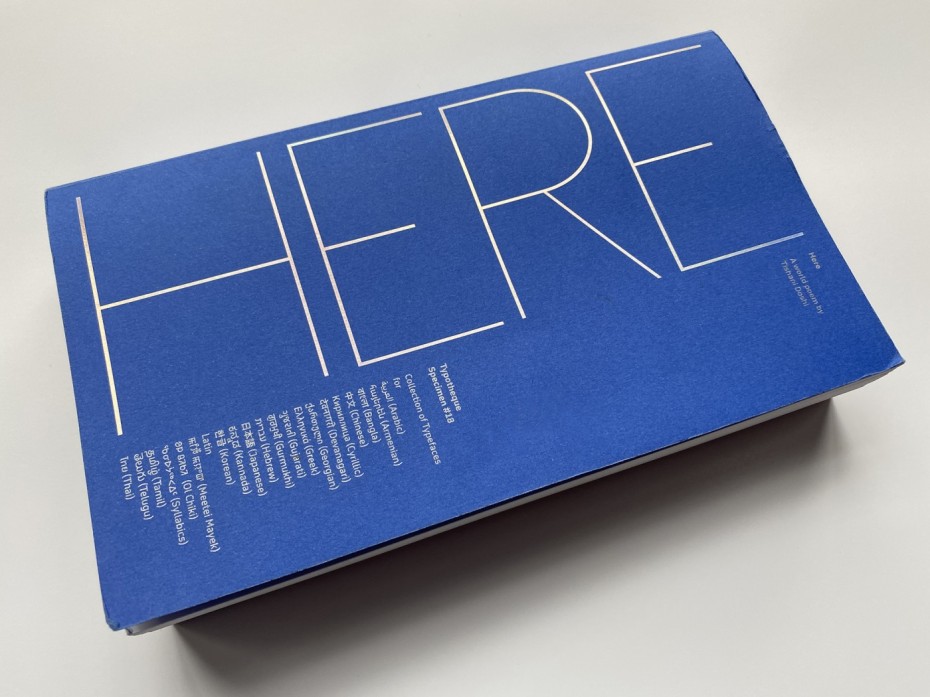 Cover of Typotheque’s Specimen #18, a 560-page tome of verbal and visual poetry in 21 different scripts and 162 languages.

Latin is probably the world’s most ubiquitous script. It is employed by hundreds of languages. It is not only used by European languages such as English, French, Spanish, Portuguese, German, Polish, Hungarian, Turkish, Czech and Slovak, but has also been adopted by writers of Vietnamese, Kurdish, Somali, Uzbek, Zulu, Navajo, Indonesian and Swahili, to name but a few. We have colonialism to thank for making it the orthography of conquest, as Europeans decimated one culture after another in their quest for world domination.

Even as western cultures are now slowly awakening to the injustices resulting from 600 years of colonization, colonial domination and oppression continue in both their historical and more advanced forms. For examples of the former, look to Canada’s continuing oppression of its own first nations, Israel’s genocidal treatment of the Palestinians, or Brazil’s decimation of Indigenous tribes of the Amazon.

In its more advanced form, colonialism has metastasized into the cancer of globalized capitalism. Whether we’re talking about Christopher Columbus or Jair Bolsonaro, the process has remained the same: conquerors and their investors come face to face with indigenous cultures and then set about the task of driving them to extinction as they pursue their hegemonic agenda.

One of the casualties of this process is language. There are almost 7,000 of them spoken in the world today. According to typographer, writer and designer Peter Bil’ak, founder of Dutch type foundry Typotheque, roughly half of them are in danger of extinction. So he has set himself and his colleagues the task of slowing that process down by creating fonts for Indigenous languages and dialects so that they may live on in digital form and be made accessible to electronic communications devices. Many if not most of these endangered languages do not employ Latin script. 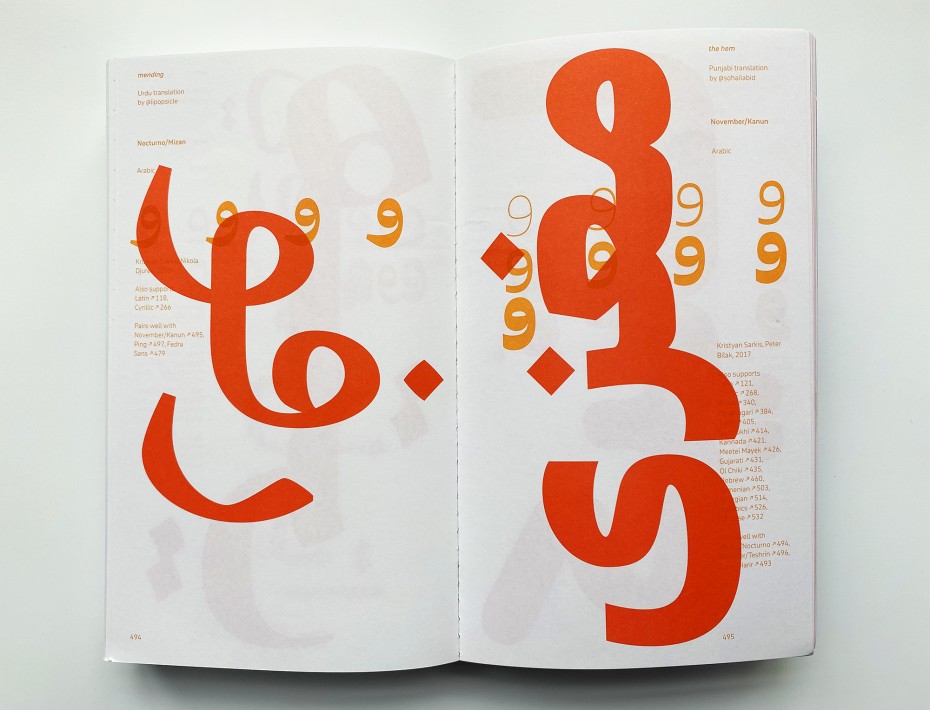 A specimen spread of Typotheque’s ‘Nocturno’ and ‘November’ typefaces, rendered here in Urdu and Punjabi.

To witness Typotheque’s heroic embrace of orthographic diversity, look no further than the firm’s latest type specimen book. Even at 560 pages, it is a much-reduced presentation of the 4,500 fonts that have emerged from this prolific foundry. As they say in the book, to have created a full display of every one of their fonts would have been an enormously slow, error-prone, repetitive and time-consuming task, so they had to figure out a way to give designers just a soupçon of each one. 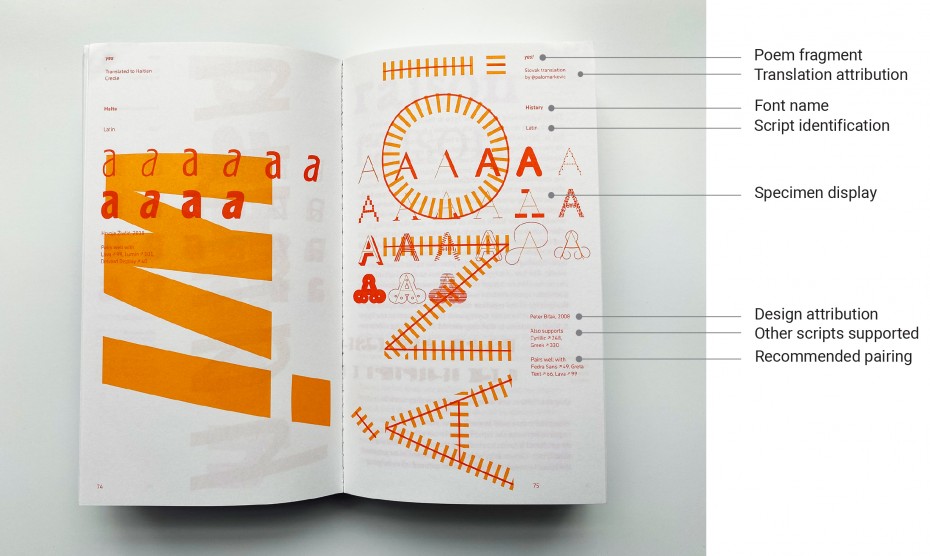 The word ‘yes’ translated into Haitian (left-hand page) and Slovak (right-hand page), along with explanatory metadata in the margins.

The concept and structure of the book were developed by Portugal-based Atelier Carvalho Bernau. Its ingenious conceptual anatomy, depicted above, warrants close attention. The typographic architecture of every specimen page hangs off one of the 500+ words of a ‘world poem’ entitled ‘Here’, written for the book by the multitalented Indian poet, dancer, and teacher Tishani Doshi. Each of these words sits at the top of the page and is translated into one of 162 different languages by native speakers throughout the book, whose contributions were crowdsourced via twitter. The translated versions of the words of the poem are what you see in the enlarged specimen display itself. Each page is annotated with metadata associated with the specimen on display. 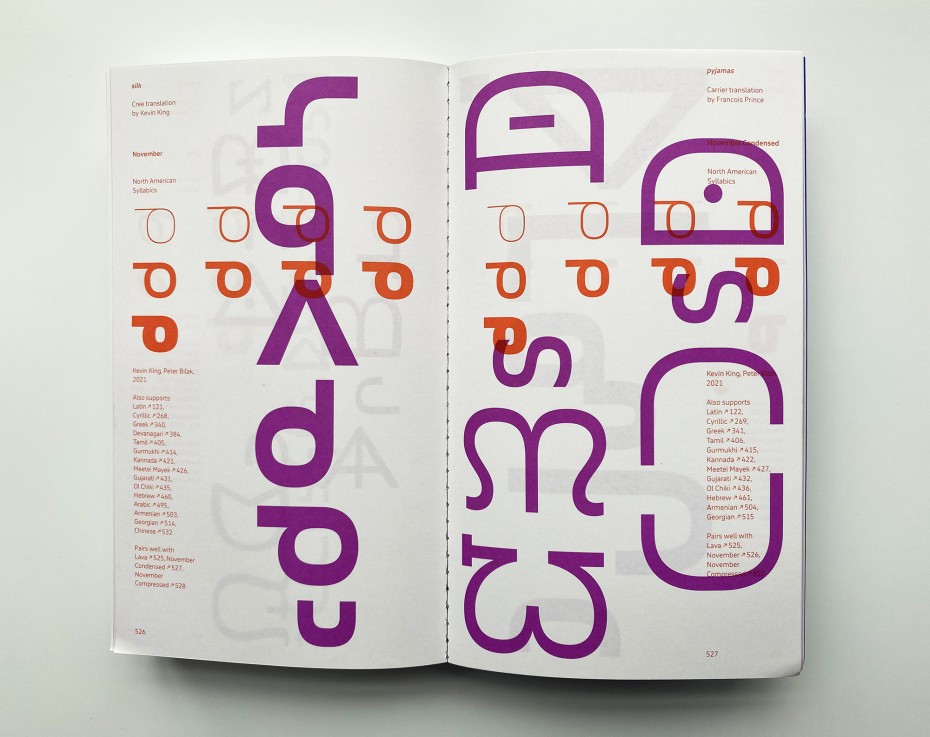 Type specimen pages are interspersed by essays on subjects of pertinence to the challenges of typographic design, ranging from contemporary reinterpretations of Bodoni types to a short history of sans serif to the challenges of designing in multiple scripts. Also included are several double-spread descriptions of non-Latin languages and scripts such as Telugu, depicted below. 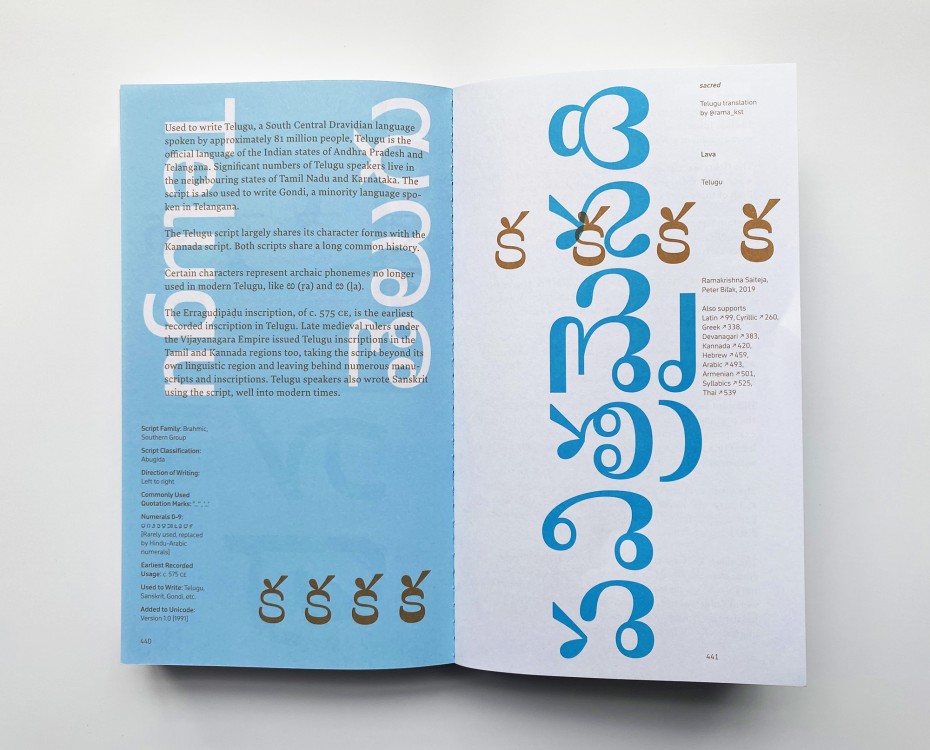 Short description of Telugu, a language spoken by the 81 million inhabitants of the Indian states of Andra Pradesh and Telangana. The specimen is rendered in the firm’s ‘Lava’ typeface.

The more you explore, the greater your sense of the scope of Typotheque’s ambition. The task of preventing the homogenizing forces of global commerce from destroying these vulnerable languages, as the authors admit, may not be of commercial interest, “but is an important step in preserving our planet’s cultural heritage.” As the authors remind us, purchasing the license to any of their more commercially popular typefaces helps fund the preservation of languages on the edge of extinction

As the narrative thread that ties the entire book together, Doshi’s poem (reproduced in full at the end of the book) echoes Typotheque’s ambition with a deep meditation on our hopes and fears in a world bent on self-destruction. As her words remind us:

Our vanished are gathered here –

mending the hem of our planet,

sewing beads into the atmosphere,

crocheting a net of pearls across the world.

If this should reach you, Dear Reader,

receive it with love,