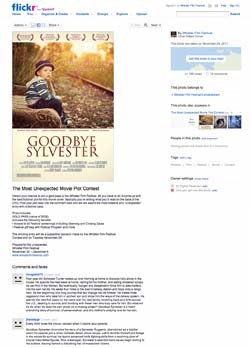 Leading up to the Whistler Film festival, a contest was created that used the Flickr comment field as the submission process. Several fictitious movie posters were posted on Whistler's Flickr site, and people were asked to write the most unexpected movie synopsis they could think of - and post it as a comment. The writers of the most original and unexpected stories were awarded gold all-access festival passes.