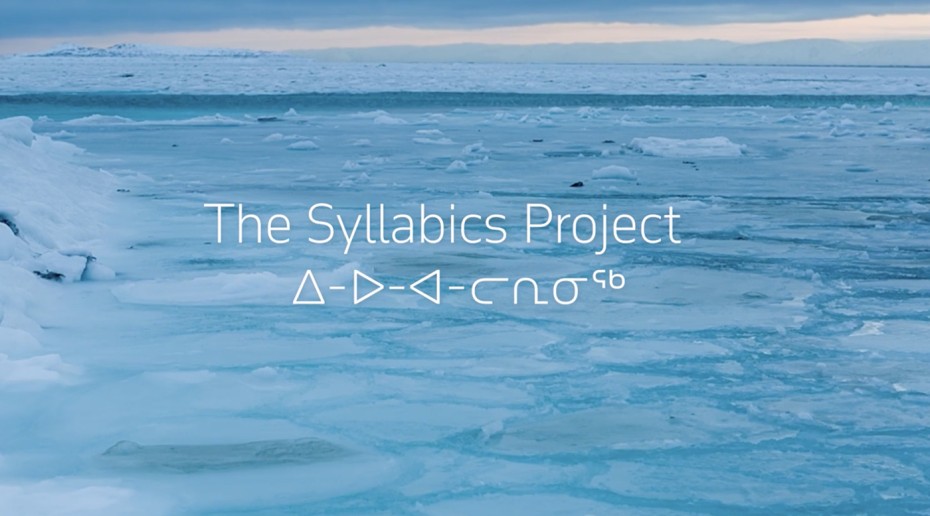 My last entry in this space celebrated the latest type specimen book from Dutch type foundry Typotheque. While the story focused on the ingenious design concept of the book, it also touched on Typotheque’s efforts to save local and indigenous languages from extinction.

Typotheque’s quest has most recently brought it to Canada, where it has developed digital fonts for the Nattilingmiutut dialect of Nunavut and the Dene dialect used by the Dakelh (Carrier) Nation of northern British Columbia.

The written forms of both languages are referred to as syllabics. Unlike European languages, where for example the letter ‘v’ and the letters ‘a’, ‘i’, ‘o’, and ‘e’ are always represented as discreet glyphs, in Canadian Aboriginal Syllabics the vowel is indicated merely by the orientation of the consonant. (see explanation below).

As seen in the top row above, base vowels ‘e’, ‘i’, ‘o’ and ‘a’ are the same triangular form, rotated 90° to indicate each different vowel sound. In the two subsequent rows, consonants are rotated in the same fashion to inflect each one of the four vowels. From Syllabics typographic guidelines and local typographic preferences, Kevin King for Typotheque, January 2022

The original Canadian Aboriginal Syllabics were created sometime in the mid 19th Century. In the settler version of the story, they were created for the Swampy Cree in and around Norway House, Manitoba in 1840 by Wesleyan Methodist Christian missionary James Evans, a linguist who had previously worked with Indigenous communities in Ontario. In 1841 Evans built a rudimentary printing press and printed the first book in syllabics, the Cree hymnal (below). The Cree syllabics were quickly adopted by several other first nations, including the Inuit. 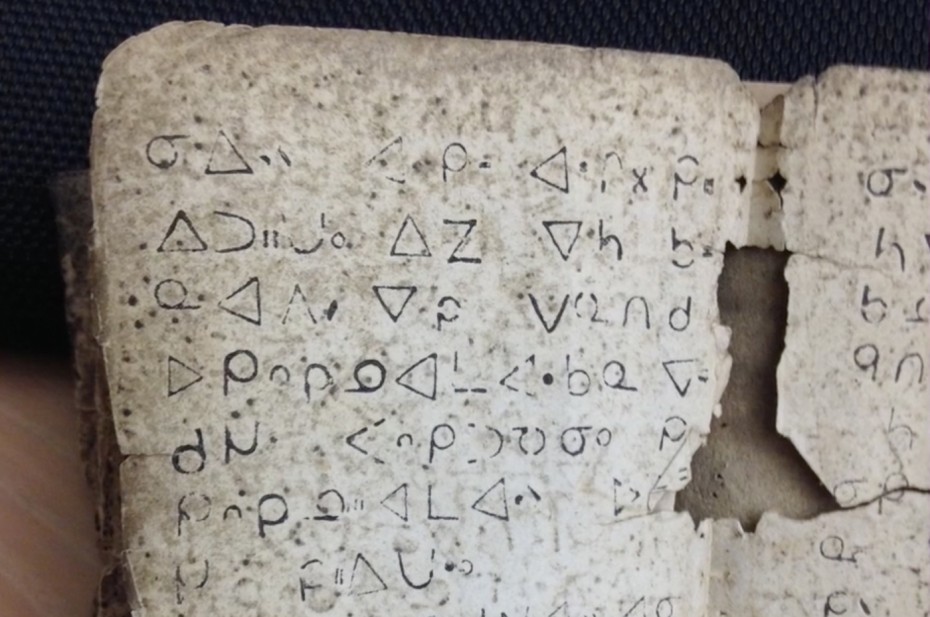 But in the Cree version of the story, it wasn’t a settler who brought syllabics to the Cree. It was  the other way around. A Wood Cree named Mistanâkôwêw, or Calling Badger from the Stanley Mission area in what is now Saskatchewan, is said to have brought the syllabary to the Cree a decade before Evans printed his hymnal.

Twenty-two years ago, Winona Wheeler, Associate Professor of Indigenous Studies at the University of Saskatchewan and a member of the Fisher River Cree Nation wrote a paper called Calling Badger and the Symbols of the Spirit Language: The Cree Origins of the Syllabic System, which argues in favour of the Cree version. According to a June 2020 CBC News article by Walter Strong, she called the Evans narrative a “great Canadian myth”, typical of “the colonialist/conqueror renditions of the past”, noting that no settlers bothered to ask the Cree for their version of the story. 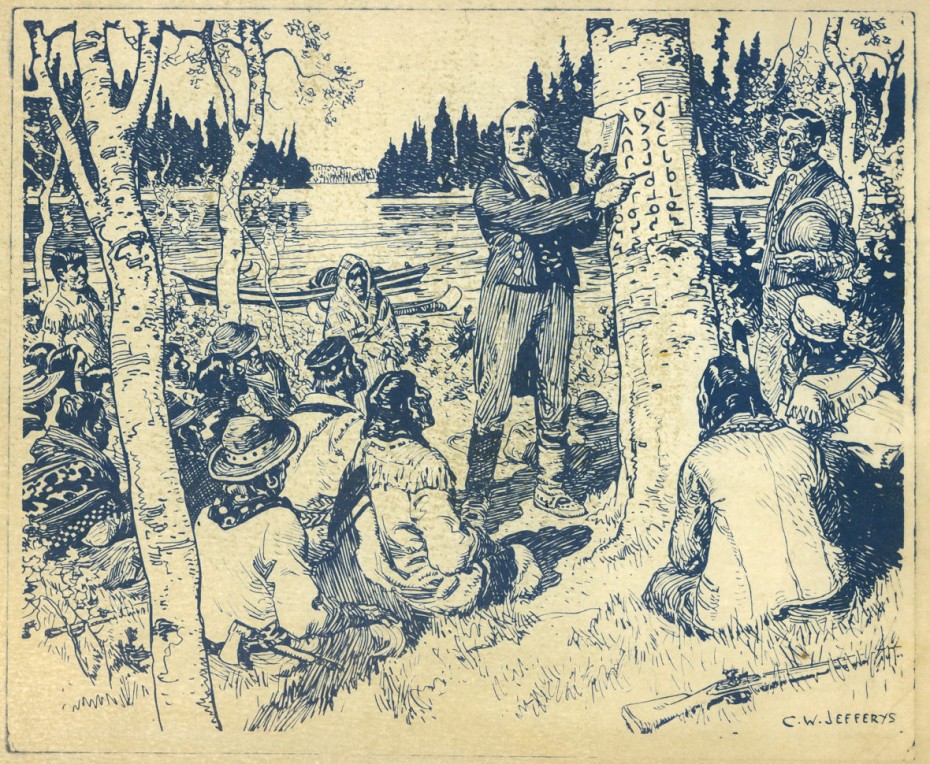 When your language is taken from you as it was from so many of Canada’s Indigenous people during the long and painful process of colonization, so too are your identity, your spirit and your power. The settler myth was kept alive by images such as CW Jeffreys’ drawing depicted above. Jefferys was a prolific illustrator of the colonialist version of Canadian history, published in many history books during the first half of the 20th century. And so the settler version of the syllabics story stuck.

The tragic stories now coming out of the former residential schools provide plenty of shameful evidence that Indigenous language was literally beaten out of the children who attended. It’s a testament to the language keepers that syllabics have survived so many attempts to extinguish Indigenous language. Typotheque’s work honours their resilience.

It should be stressed that Typotheque’s approach was to begin the process by carefully listening to the needs of the Indigenous language keepers, and only when those were clearly understood did type designer Kevin King set about his work, iteratively consulting with the language keepers along the way. By approaching the task with humility, empathy and respect, Typotheque has not only helped preserve and revitalize these languages but has in its own way contributed to the process of reconciliation and healing. 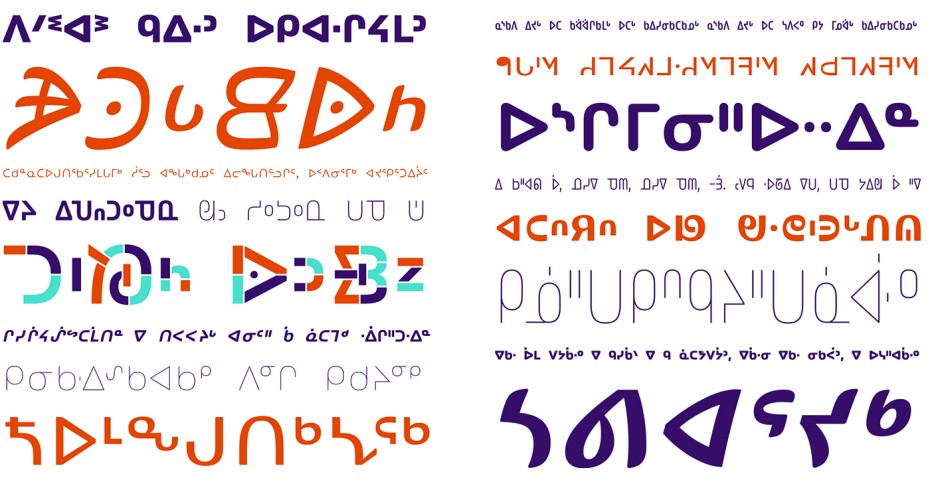